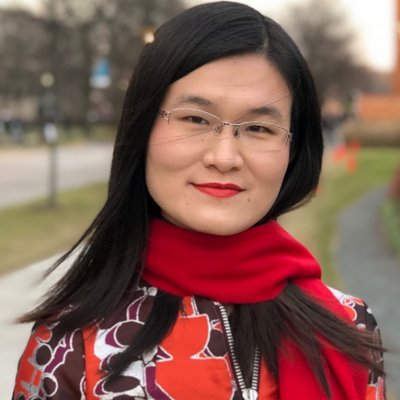 Yangyang Cheng is a postdoctoral research associate at Cornell University and a member of the CMS experiment at the Large Hadron Collider. Born and raised in China, Cheng received her Ph.D. in physics from the University of Chicago in 2015 and her Bachelor of Science from the University of Science and Technology of China’s School for the Gifted Young. Her writings have appeared in The New York Times, Foreign Policy, MIT Technology Review, ChinaFile, Bulletin of the Atomic Scientists and other publications. She is a regular columnist at SupChina and has appeared on the Sinica Podcast.

The following interview is part of a YCW series on the different aspects of China’s COVID-19 response.

Young China Watchers (YCW): You were born in China and moved to the United States in 2009 to pursue your Ph.D. in Physics at the University of Chicago.

During your decade living in the U.S., how have your opinions and understanding of the U.S.-China relationship changed and matured? How has your passion for both science and writing allowed you to dissect and understand these differences? In this time of great upheaval caused by the spread of COVID-19, how may the U.S. and China find common ground and work together to deal with this global health challenge?

Yangyang Cheng (YYC): I was 19 when I arrived in the U.S., so I think — or at least hope — that I have matured on a few fronts! There is a saying that one needs to know English to know China, which is really tragic in terms of how much censorship has inhibited a Chinese person’s knowledge and understanding of her own country, in particular its history. Since moving to the U.S., I have tried to read more on Chinese history that is not documented by or for the “victors,” as well as U.S. history written from different perspectives. These, in addition to paying close attention to the news, have helped me gain a better understanding of both my birth country and my adopted home. I held no illusions about the Chinese government’s authoritarian nature or the American empire’s troubled history before I came to the U.S., but the extent of human suffering that I have learned is something I still struggle to grapple with.

As a reader, I recognize the power of words to bear witness, to educate, inspire, and provide company. That also translates into my motivation to write, especially as a woman, an immigrant, a Chinese person writing in English: I recognize that I exist and write from the margins. It is both my vulnerability and my power.

I have never seen my writing and my science as disparate endeavors: Both are integral parts of my identity. I have worked as a particle physicist for over a decade: I study the most fundamental components of nature, their origins and evolution; in that sense, I am also trying to reconstruct a genealogy, where the universe came from and where it is going to be. I document events as I see them. I ask questions. I pursue the truth. That is my work, whether for cosmic or carnal affairs.

In particle physics, I am part of a large international collaboration spanning dozens of countries, hundreds of institutions and thousands of individuals. Despite the many shortcomings in practice, the experiment aspires to a cosmopolitan ideal: that the pursuit of a shared goal, unrelated to military defense or material gain, can transcend geopolitical boundaries. What COVID-19 has brought to sharp focus is the limitations of the state as an organizing unit, that the exercise of state policy for state interests can be contradictory to the people’s well-being. An example of this is the deteriorating relationship between the U.S. and China, and the practice of political opportunism on both sides of the Pacific. To find common ground, policy makers as well as the general public must rethink the concept of “national interest” and understand that borders are imaginary: A national border protects a political entity, an ideological construct, but not much else, and the so-called protection is achieved at great harm.

YCW: In your recent NY Times article “Of the Virus and God, Orange Peels and the Party” you relay conversations that you had with your China-based mother during the COVID-19 lockdown in China earlier this year. The piece touches on your mother’s commitment to both religion and government, and how your views differ on each topic.

YYC: I would caution against over-emphasizing “generational difference.” First of all, I wrote a personal story involving two individuals, my mother and I; neither of us is representative of a generation, if such representation exists (it does not). From the feedback I have received, I know much of the essay resonated with many people across ages and cultures, and I am deeply humbled by it. As a writer, I cannot assume a uniform perspective, but I recognize the universality in certain human experiences, especially when it comes to parents and their children.

More importantly, I think in any generation, the people who actively challenge the system are in the minority. Most people accept the world as is and try to find their place in it. In an unjust world, does passive acceptance indicate intellectual laziness or moral cowardice? Maybe. But it is also — in many situations — a prerequisite for survival, and to live is a brave and noble thing. If there is any age-related factor in this distribution, it is this survivor bias: People who are older, like my mother, have put up with the world as it is for longer and made more compromises. They have seen how much rebellion and dissent can cost, and try to dissuade their children from taking such risks. I wrote in a column for SupChina last summer that “In an unfree world, to live freely is the loneliest, most selfish act.”

“In an unfree world, to live freely is the loneliest, most selfish act.”

YCW: In your recent SupChina piece “In Sickness and in Health”, you highlight the structural problems that exist within China’s health care sector, noting the struggles faced by patients seeking essential care and the pressure placed on medical workers who are often met with anti-social behavior in the workplace. In the article, you draw on your own experiences as a child seeking care at Chinese hospitals and the lessons learned from that time.

YYC: I grew up in Hefei, an inland provincial capital that during most of my childhood was still underdeveloped. Its neighboring villages are some of the poorest in China. My single mother worked as a school teacher and has extended family in the city. I was sick quite a bit as a young child, and I noticed how uneven and arbitrary the health care resources appear to be distributed. I felt humiliated by my family’s humble circumstances, but also indignant that my access to doctors and treatment seemed reliant on my mother’s personal connections. I found that to be a great injustice: What about the people who did not have local connections? I even railed against it in my diaries, accusing my mother of being “corrupt.” My mother found that to be cute — I guess — but even then, she was getting worried about her 8-year-old’s outspokenness.

I think a pandemic like COVID-19, as any major health event, definitely has an impact on the public’s view of their country’s health care system as well as governance in general, and this is not limited to China. How such a view may change is dependent on a person’s own experience through this event: If they and their loved ones have been able to weather the lockdown in stable homes and remain relatively healthy, they are likely to gain a more positive outlook on the government’s capabilities, which I think is the case for the majority of Chinese people, simply judging from the extent of the outbreak and the unemployment figures. But for those who have suffered the loss of lives or livelihoods — and especially if they feel wronged by the government — the trauma can shatter any previously held belief of a benevolent state that takes care of its people.

YCW: Furthermore, your SupChina piece “In Sickness and in Health” examines the Chinese government’s response to the COVID-19 pandemic in Wuhan. Your analysis touches on the potential for racial discrimination against individuals of Chinese origin. You note that “a virus does not recognize human borders, but people are quick to draw lines between us and them, paranoia breeding discrimination.”

You wrote this piece in January 2020, and since that time the virus has spread to your country of residence, the U.S.. As a result, many cases of racial discrimination against Asian Americans have been reported. As an American-based Chinese, how does this impact your life? What has been you experience as a Chinese national working in science in the U.S.?

YYC: I have continued writing about COVID-19 and its impacts in my columns this year, and touched on the issues of racism in both February and April columns.

I think one very direct impact is that now each time I go outside, which I keep to a minimum, I take into consideration the possibility of harassment or even attacks because of my ethnicity. I have always been aware of racism in this country, but that physical vulnerability as a quotidian danger is new. It has in some ways helped me gain perspective on what it might have felt like being Muslim in America after 9/11, or being Black or Native American on any given day. There is a new degree of alertness, of being conscious of my body and its passage through society.

As part of a large international collaboration with colleagues across many time zones, I am quite used to virtual meetings and working remotely. I do not have teaching duties or dependents to care for, so I have been privileged in the sense that my day-to-day work itself has not seen much disruption due to the quarantine orders. However, outside of the immediacy of my home office, there are many troubling trends happening: immigration restrictions, ethnic-based scrutiny on Chinese scientists in the U.S. and the heightened rhetoric of racism and xenophobia in general; all of these have a negative impact on minority scientists in the targeted groups and on the advancement of science towards a more just, equitable future. When faced with a common threat, the world is becoming more fractured and new technologies are quickly being purposed to further divide than unite. To consolidate rather than democratize power.

YCW: What China-related books or podcasts would you recommend to our YCW community?

YYC: I am not a regular podcast listener, but one recent series I enjoyed is “Heartland Mainland” on the Chinese communities in Iowa and the Midwestern state’s ties to China. The program is produced by Holly He and Matt Sheehan at the Paulson Institute and I highly recommend it.

Because of current events, I have taken an interest to scholarship on how illness, health care, or just the body in general relates to state power. Two books I found particularly fascinating are Emily Baum’s “The Invention of Madness: State, Society, and the Insane in Modern China,” and Sigrid Schmalzer’s “The People’s Peking Man: Popular Science and Human Identity in Twentieth-century China.” Ian Johnson’s “The Souls of China: The Return of Religion After Mao” is a beautiful book that I return to often. I have always appreciated Jeffrey Wasserstrom’s work, and his new book, “Vigil: Hong Kong on the Brink,” is a brisk, elegant read on one of the most important issues concerning China and the world today.