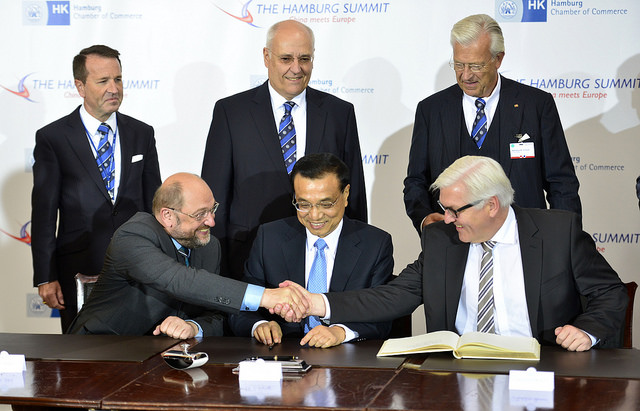 Following U.S. President Trump’s maiden visit to Europe, including his attendance of the G7 meeting in Italy and the NATO summit in Belgium last week, differences in the economic positions of the EU and the US have become readily apparent. Trump made no attempt to backtrack on promises to partially reign in free trade with Europe, and it appears unlikely that he will maintain his predecessor’s commitment to the Paris Climate Accord. German Chancellor Angela Merkel, visibly frustrated with the new U.S. administration, even discarded her usually sensitive language to bluntly call upon Europe to take its future into its own hands.

A turning tide under Trump

Within the first months of Trump’s presidency, the tide of global trade politics has rapidly turned. While China’s President Xi Jinping served as a helmsman of global free trade and economic globalisation at Davos, in contrast Trump proposes a protectionist approach. His trade policies include increasing tariffs, retreating from the TPP, and—together with U.S. Treasury Secretary Steve Mnuchin—blocking statements supportive of free trade and climate change resolutions at the recent G20 finance ministers’ meeting in Baden-Baden, Germany, and the G7 meeting in Sicily last week.

Employing such rhetoric, the U.S. seems to be giving up its claim on global ideological and economic leadership in favor of “America First.” China stands ready to fill the resulting vacuum.

So too can Europe, and especially Germany as current G20 President, play a significant role in promoting free trade and cooperation on climate change. In particular, the G20 Presidency can serve as a tool to shape the global agenda and strengthen relations between China and Germany, bilaterally, and Europe, multilaterally.

Germany is well-positioned to promote international economic stability, free trade and a healthy global investment climate. Using its G20 presidency, it can contribute to setting the 2017 trade agenda and adopt a counter-position to U.S. protectionism. Merkel can take up G20 initiatives shaped by China’s G20 presidency in 2016, not only deepening its relationship with China, but using those initiatives to exert a certain level of pressure on the Chinese government to follow through on its announcements on free trade and investment, improve its investment climate domestically and allow for reciprocity.

The first signals of a Berlin-Beijing front were already visible in a phone call between Merkel and Xi shortly before the German Chancellor visited Trump in mid-March. Last week, the German Foreign Minister Sigmar Gabriel paid a visit to China and, just a few hours ago, Merkel and Li stood side-by-side in Germany. The upcoming G20 summit in Hamburg, in combination with Germany’s current role and a coordinated EU approach, create an opportunity for EU-China relations to leap forward.

Of course tensions persist, from disagreements over China’s Market Economy Status to increased Chinese investment in sensitive sectors of the European economy. The recent proposal by the EPP, the largest political group in the European Parliament, as well as a joint proposal by Germany, France, and Italy asking the European Commission to tighten rules for foreign investment into the EU, could spoil the opportunity to improve relations.

This week presents a good opportunity for EU and Chinese leadership to demonstrate their mutual commitment to bolstering cooperation. The EU-China summit between Li, European Council President Donald Tusk and European Commission President Jean-Claude Juncker, and European heads of state, in addition to bilateral meetings with Merkel and Belgian Prime Minister Charles Michel, can pave the way for a successful G20 summit in July. And addressing any outstanding frictions in the interest of an ever-closer partnership would only draw a greater contrast to the cooling relationship between the Trump-led U.S. and the EU.

As Trump Rocks the Boat in the EU, New Opportunities for China Arise