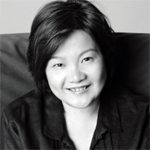 Often referred to as ‘the Oprah Winfrey of China’, Hung is a Beijing native who was educated in the US and is now CEO of China Interactive Media Group. She is a publisher, actor, entrepreneur, and one of China’s most popular bloggers. In 2011, Time magazine selected Hung as one of the world’s 100 most influential people.

In 2010, Hung opened the design concept store Brand New China (BNC) to provide consumers direct access to the work of Chinese designers. Currently, more than 150 designers have signed with BNC and the work of more than 100 designers are sold in store, including apparel, home ware and accessories.

Powerful women are often perceived as suspicious characters in Chinese culture, so how do women cope with top jobs in what is still a man’s world?

Beijing – ‘Yes, She Can: How Women Succeed in China’ with Hung Huang, CEO of China Interactive Media Group