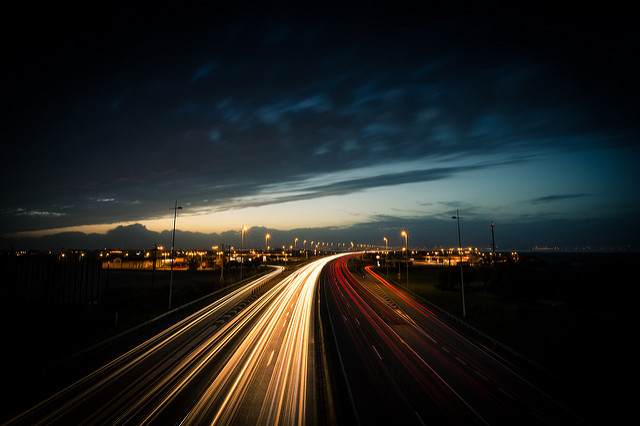 Most Western European countries have not engaged with China as proactively as the UK, although this could help bridge their evident infrastructure gap. Credit: Flickr / p_valdivieso.

“China is spending more on infrastructure than the U.S. and Europe combined,” finds a recent study by McKinsey & Co. At the same time, Europe lags behind in desperately needed investments in its infrastructure, and its “existing asset base is wearing out.” Europe seems distracted by a range of internal problems: an ongoing sovereign debt crisis; “Brexit” highlighting attempts of re-nationalization; and the challenges of a very low interest rate environment.

Economists realize that the long-praised powers of monetary policy alone appear to be unable to kick-start the economy. Monetary policy needs to be accompanied by fiscal policy to achieve long-term growth, and infrastructure investments are a key element of fiscal policy stimuli.

The IMF in particular calls on Europe’s largest economy, Germany, to set an example on structural reforms to boost the fragile economic recovery of the Euro area. Indeed, the German government has presented plans to increase investments in infrastructure, which are sorely needed. For instance, a 2012 report by the Commission on Transport Infrastructure Financing found that 30 percent of German rail bridges are more than 100 years old. However, the current paradigm of balanced budgets as the ultimate goal of successful fiscal policy in many European countries, ignores: a) the need for investment in Europe’s infrastructure, and b) the opportunities of cheap funding for sovereigns in the current low interest rate environment.

From 1992 to 2011, China spent on average 8.5 percent of its GDP on infrastructure projects, overshooting the necessary amount argued by some. For the same period, the EU invested 2.6 percent of GDP, a figure which has since dropped to 0.5 percent of GDP. China’s approach has significantly contributed to the country’s continuous double-digit GDP growth for the past 30 years. The current situation, in which China continuously invests in its own infrastructure and increasingly those of other countries, appears almost comical compared to a European community that – while advising developing nations on economic development – has seemingly forgotten about its own needs.

The current situation, in which China continuously invests in its own infrastructure and increasingly those of other countries, appears almost comical compared to a European community that – while advising developing nations on economic development – has seemingly forgotten about its own needs.

Currently, China acts as global promoter of infrastructure developments not only within its own territory, but also the wider APAC region, Central Asia, South America, and on the African continent. The Chinese government has launched initiatives and institutions to this end, such as “One Belt, One Road” (OBOR) and the Asian Infrastructure Investment Bank (AIIB).

In addition, China has started to build strategic partnerships with various European countries. Its strategic vision for OBOR not only entails upgrading the infrastructure of China’s direct neighbours, but also enhanced transportation routes reaching deep into Europe. Whereas last year Shaohua Yan concluded that there was “little serious research in European academia on the OBOR initiative, nor any real discussion at the official level,” today a number of countries, especially in Central and Eastern Europe (CEE), have welcomed Chinese capital as part of the OBOR initiative.

However, the relationships, frameworks, and understanding of China as a strategic partner, remain ambiguous across Europe. With CEE countries, China has engaged in the 16+1 Cooperation Framework, which serves as a platform for fostering Chinese-funded infrastructure projects. While regular multilateral meetings are held, investment deals are signed on a bilateral basis. Several participating countries, such as Hungary and Poland, have signed MoUs with China on its OBOR initiative, although these MoUs seem to lack substance and tangible outcomes.

Under its OBOR initiative, China also engages multinational European institutions such as the EBRD via the AIIB and its Silk Road Fund. The Chinese government has furthermore announced that it will contribute to the European Fund for Strategic Investment (EFSI), designated for projects in the EU. This cooperation between the EU and China is, for instance, coordinated through the Connectivity Platform, launched in 2015. 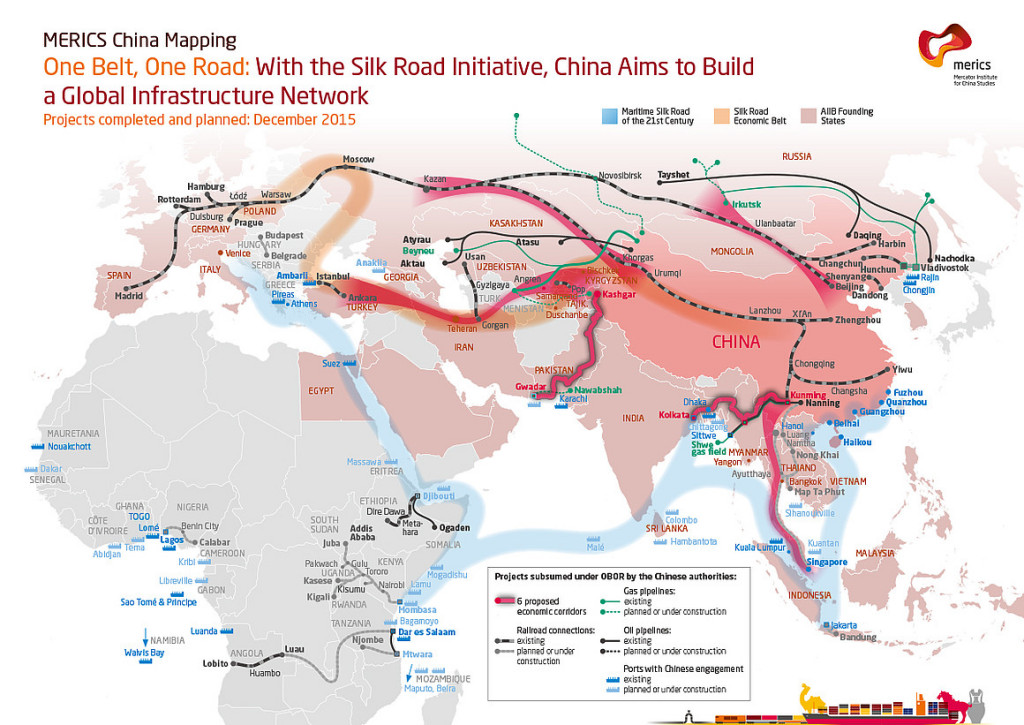 “One Belt, One Road: The Silk Road” infographic by MERICS.

Theresa May’s recent comments on plans to significantly increase the government’s infrastructure spending demonstrates the UK’s strong motivation to foster these investments. Her commitment to Hinkley Point C is another example of such cooperation in energy infrastructure. Overall it can be argued that the UK’s bilateral relationship with China, including the creation of political and business frameworks, serves as a complementary and beneficial channel for cross-border infrastructure investments. Unfortunately, most Western European countries have not engaged with China as proactively as the UK, although this could help bridge their evident infrastructure gap.

To date, the UK attracts the largest share of Chinese FDI in Europe, trailed by Germany, which sits below the European average when it comes to investments in transport and infrastructure. In Germany, several recent projects with Chinese investors, mainly around German airports (Frankfurt-Hahn, Lübeck, and Parchim), have run into difficulties. Whereas Chinese investors had big plans to transform the regional airport of Lübeck into a hub for aviation training, and aimed to use Parchim International as a tourism hub for flights to and from China, after several years the projects failed or struggled to reach the ambitious goals of their investors. In June this year, the government of the German state Rhineland-Palatinate aimed to sell Frankfurt-Hahn airport to a Chinese investor. However, payments were delayed and the deal was ultimately called off.

Besides shortcomings in risk assessment on the German side, another conclusion is that Chinese investors may not be sufficiently well-informed about the German investment and regulatory environment and vice versa. Initiatives such as the UK’s Infrastructure Alliance could prove valuable in this regard. In the German case, a similar framework might be developed with Germany Trade and Invest (GTAI), the national economic development agency.

Coordination across the continent

These bilateral initiatives can only be a start. Investment promotion needs to be better coordinated across all EU member states, in particular for trans-European and cross-border projects. Chinese investments into Europe are growing rapidly, but have shown few concrete outcomes in the infrastructure sector. Especially due to the ongoing privatization trend of infrastructure projects across Europe, including in many Western European countries, the number of private Chinese investors is rapidly increasing.

The significance of high-level political frameworks as a foundation for economic and infrastructure cooperation is not to be underestimated in the Chinese context. Infrastructure projects have long planning phases, and therefore patience and commitment to further framework-building is key. More Western European countries should engage in bilateral talks with China on these issues, taking the UK’s Infrastructure Alliance as a template.

Forums that focus on particular investment environments at a national level can provide Chinese investors with the necessary understanding of local rules, requirements, and regulations, thereby mitigating the danger of setbacks, such as those experienced in Germany. Whereas cooperation on a European level through the above-mentioned multilateral agreements is important, it lacks the granularity and specificity many investors require.

It is therefore paramount that European governments become more proactive in targeting foreign investment, in order to attract and shape valuable investment projects in their countries and to bridge the infrastructure gap in Europe.

Bridging the Gap – Cooperation on Infrastructure Investment Between Europe and China