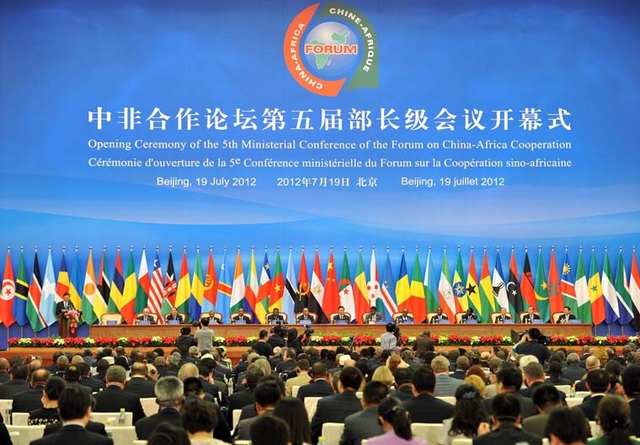 Leaders at the 5th Ministerial Conference of the Forum on China-Africa Cooperation, held in Beijing in 2012. Credit: GovernmentZa / Flickr.

The second summit and sixth ministerial conference of the Forum on China-Africa Cooperation (FOCAC), the main political forum for China-Africa relations, will be held in South Africa this December. Government leaders from China, 50 African states, and the Commission of the African Union will convene for the highest level meeting since 2006.[i]  Past FOCAC conferences have seen a series of commitments between China and African countries, strengthening trade, investment, and cooperation in other fields such as diplomatic support in international fora. They have also served as a platform to establish the China-Africa Business Conference and the China-Africa People’s Forum. FOCAC draws increasing attention from media and experts alike, serving as a simple representation of “China in Africa”. But Chinese engagement with African states deserves a more nuanced approach based on two factors: the definition of “Africa” and different actors’ perceptions.

A reflection of “China in Africa” is long overdue. With interest on this topic only growing, the public image of China-Africa relations is predominantly negative. Mainstream media often promotes simplistic rhetoric or stereotypes. And as actors and perceptions diversify, it seems impossible to make a true statement about China’s engagement in Africa.

Not only is the term “Africa” contested, but its usage is not reflective of the wide range of divergent cultures, peoples, and political attitudes on the continent. While “China” is a well-defined termfor the People’s Republic of China, researchers and journalists frequently use the term “Africa” contiguously, lending a false impression of an equally precise definition. On the contrary, conceptions of “Africa” involve manifold notions of discourse, power, location, representation, geopolitics, and identity. Homogeneous “African” positions do not exist to the degree that journalists and academics uphold. An even more nuanced approach could equally distinguish between different Chinese actors and differentiate between their interests. 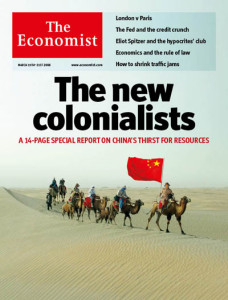 A cover of The Economist from March 2008.

The one-size-fits-all approach of FOCAC operates on a similar rationale, and hence also might not serve as the best forum to understand the diverse needs and interests of African countries. Further, FOCAC is criticized as a political ceremony that has little bearing on the lives of ordinary Africans, with heads of state meeting behind closed doors in a remote setting. Instead of high-level summits, “China in Africa” is unfolding on the ground. Yet what indeed is happening on the ground is difficult to assess; while economic analyses tend to be narrowly focused, big-picture impressions overlook the complexities of reality.

A systematic comparison of the perspectives of four key stakeholders—the Chinese government, African government officials, Western academics, and African academics—can better shed light on this reality. By assessing each group’s perceptions through their publications, policy documents, and interviews, this analysis revealed the entanglements inherent in this topic. (Of course, this analysis presumed homogeneity of admittedly constructed groups. The Chinese government is the easiest to justify, but what makes a “Western” academic or an “African” academic? Whereas the former referred mainly to academics from universities in Great Britain and the United States, the latter included authors who self-identified as African.)

The examined actors agreed that: competition exists between Chinese and Western ideological approaches; trade imbalances disadvantage African countries; and the image of China within African societies is rather poor.[ii]  But differences in their views dominate the picture. The four groups diverged when comparing Chinese- and Western-implemented projects, measuring the impact of trade deficits, and supporting Chinese development policies as models for African countries.[iii]

All groups found it difficult to classify China as either developing or developed. Chinese and African government officials focused on the perceived strengths of “Africa,” which were, interestingly, natural resources, the power of media in shaping opinions, and policymaking capacity. In contrast, both groups of academics focused on perceived weaknesses, such as weak governance structures, a lack of skilled labor, and dependency on external powers.

The stark and almost diametrical perceptions of “Africa” between government officials and academics exemplify the demand for a more nuanced approach. As always, reality is more complex than catchy terms like “China in Africa” suggest. So what is the way forward? How can we speak, write, and perform research on Chinese engagement in African countries, while avoiding the pitfalls of conventional reporting?

Ahead of the summit, The China Africa Project developed a guide for reporting on FOCAC, including a publication debunking five widely believed myths about the Chinese in African countries (e.g. Chinese firms only hire Chinese workers). The China-Africa Reporting Project recently hosted a roundtable for international experts and journalists writing about FOCAC. Without doubt more research is required on Chinese engagement with different African communities. But equally necessary is a constant reminder of the multiplicities of actors, locations, languages, and experiences inherent to “China in Africa.” Responsible analysis should reflect the nuances of language and different perceptions of this complex issue.

Insa Ewert is a Marie Curie Research Fellow and Doctoral Candidate at the German Institute of Global and Area Studies (GIGA) in Hamburg. This article is partly based on research conducted for her master’s thesis at the University of Vienna.

[i] Burkina Faso, São Tomé and Príncipe, the Gambia, and Swaziland are not members of FOCAC, as they do not adhere to the “One China” principle and maintain official diplomatic relations with Taiwan.

[ii] China emphasizes the following principles in its relations with Africa, based on the Five Principles of Peaceful Coexistence: sincerity, friendship, and equality; mutual benefit, reciprocity, and common prosperity; and mutual support and close coordination. The only conditionality China applies to its financial support is adherence to the “One China” principle. This contrasts Western policies of financial support, which often include conditionalities (e.g. World Bank and IMF lending clauses regarding human rights and democracy).

[iii] Although Chinese and Western approaches may differ in ideological terms, in practice China’s policies differ little from those of “Western” countries. This is significant as governments tend to make decisions based on strategic interests rather than ideals.

“China in Africa”: A Reality Check