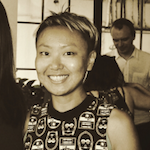 Alice Xin Liu is a writer and translator. Born in China, she graduated from Durham University, studying English literature. Since arriving in Beijing in 2007 she has worked as a news assistant for the The Guardian, China Editor for Index on Censorship, editor at the Financial Times-affiliated Danwei.org, and Managing Editor of Pathlight: New Chinese Writing. Alice has translated two books: “The Letters of Shen Congwen” and “The Problem with Me: And Other Essays on Making Trouble in China,” by Han Han. Her freelance writing has appeared in n+1, Granta, The Guardian, Asymptote and other places. She is working on a novel.

Young China Watchers (YCW): How did you end up becoming involved in translation work and NüVoices (女性作家联盟)?

Alice Xin Liu (AXL): I was born in Beijing and moved to England when I was seven years old. I kept coming back every summer and came back full-time in 2008 after graduating university, where I studied English literature. I’ve been working in China now for 10 years, first at The Guardian in Beijing as a local translator, then at danwei.org, started by Jeremy Goldkorn, as an editor and translator. Afterwards, I worked as an editor and on translations, including Han Han’s book of essays, “The Problem With Me and Other Essays.” Now I’m working on a novel.

For NüVoices, my official title is Translation Director. But the structure is very organic; we all take on new roles as there’s a need. If we get Chinese pieces submitted by Chinese women writers, then I’ll be overseeing that and also commissioning the Chinese writers I know, who mostly live in China. But we will have a WeChat account for pieces written exclusively for the Chinese network, so there’s a network for more than just English-language material.

YCW: Why do you think the artistic and media landscape covering China was and is in demand of a collective such as NüVoices? Does the play on words with nü/new imply that women are a new voice?

AXL: It started as a directory of female sources that Joanna Chiu created explicitly so that more women experts could be quoted in stories and invited on panels and such. She sent the directory around to other writers and it just blew up. A while later she contacted me and some others, and we formed a board of about 12 people discussing this issue of female representation. It kind of blossomed from there: We all decided to pitch in and create an anthology of work by female writers. We ended up launching the network in Shanghai, Beijing, Berlin, Taiwan, and Hong Kong. We were planning parties where lots of women showed up, and both local and expat women started saying things like, “I can’t believe this exists,” and “There’s a huge need for this, where has it been all along?”

“There’s a huge need for this, where has it been all along?”

Most of us have really impressive working lives and skills, but we’ve never been represented in the media. People always know the white man that you worked with; people know my partners on the projects we’ve done together, but they don’t necessarily know me. For example, if you’re with a colleague and he’s white and male and you’re Asian and female, you’re usually assumed to be an assistant or a lesser person in that situation. It’s never the case that we’re doing less; maybe you’re doing more, because as woman we end up doing more emotional labor. We just do. The disparity in our working lives has been so apparent. And for that reason, the stories told by women, particularly stories of Chinese and the Chinese diaspora, are not being told. Bookstores and publishers have existing structures with previously represented writers.

YCW: What are the short and long term goals for NüVoices? Do you hope to create a media outlet or networking collective or both?

AXL: I envision global domination. Our anthology will be launched next year and our podcast will be launched this week. In the future, I can see having special conferences and having everyone join: women and allies. So many men have supported our project. They’ve helped us produce so much work, so long-term I can see conferences with women and allies coming, as well as more launches. We want women to set up their own chapters. It’s not about any of the board members being the leaders in every location; any woman can be a leader.

It seems radical, which it really isn’t at all. When you unearth these uncomfortable truths and people do a stop-and-take—they’re really surprised by what they see. I’ve become more brave because of Joanna; I was really inspired by the honesty in her recent article for Foreign Policy. When others are courageous, we become courageous. That has had a ripple effect throughout the environment.

YCW: China has a complicated relationship with gender equality, as its degree varies greatly depending on region, class, and other factors. Similarly, the nation also has a very complex understanding of journalism, media, and truth. Considering the daunting combination of these issues, what unique challenges do female journalists and writers in China face?

AXL: Women and men will face exactly the same issues regarding censorship. I haven’t started commissioning Chinese women writers yet, so it’s hard to say. From what I can see, I would say that Chinese women writers are even more courageous and genre-bending, sometimes sharper. Men are more limited in criticizing the authorities or systems of power that allowed them to rise to popularity in the first place.

YCW: What topics are underreported on in China due to gender inequality among publishers, journalists, and writers?

AXL: Women’s stories, stories about sexual abuse, stories of women’s friendships. I think it tends to be the same as the West. Men will be more vocal and will advocate their work more; it’s the same all over the world. So what will happen is women will have their own stories and they tell their stories through writing or blogging or novels, but those stories are just not being amplified. The only way to get those voices heard is to intentionally amplify them, and that’s what we hope to do. The stories and content are already there; they’re just waiting for a platform.

“Men will be more vocal and will advocate their work more; it’s the same all over the world.”

YCW: What advice would you give women in your field hoping to work in China or cover China-related topics?

Secondly, find mentors. They’re incredibly important and they’re always been the reason behind my career shifts. They always come along at the right time. So when you’re ready to go to the next phase of your career, be open to mentorship. If the person you want to mentor you can see that you’re open and ready to work hard, it’ll happen. If you have someone you want to approach, I’d say go for it and don’t be shy. Always be on the lookout to make yourself better. Mentorship has been really important in my life.