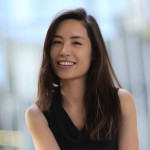 Julia Voo is Deputy Head of Policy and Ministerial Liaison for UK Trade and Investment at the British Embassy in Beijing. After moving to China in 2011, she worked in the Development section of the Delegation of the European Union, and then as a program and research assistant for EU-China relations at the Carnegie Endowment for International Peace. She was part of the UK Cabinet Office team that delivered the G8 Summit in Northern Ireland, and also consulted for the Anti-Human Trafficking and Smuggling project at the International Organization for Migration.

Young China Watchers (YCW): You’ve worked for governmental bodies since arriving to China. What drew you to the public sector, and what challenges have you encountered in these roles in Beijing?

I’m British Chinese. A personal challenge for me working for the European Union and the British government in China is overcoming the stereotype of what a European person should look like. At first, the stereotype caused confusion and was somewhat frustrating to deal with. Now, it’s just become a bit of an ice-breaker. Especially when people hear me speak Mandarin with an accent and get very interested in where I’m from. So I usually just give a 10-second overview of my ancestry before redirecting the conversation to whatever it is we need to talk about.

YCW: What are the most common concerns for foreign investors in China?

JV: Learning about the business environment in Beijing, whether that’s speaking with representatives from multinational corporations or becoming familiar with the thriving start-up community in Beijing, has been one of the best parts of my job.

Usually, problems between foreign investors and local businesses boil down to a lack of trust. This isn’t limited to China of course—it’s the same for any business in a new venture in any market. The language and culture can be intimidating, which is why doing your homework and seeking market expertise prior to engaging in a venture here is important.

YCW: As co-head of YCW Beijing, you launched the Carnegie-Tsinghua Center-YCW Mentorship Programme last year. What was the impetus for the program, and what rewards have you seen so far?

JV: I moved to Beijing with no support network. I would have been lost without my (now) friends, who gave me their time and great advice. A few years later, as co-head of YCW Beijing, I realized that we have a great group of young professionals with significant China experience. But the unique experiences of YCW’s members aren’t effectively shared through our usual speaker series. We wanted to further develop the YCW community, and our members were also enthusiastic to get more involved. We had the idea to leverage the YCW community to share meaningful information with people who are interested in building their careers in or around China.

It’s been a fun first year for us. We’ve had a great group of 13 mentors and 13 mentees getting together and sharing experiences and plan—it’s been fun and rewarding on both sides! I’m really looking forward to taking everything I’ve learnt from this first year and making the next year even better and open to more of our network. Although the program formally ended on 3 June this year, we will keep in touch with this year’s cohort and are excited to hear about their next steps.

YCW: What are the best ways to network as a young professional in China?

JV: Beijing is an easy place to meet interesting people. You’re unlikely to move to China without being a bit gutsy and curious about other cultures. The city has a lot going on, so finding someone with whom you share a genuine interest is not that difficult. Sign up for a class, go to a weekly food club, and attend speaker events! Don’t just elbow into a conversation, rapid-fire a handful of your business cards at everyone, and then vanish. Have real conversations and get to know people. Any networking event is successful if you can leave having had one meaningful conversation.