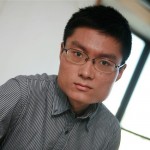 Ma Tianjie is the managing editor of chinadialogue’s Beijing office. He also writes a weekly blog, Chublic Opinion, on public opinion in China. Before joining chinadialogue, he was Greenpeace’s Program Director for mainland China. While at Greenpeace, he regularly commented on China’s environmental challenges for a range of media organizations. He holds a master’s degree in environmental policy from American University in Washington, DC.

Young China Watchers (YCW): Your expertise lies in the environment, a flashpoint issue in China today. What triggered your professional interest in environmental policy?

Ma Tianjie (MTJ): When I was an English major in university, I was introduced to environmental issues by doing freelance translation work for animal protection and environmental groups. One of my earliest translations from Chinese was a book called “Heaven, and Earth and I: Ethics of Nature Conservation in Asia.” I volunteered for environmental groups and was later inspired by a speech made by Dr. Gerd Leipold, then the Executive Director of Greenpeace International, at my university in 2003. After graduation, I joined Greenpeace’s Beijing office as a campaigner and have been active in the environmental field ever since.

YCW: China’s new Environmental Protection Law came into force in 2015, and the 13th Five-Year Plan also includes several green commitments. How comprehensive is China’s approach to protecting the environment, and what is your assessment of the government’s track record for implementation?

MTJ: On paper, China has already built up quite a comprehensive program to tackle pollution. The 10-point Prevention and Control of Soil Pollution Action Plan released on May 31, together with the Air Pollution Plan (2012) and Water Pollution Plan (2014), complete the list of ambitious central government plans to address the country’s environmental problems.

Translating words into action has always been a problem. But lately, with the introduction of the new Environmental Protection Law and the change in leadership in the Ministry of Environmental Protection, the government is on the right track to get its progressive environmental policies implemented at the local level. The new law has considerably empowered local environmental protection bureaus, which traditionally had their hands tied by local governments who controled their budget and staffing. It has also opened up new channels, such as information disclosure and public interest litigation, for the public to have a greater say in environmental law enforcement.

YCW: Moving beyond governance, China is one of the largest investors in clean technologies. How would you gauge the success of China’s forays into clean energy so far?

MTJ: In the past few years, renewable energy has developed at a breakneck speed. From 2014-2015, solar and wind energy capacity increased by 74 percent and 34 percent, respectively. But for such growth to turn into actual progress in the decarbonizing of China’s energy mix, other measures need to take place, such as power sector reforms. Lately, renewable electricity has been severely curtailed due to perverse incentives in the energy market. Beijing needs to eliminate bottlenecks like these incentives, which are stopping China from fully harnessing the increased capacity in renewable energy.

YCW: Your weekly blog, Chublic Opinion, sums up the public debate on current events in China. How would you describe Chinese public opinion on air and environmental pollution today? How has it evolved over the years?

MTJ: Chinese public awareness of the country’s environmental problems took off in 2012. At that time, the severity of Beijing’s air pollution was “inadvertently” highlighted by the U.S. Embassy. There was some degree of environmental awareness before that point, but the smog problem led to more people being significantly more aware and concerned. This public attention made environmental issues a problem that even top Chinese leaders had to take into account when making decisions about the development trajectory of the country.

New trends and technology emerged at the same as the smog controversy, boosting the number of people engaged with environmental issues. Activity on Weibo, for example, amplified the voices of a disgruntled urban middle class, whose case was further strengthened by online opinion leaders and celebrities.

YCW: How is the discussion of environmental issues—both online and offline—treated by authorities?

MTJ: In general, the authorities are pretty accommodating with regards to the public expressing opinions on environmental issues. There is a certain legitimacy attached to voicing environmental concerns since doing so is in line with central government policy: “Public participation” is enshrined in almost all the major environmental policies. Even when public opinion spills over from online to offline (for example, street protests against polluting factories or planned industrial projects), official responses have often been restrained. In many such cases, the government backed off from the original plans and made compromises to public demands, either by cancelling the plans or implementing a more open processes.

There are, of course, exceptions to the government’s typical approach. For instance, after Under the Dome, an independent documentary made by a Chinese journalist about air pollution in China, went viral on the Internet last year, it was met with strict censorship. The exact trigger of the decision to censor is still unknown but the widespread viewership of that video, which had hundreds of millions of views by the time it was removed, could have made the authorities feel threatened. After all, it showed that an independent take on the country’s environmental challenges was more successful than any work of state propaganda.

YCW: Even those with a moderate level of Mandarin fluency find it difficult to tap into China’s vast online communities and media. Can you offer any advice on how to engage with these communities? How important are Chinese netizens’ voices to producing analysis on China?

MTJ: I would say observe and appreciate the diversity of online opinions. They often take the form of clusters organized around key opinion leaders or forums. Identifying such clusters (and their relative relevance in the different issues) is very useful when trying to decipher the signals among the noise on the Internet.