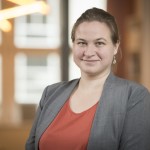 Mareike Ohlberg is a research associate at the Mercator Institute for China Studies (MERICS, a YCW Partner) and co-head of YCW Berlin. She holds a PhD in Chinese Studies from the University of Heidelberg and an MA from Columbia University. Prior to joining MERICS, she spent a year as an An Wang Postdoctoral Fellow at the Fairbank Center for Chinese Studies at Harvard University and another year as a postdoctoral researcher at the Cheng Shewo Institute for Chinese Journalism at Shih Hsin University in Taipei.

Young China Watchers (YCW): Tell us about how you first started studying China. How did you end up at MERICS, and what is your role there?

Mareike Ohlberg (MO): I first got interested in China in high school when I met friends from Hong Kong who taught me some Cantonese. I wanted to continue learning the language, but turns out it’s not so easy to find a program to learn Cantonese, so I settled on Mandarin. After graduating from high school, I signed up for a program at the University of Heidelberg, then got a scholarship to go to Beijing for one year to continue my language studies. I did my PhD at the University of Heidelberg, after getting a Master’s degree at Columbia University. Both in my language course and during part of my PhD research I ended up staying in Beijing. Later, I also spent some time in Hong Kong and in Taiwan.

After my PhD I initially thought about pursuing and academic career, so I continued doing research on China during a postdoc at the Fairbank Center for Chinese Studies at Harvard and another postdoc at Shih Hsin University in Taipei. I now work as a Research Associate in the Public Policy and Society and Media programs at the Mercator Institute for China Studies (MERICS), which is a Berlin-based think tank doing research on contemporary China. What I really appreciate about my job here is that it allows me to contribute to the current debate and to publish on issues while they’re still ongoing, which is challenging to do through universities.

YCW: In your report “Central Planning, Local Experiments: The Complex Implementation of China’s Social Credit System“, you refer to China’s system as “Credit Rating ‘Plus’.” How is China’s social credit system, both in its current state and in its projected scale, unique from systems in other countries?

MO: China’s social credit system is unique in some ways but also overlaps with what’s happening in other countries. In the present stage, much of what is going on at the central level with setting up the social credit system really is about collecting data from a broad variety of sources. China certainly is not the only nation that wants to aggregate data on citizens and compare that data in areas such as tax departments and banks. There are experiments going on elsewhere: In India, the Aadhaar Card is an attempt to tie data from different sources to a single identity; in the Netherlands, there’s that the System Risk Indication of the Ministry of Social Affairs and Employment, which is used to identify citizens who might be abusing the system. Even though China might be unique in terms of its ambitions for the social credit system, data collection and using data to rate people is more of a global issue.

The idea to aggregate data and use it to assess people certainly isn’t unique to China. Take financial credit ratings: Germany has the Schufa, a private company that assesses the credit risk of individuals and certain sectors. The algorithm for how your Schufa score is calculated is not transparent, and that is problematic in and of itself.

At the national level in China, there is no comprehensive citizen score, so it’s hard to say what the nationwide social credit system will look like in the end. But what can be safely said is that the social credit system in China isn’t just about assessing credit risk, even though that’s where part of the initial thinking behind the system comes from. But the way it has evolved now it has become more a tool to enforce potentially all laws, regulations and targets more effectively. Presently, it’s used to try to force companies to comply with environmental laws or production safety standards and to make debt defaulters repay the money they owe, but it can and has also been used to threaten those who don’t use Beijing’s preferred nomenclature on Taiwan. Hence the idea of credit rating “plus” or rather “plus plus plus.”

YCW: Can you talk about the positive and negative implications of China’s social credit system on parts of society, such as the economy and institutions like schools and hospitals?

MO: At the most basic level, the idea of the social credit system is to enforce laws or regulations or any other target that the government wants to set. It can have a positive effect in, for example, creating strong incentives for companies not to violate environmental regulations, or ensuring protective measures against food scandals like China has faced in the past. But the problem is that you are trusting the government with setting the criteria. It’s hard to preclude political criteria—it can be used against those who “endanger national security”, those “picking quarrels and stirring up trouble” or those “violating national unity”. It places a lot of trust in the Communist Party of China (CPC).

In terms of citizen affirmation, all you need is people not to be up in arms about it. At present there is not a lot of backlash, probably because there are no visible negative effects outside of a small number of people who are affected, such as being blacklisted for defaulting on debt. So long as the CPC succeeds in keeping the number of people severely affected relatively low, there’s a good chance there won’t be a lot of backlash.

People often say Chinese people are unaware or apathetic about this issue. I think most people everywhere are relatively uncritical about data protection if convenience is involved.

Here in Germany, there might be some vague sense that Facebook is doing stuff with our data that we may not be fully comfortable with, since that’s been in the news, but in the end, the convenience of connecting with friends wins out, and most people will keep their Facebook account.

As well, it’s very hard to organize in China. Part of the reason Europe has a fairly good track record with data protection is that people can organize. Even if the majority of people aren’t willing to take action, NGOs, watch groups or lawyers push for certain laws, whereas there’s more limited space for that in China. Pushing for a law to curb data use and abuse by the central government, for example, would be very hard to achieve. There is a data protection discourse in China and a legal regime around data protection forming, in part inspire by and based on the GDPR, but we will have to see how it is implemented, and in any case, that offers no protection from the government itself.

MO: There is some media reporting on the system in China, which usually is either very positive or addresses issues that need to be overcome, like implementation hurdles. Credit China is the main system to look up official information about it. There are great cartoons on there that explain how it’s going to solve all problems with dishonesty, some of them quite disturbing in their unabashed support for public shaming. There is also some advertising the system in public spaces, especially in experimental zones where it is already being implemented.

When I first started researching this, most people I spoke to in China didn’t know about it, whereas now it seems that almost everybody has heard of it and knows there’s something going on, whether from domestic coverage or reading international news.

YCW: Your research focuses on the gap between central government leadership and provincial government actors, who in many cases are the people charged with implementing the system. Are those disparities coming from ideological disagreements, differing understanding of what the system seeks to achieve, or merely the wide range of interpretations individuals might have of their role? How might this lack of unity complicate or threaten the social credit system?

MO: The idea behind our study was not necessarily to point towards the discrepancies between the center and localities, but rather to give a more nuanced overview of the current state of social credit implementation in China. You have certain initiatives at the center, focused on centralizing data and making sure data is accessible to the central government. Then you have pilots: For instance, at the beginning of this year, the center picked 12 cities out of a list of cities that were in other kinds of pilot groups before, and promoted them as model cities for setting up the social credit system.

Then there are a number of other initiatives being tested. It’s a complex undertaking, but at least in initial media reporting on the issue, the social credit system as a whole was often conflated with 芝麻 (zhima “Sesame”) credit, a commercial pilot run by Alibaba’s Ant Financial Services. It’s an interesting program and Alibaba is obviously a big player in big data, but use of Sesame Credit is not mandatory and government-led. In fact, the PBOC has refused to give Ant Financial Services a license. So my co-authors and I wanted to talk about these complexities in the implementation process. Government-led citizen rating, in those pilot cities where it does exist, is being carried out differently in different places. Some focus more on digital behavior, some are transparent with a catalog of behavior, and in other places people have no idea what might be impacting their score.

This is not unusual for China, where experimental zones are a key part of how policy is made: Different models are tried in different places; they’re testing what works and what causes backlash; and if something is seen as successful, it’s rolled out more widely. In the paper, we’re not trying to make a statement that there’s a huge discrepancy between the central and local governments, but rather emphasize that it’s a long process.