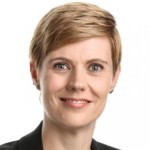 Dr. Merriden Varrall is Director of Geopolitics and Tax at KPMG and Nonresident Fellow at the Lowy Institute. From 2014-2018, Merriden was the Director of the Lowy Institute’s East Asia Program. Before this, Merriden was the Assistant Country Director and Senior Policy Advisor at United Nations Development Programme, China. She previously worked for the Australian Government. Merriden spent almost eight years living in China, during which she lectured in foreign policy at the China Foreign Affairs University. Merriden has a PhD examining Chinese foreign policy from Macquarie University, Sydney and the Vrije Universiteit, Amsterdam. She has a Masters in International Affairs from the Australian National University and completed her undergraduate studies at the University of Technology Sydney.

Young China Watchers (YCW): What is your “China story”? How did you pursue your interest in China while living and working in Australia?

Merriden Varrall (MV): This is a question I wish I had a much more sophisticated answer for. I wish I could say, “I scanned the strategic horizon, deployed my razor-sharp insights and concluded that China was the next big thing.” In fact, the real reason is fried rice. I had to choose a country to focus on as part of my undergraduate international studies degree and decided on China because I really love Chinese food. And once I had spent some time in the country I was hooked—yes, still on the food, but also on the society, culture, language, politics, etc. It’s an endlessly fascinating and wonderful place, in every aspect. It’s not always easy; in fact it’s often exhausting. But it’s always intriguing, and there’s always more to learn. The longer you’re involved, the more you come to realise you don’t actually know what’s going on.

My PhD topic was the product of having lived in China and studying Chinese foreign policy in my International Relations (IR) degree in Australia. The two experiences didn’t match up. My experiences of China simply did not make sense when viewed through the dominant “realism” IR lens. Constructivism’s notion that “people and ideas matter” provided an opening, a relevant analytical framework, but no real answers as to which people and ideas we were referring to. So I did a PhD in political anthropology to try and answer that question. My job at the Lowy Institute was a great opportunity to use what I’d learnt during my PhD research and keep building on it.

YCW: Can you tell us about your role as the Director of Geopolitics and Tax at KPMG? What is the connection between tax and world events, and what role does China play?

MV: I think for some of us who work in the foreign policy space, it’s self-evident that economic policy, including tax, is developed in a political context. However, for many in the business community, economic policy is understood as a matter of rationality and common sense. Of course, political risk itself is not a new idea. Many companies have been dealing with it for a long time. But today, as is often said, these are very complex and unpredictable times, and change is coming faster, harder and from more directions than ever. This means that doing business overseas, which includes navigating local tax systems, is becoming far more complicated than many in the business world have been used to. The “common sense” is harder to find. What I’m doing in this role is helping people understand the geopolitical context for tax policy and explaining where, when and why what should be rational, from a business perspective at least, might actually look very messy.

China is the biggest geopolitical story of the moment. It’s almost impossible to consider global trends, and in many cases, national political decision-making, without there being some connection to China. It is critical to understand where China is coming from and what it is (maybe) trying to do. The U.S.-China trade war is a perfect example. Some in the business community expect China to “act rationally” and see the “logic” of adopting particular economic reforms, and presume that after this many rounds of negotiations, a deal must be just around the corner. The internal dynamics and world-views within China suggest a different story.

Some in the business community expect China to “act rationally” and see the “logic” of adopting particular economic reforms, and presume that after this many rounds of negotiations, a deal must be just around the corner. The internal dynamics and world-views within China suggest a different story.

YCW: In your recent KPMG article “The Geopolitics of China’s Tax Reforms” you highlighted that tax in China is a highly sensitive issue. What are the positive impacts of these reforms for the Chinese economy and Chinese society?

MV: Anyone who has lived and worked in China will know that the Chinese tax system is complicated. I certainly remember being amazed and deeply confused by the black market, but also very public buying and selling of 发票 (fapiao, receipts) in subway stations and other dark corners, as a way to minimize the tax you were obliged to pay. The system has been in need of a fairly major shake-up for some time. A primary purpose of any tax system is collecting revenue for the government to spend on things, but of course all tax systems are designed within a political and economic environment, and with certain context-specific goals in mind. The reforms introduced in China last year started to address some important issues, both political as well as economic. The government needs to collect more revenue to pay for stimulus programs to keep the economy ticking at a time of slowdown.

At the time the reforms were introduced, income from individual taxes only made up less than 7 percent of total tax revenue, which is very low for developed countries, and the government wants to tighten that up. But at the same time, it wants to encourage consumer spending, so doesn’t want to overburden individuals who are already paying their taxes. So it is working on creating a tax system that does both. Overarching all of this is President Xi Jinping’s promise of creating a 小康社会 (xiaokang shehui, a moderately prosperous society) by 2020, including by adjusting redistribution to close gaps in income. It is difficult to ascertain how effective implementation of the reforms have been and whether they are having the desired effect. But more changes are likely in the not too distant future.

YCW: You were the Director of the East Asia Program at the Lowy Institute in Sydney, Australia for five years. During your tenure you published frequently on China’s role in the world. What were your key observations on China during that time?

MV: My key observation about China is that it is not what we think it is. From the outside we ascribe a lot of motivations to China based on our own perceptions. We tend to use a lot of assumptions to fill gaps or explain what we see. For example, the assumption that economic liberalism will lead to political liberalism, or a growing middle class will eventually demand political change, or that the Chinese people are all restless under CCP power and secretly yearning for Western-style democracy. We find it hard to imagine the possibility of ways of being other than our own. We have for decades been dealing with China as we imagine it, not as it is. At the Lowy Institute, I tried to develop a body of work that was based around the analytical framework of “understanding Chinese foreign policy from the inside out” to try and provide some counter-balance—not to justify anything China was doing, I hasten to add, but so that we could develop effective responses and policies of our own.

YCW: In your recent Lowy Institute article “Temper Our Optimism: The Message from the G20 Leaders’ Summit in Osaka,” you examined whether the G20 is still relevant and whether it can deliver “strong, sustainable, balanced and inclusive growth” in the current geopolitical environment. Do you think the G20 has been an effective tool in bringing Xi Jinping and Donald Trump to the table to discuss contentious issues in their trade relationship?

MV: It was certainly convenient to have an event on third-party territory that both presidents would already be at, thereby not requiring either leader to visit the other. The G20 provided an opportunity for resuming the bilateral conversation after talks collapsed in May. The outcomes from the Osaka G20 meeting were not radically positive, but a “truce was convenient” is better than an escalation—further tariffs were not introduced, and negotiations are set to resume soon, with U.S. officials set to visit Beijing (Editor’s note: These remarks were true at the time of writing but have been superseded by recent events). Given this is more or less the same result as that of the meeting between Presidents Trump and Xi at the G20 in Buenos Aires last year, however, optimism should be tempered.

YCW: What materials would you recommend to our readers who are interested in learning more about Chinese foreign policy?

MV: There are a lot of great sources. I really believe that understanding China’s foreign policy requires an understanding of its domestic political, social, economic and cultural circumstances. It’s important to understand how history is politicised—see for example research done by Amy King at the Australian National University (ANU) or Louisa Lim’s book “The People’s Republic of Amnesia.” I also really like Elena Barabantseva’s work on (along with William Callahan, who also wrote the excellent book China, “The Pessoptimist Nation”). The ANU’s China Story Yearbook is a great read too, which in the last few years has involved Jane Golley as one of the editors.

I think it’s worth understanding how relationships of power are understood, what freedom means and what is considered “getting ahead” successfully—see Erika Evasdottir’s ethnography of Chinese archaeologists, That book completely changed the way I understood China. I also love Vanessa Fong’s “Paradise Redefined,” which examines how Chinese students abroad see themselves and the world. For straight up understanding of what China is doing in the world, Evelyn Goh is brilliant, her book “Rising China’s Influence in Developing Asia.” The research at China Matters headed by Linda Jakobson is well worth reading too.

For newsletters, I like Bill Bishop’s Sinocism newsletter, SupChina and the Ohio State University’s Modern Chinese Literature and Culture newsletter. For podcasts, try Louisa Lim and Graeme Smith’s Little Red Podcast, Sinica from SupChina, and China Power hosted by Bonnie Glaser from CSIS in the U.S.