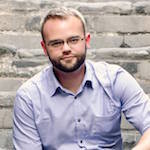 Tom Nunlist is a writer and analyst living in Shanghai. He formerly edited CKGSB Knowledge on behalf of the Cheung Kong Graduate School of Business, where his work formed the inspiration for his first book project, “China’s Evolving Consumers.” Tom now works as a risk analyst for Hill & Associates, where he focuses on politics and policy in China and the Greater China region.

Young China Watchers (YCW): How did you become interested in modern Chinese consumerism?

Tom Nunlist (TN): I became interested in the subject when I was working at my previous job as editor for a business and economics review magazine at a Business School in Beijing, CKGSB Knowledge. I kept running across articles effusively describing China’s rising “middle class” consumers, how many there are—50 million, 100 million, 300 million, depending on who you asked—and how much money can be made selling them lattes, handbags, and whatnot.

My initial fixation was: What do we mean when we say “China’s middle class”? Who is that exactly? It seemed the notion of “middle class” was very much taken for granted, and so I started researching to draw some clearer lines around this group. In my article, “The Middle Minority,” one of my findings was that Chinese people often aren’t too sure what “middle class” means either. They have different ideas about what makes a person “middle class,” and different notions of how consumerism fits into it.

When the article was done and dusted, I found I was not yet satisfied with my level of understanding. I wanted to go deeper, and that’s how I ended up putting together this book, which focuses much more closely on individuals.

YCW: Can you tell us a bit about why you chose to release this book at this moment in time, and how you selected the different contributors?

TN: Although leading global brands have been in China for a long time, there is a growing interest in China among smaller brands and marketers. But if you’re approaching this market for the first time, how do you understand it? There is much more behind Chinese consumers than just a digital wallet—how do you get to know them as human beings? Where do you start? While this book is a collection of detailed portraits, from the outset the goal was to deliver a piece that’s more than the sum of its parts. After you read about these eight types of people, you can start to develop a deeper sense of the forces driving China’s consumer society in the late 2010s. 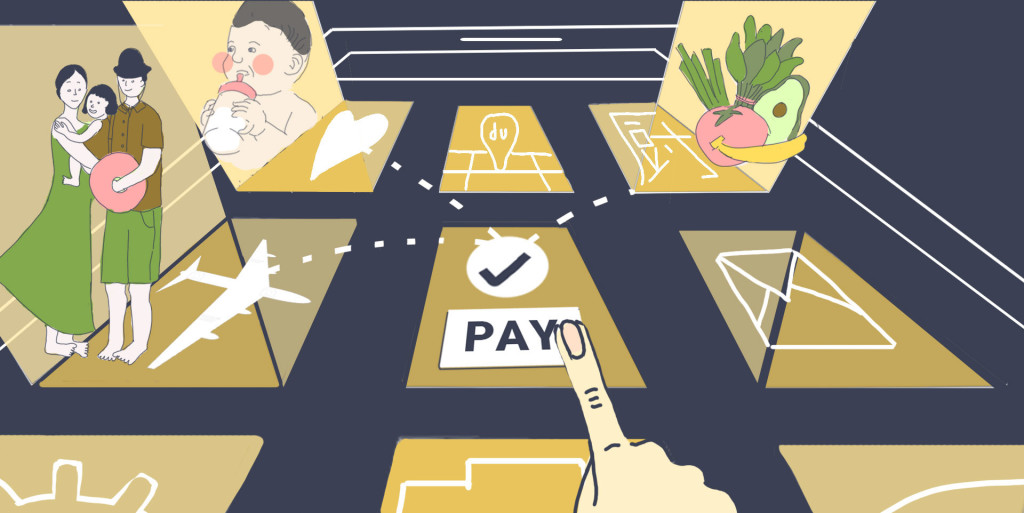 The “Urban Couple,” as illustrated by Joyce Siu

In addition to providing views on eight different types of people, I also wanted eight different perspectives on them. In terms of contributors, we chose a mix of professional market researchers and academics, including several anthropologists. In terms of perspective, we also have a mixture of foreigners and Chinese, which I think adds a lot of value to the book. With regard to the former, there is a certain “fresh eyes” dividend you get from looking at a subject as an outsider. For the Chinese authors, the insider perspective is impossible to duplicate. The author of the “Modern Chinese Mothers” chapter in particular stands out because she is herself a modern Chinese mother. Nobody else can provide the same level of insight.

YCW: Given the fast-changing commerce environment in China, how quickly do new archetypes of consumers arise and how easy is it to classify them? Are they following Western patterns or have you identified profiles unique to China?

TN: China is still changing quickly, but we have already entered a period where the pace has slowed down quite a bit. For example, the tuhao, or “new rich,” in the first chapter. There will never be another generation like that, because the period of rapid wealth generation in the reform era was so unique. The central point of that chapter is not how this group got rich fast and doesn’t necessarily know how to handle it—a well-worn story at this point—but how they are figuring it all out. Their life trajectories and the lives of some of their children, the fuerdai of the following chapter, will be much more stable and predictable in the future. I sense that there will be fewer new groups of people going forward because there simply is less economic upheaval.

In terms of how much people seem to follow Western patterns, this is a very interesting question. On the surface, many aspects of Chinese consumers’ lives might seem quite similar to their Western counterparts. In “China’s Generation Z,” which focuses on young kids and their families, the parenting ideals of young, educated professionals will seem very familiar to those in the West. But the challenges of the environment, from dealing with grandparents, schools, to just the overall level of competition, are very different.

YCW: Overall, in the context of foreign companies selling to consumers in China, how do you evaluate their general understanding of the Chinese consumer? Do they have the required insights?

TN: Some large brands understand the China market very well. Adidas, for example, understood not only that the sports market in China would experience massive growth, but why it would happen and how the brand could be competitive—its China revenues have more than tripled since 2010. At the same time many others have failed. P&G completely missed the move to “premiumization,” something they might have spotted if they had a better understanding of cultural trends. Home Depot’s failure in China was due to both cultural and economic misunderstandings about how people remodel their homes. There is a track record of also larger brands failing to adapt to nuances of consumer preferences in China.

For many smaller brands, the understanding might be zero. This is an important problem right now because huge multinationals are all here at this point, or at least have given it a go. There are opportunities opening up for smaller brands now that the paths to China are a bit more well-trodden, and because consumers have better ideas about what they want. There’s room for products that are more specific, more targeted. But on the flip side, the smaller brands that offer those products may have fewer resources to do the necessary research, on top of a lack of basic understanding of the Chinese market.

YCW: Might eight consumer profiles for 1.4 billion Chinese consumers be considered too simple? How did you arrive at that number?

TN: The diversity of China is so vast that you just cannot cover everyone in a project like this. The first thing we did was to slim down our research goal to urbanites living in Tier 1 and 2 cities. As mentioned above, it is difficult to get a handle on what “middle class” means, but we further selected people who would at least be able to afford Starbucks once a week. This means we did not include people living in Gansu, or the armies of delivery people that are everywhere in big cities. The biggest reason for this choice is that those people will be less relevant to foreign brands wanting to market in China, as they have less money to spend and are more difficult to reach.

Of course there is still enormous diversity in our selected goals, far beyond what we were able to capture in the book. One profile I really wish we could have done is diaosi, which would roughly translate to something like “dorks.” These are young men that are having trouble reaching the ideals of masculinity in China, for example owning a house. Another is “successful migrant,” or the guy who came to Shanghai 10 years ago to be a construction worker, but became a successful entrepreneur. These people are very important to the China story, but at the end of the day, you cannot cover everything.

YCW: What is the most fascinating consumer profile or trend for you?

TN: It is difficult to pick a favorite, but I really enjoyed “Modern Chinese Mothers.” I’m an American man, so to learn about life experiences so different to my own was eye-opening. It helped me crystallize how social forces create problems for people, and how consumption can be an important part of personal growth in non-shallow ways. One of the struggles of the portrayed woman was that she was suddenly thrust into a world of domestic responsibility that is much more influenced by traditional Chinese family values, when she had spent her adult life up that point in a modern office career. It was a shock. Like many women from the one-child generation, she didn’t have any domestic skills—in short she felt under pressure and a bit inadequate. 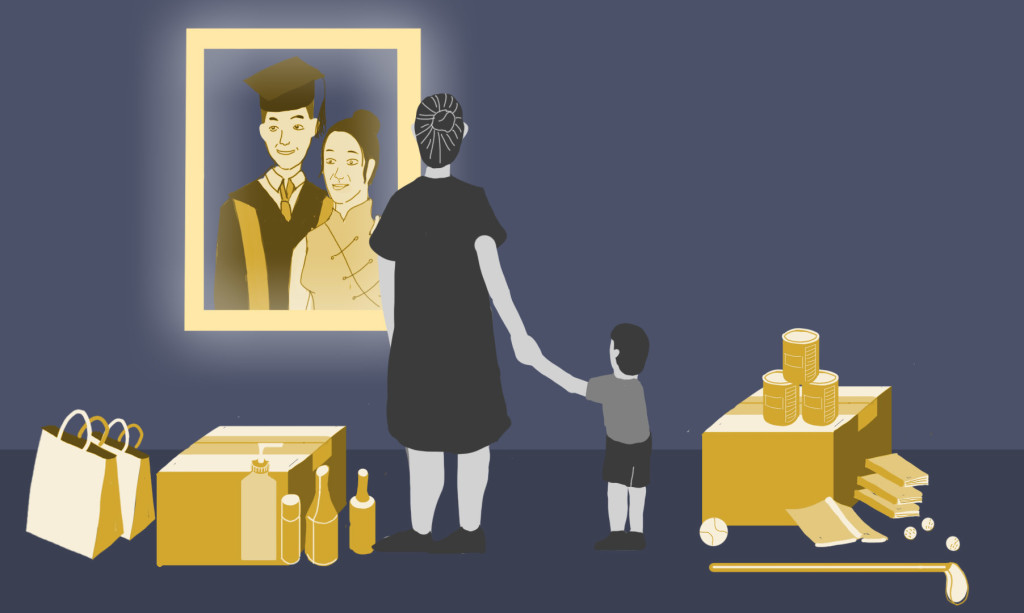 The “Modern Chinese Mother,” as illustrated by Joyce Siu

By the end however, she managed to reinvent herself, learned to cook and decked out her kitchen with all the modern appliances. You could see how there was one aspect of living up to expectations, and one of reclaiming control over her life.

YCW: What is your advice for understanding Chinese consumerism better after reading your book, and doing research on contemporary trends in China in general?

TN: Come to China. Even if it’s just for a short trip, come here and see how it feels. There is only so much you can get from reading this book, or any book like it. I urge readers to visit Shanghai and see The Bund, and then find somebody to take you to the suburbs and to the less fortunate parts of town. At the most fundamental level, this is a book about understanding Chinese people—there’s no better way to do that than getting to know a few of them yourself.