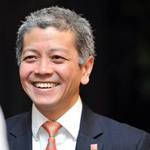 Danny Quah is Professor of Economics and International Development at the London School of Economics and Political Science, and Director of the Saw Swee Hock Southeast Asia Centre at LSE’s Institute of Global Affairs. He had previously served as LSE’s Head of Department for Economics, and Council Member on Malaysia’s National Economic Advisory Council.

Quah is Tan Chin Tuan Visiting Professor at the National University of Singapore, and lectures regularly at Peking University. He studied at Princeton, Minnesota, and Harvard, and was Assistant Professor in the Economics Department at MIT before joining LSE.

Quah gave the third LSE-NUS lecture in 2013, TEDx talks in 2014 and 2012, and the Inaugural LSE Big Questions Lecture in 2011. His current research is on an economic approach to world order – global power shift and the rise of the east.

The year 2015 saw yet another round of doom and gloom pronouncements on China’s economic and political viability. To date, it has been a straight run of over 30 years of prediction failure by some of the otherwise most insightful of Western observers. Any year now, almost surely, the doomsayers will be right, if only partially. What form will that turn-around take, and what forces will drive it? Why does there continue to be such unease over what has been the greatest poverty reduction success in human history?

London – ‘China and the World Economy – What Now After Another Round of Doom?’ with Danny Quah, Professor of Economics and International Development & Director of the Southeast Asia Centre, LSE