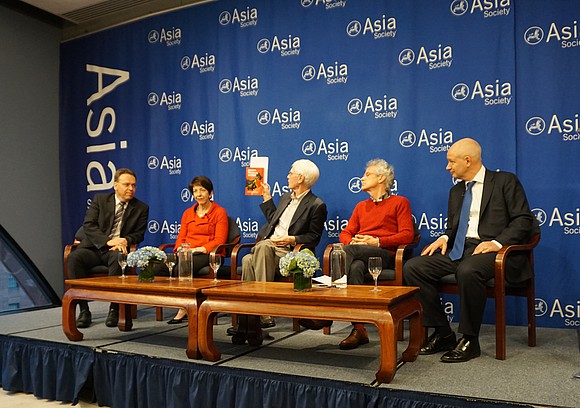 As U.S. President Donald Trump threatens both China and the EU with a trade war and as the EU struggles with its centrifugal tendencies in the aftermath of Brexit, transatlantic policy coordination has become a difficult proposition, especially when it comes to dealing with a rapidly changing China. “What does China’s rise mean for the United States and Europe?” was the title of a panel discussion, which was co-hosted by ChinaFile, the Asia Society, MERICS and YCW on 20 March in New York.

Orville Shell, Arthur Ross Director of the Center on U.S.-China Relations at the Asia Society, wondered whether the U.S. and Europe were currently in a position to define shared goals in dealing with China’s growing geopolitical and economic clout. Identifying areas of transatlantic cooperation and coordination is not an easy task in the Trump era. MERICS President Sebastian Heilmann described how German foreign policy makers and the business community are currently preparing for a shock wave of aggressive U.S. policies, especially on trade.

In the meantime, Chinese officials are making the rounds in Brussels and elsewhere to present China as a reliable partner. According to Heilmann, Chinese President Xi Jinping’s defense of the global trading order at this year’s World Economic Forum in Davos was well received by the international business community. Heilmann put it bluntly: Trump’s motto “America First” won’t fly at the G20 Summit in Hamburg in July, the more likely outcome would be “America Alone.”

Can China fill the Trump vacuum?

Peter Wilson, the UK’s ambassador to the UN, assured the audience that Brexit would not mean an end of close consultations with the country’s allies. “We are still a European country,” he said, “and we want to continue to talk about China with our European partners.”

Ambassador Wilson cautioned that it was unclear to what extent China would be willing to fill the vacuum created by the Trump administration. He did however stress China’s strong commitment to the international system, referring to China’s growing involvement in UN peacekeeping missions and its high financial contributions to the UN budget.

Susan Shirk, the Chair of the 21st Century China Center at U.C. San Diego, pointed out that it would not necessarily be a bad thing if China further stepped up its global engagement in the Trump era. If Trump really sparked a trade war or damaged international organizations, it would be good to have China take the lead. “If China leads the open trading system, it should be welcomed,” Shirk said.

La Repubblica’s U.S. bureau chief Federico Rampini, who formerly headed the paper’s Beijing bureau, disagreed with Heilmann’s scenario of Trump being sidelined at the upcoming G20 Summit. He acknowledged the widespread European fear that Trump will weaken the transatlantic relationship, but he doubted that China could serve as an alternative. Just like in the U.S., many in the European public remain wary of China, which they blame for job losses in the wake of globalization.

“We already have a new world order”

At the same time, all panelists acknowledged that international cooperation with China has become indispensable on a range of issues. Wilson pointed to China’s responsible behavior in comparison to another permanent member of the UN Security Council. According to him, Russia, not China, is destabilizing the world. It would therefore be the wrong approach to push China into a closer cooperation with Russia. “We have issues to work on with China such as North Korea.”

“We already have a new world order,” Heilmann argued. And in this new world order, no one can avoid dealing with the economic giant China. Especially since China has started to translate its economic success into foreign policy ambitions. In this context, Rampini stressed the contrast between Trump’s infrastructure plan and China’s “One Belt, One Road” initiative: the U.S. plan focuses solely on the domestic economy, but the Chinese plan is directed outward and will have direct geoeconomic and geopolitical consequences.

China’s heightened international confidence triggers fears of a new hegemon preparing to challenge the existing security order. Some observers see signs of such a challenge in China’s assertive behavior in the territorial disputes with its neighbors in the South China Sea. Shirk tried to calm such fears and expressed her confidence that a natural counter-alliance would form in Asia should China get too strong. The question then would be whether that alliance could fight back successfully without the help of the U.S.

How will China change us?

Rampini focused on the systemic challenge China’s domestic political system presented to liberal democracies. Assumptions about China’s future development were often proven wrong, he said. Contrary to common expectations, capitalism did not lead to democracy in China, and the internet did not usher in an age of pluralism. On the contrary, as Heilmann pointed out, China is building a system of “Digital Leninism” with the help IT and big data, and it is peddling these new surveillance technologies to other authoritarian states.

This piece was originally posted on the MERICS blog.