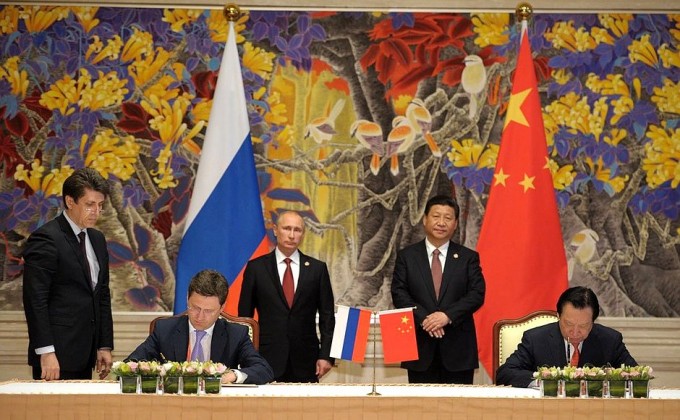 Russia’s Vladimir Putin and China’s Xi Jinping look on as gas agreements are signed in May 2014. Photo credit: Kremlin.ru.

Onlookers to the “Russian-Chinese alliance” point to oft-cited pretexts for common ground: economic complementarity, geographic proximity, and ideological favorability. In a recent talk co-hosted by Young China Watchers, Carnegie Moscow Center’s senior associate Alexander Gabuev laid these out in detail alongside Carnegie-Tsinghua Center’s nonresident scholar Wang Tao. For Gabuev, the alliance is a boon on the surface: Russia is brimming with natural resources but short on the internal demand and capital to exploit them. On the other side of the Siberian border, China poses as both a financier and market destination. At a global level, the two countries find themselves on the same side of international norm disruption. In the context of Internet sovereignty, censorship, cybersecurity, and responsibility to protect (R2P), Russian political attitudes mesh well with China’s intentions. However, skepticism of their partnership is warranted not only on energy cooperation, but also on a strategic level.

At the close of Q1 2016, Russia’s economy continues to be cause for concern. Economist Sergei Guriev notes the urgency of creating a viable lifeline as the Kremlin faces persistently low oil prices, unyielding sanctions, and a rising deficit. Russia’s budget, which has struggled to adjust to the global oil glut and fallout with the West, is now being squeezed to the point where some state-owned companies are starting to sell off shares. In spite of purported budget cuts and provisions for a stimulus package, the economy is in a two-year recession. At this rate, the government’s foreign currency reserves may not last through next year.

Due to reductions in U.S. production and Middle Eastern supply, the International Energy Agency signaled in March that oil prices may have reached their floor, which would extend a brief relief to Moscow’s budget. However, the Russian economy is not likely to be buoyed by Chinese consumption. As Wang Tao noted, Russia only accounts for about 10 percent of Chinese oil imports. The high-profile oil and gas agreements signed in 2013 and 2014 produced plenty of lip service but very few results. Little-to-no progress has been made on the Power of Siberia pipeline, while liquefied natural gas (LNG) on the Yamal Peninsula is at a similar standstill. Nonetheless, Russia recently announced a 30 percent Asian market penetration target for its gas by 2035, ambitiously employing what Russian energy analyst Tatiana Mitrova deems a “counter-balancing” strategy against estranged European customers. China should approach its energy-rich neighbor with discretion.

The reality of the slowdown

At the recent conclusion of China’s lianghui, Premier Li Keqiang reassured the world of the improbability of a Chinese hard landing, acknowledging that China has officially entered a period of slow growth. China’s need for Russia’s natural resource endowments was especially relevant during its period of rapid growth, when energy-intensive manufacturing spurred demand for raw materials. The energy implications of the current economic environment, however, alter the playing field of China’s relations with Russia. The 13th Five-Year Plan reiterates the position outlined in the National Development and Reform Commission’s (NDRC) National Energy Development Plan to 2020: decreasing coal consumption while boosting less polluting forms of energy. Non-fossil fuel energy is slated to comprise 15 percent of primary energy demand by 2020. With overcapacity in steel, cement, and other processing materials, the Chinese leadership is making moves to bring consumption in the service sector to the forefront of its growth engine. The ambitious energy transition is bolstered by the country’s national and international commitments to peak carbon emissions within the decade. While coal continues to dominate both primary energy demand and electricity production, the potential for natural gas and renewable energy is unrivaled.

In real terms, natural gas has been at something of a stalemate. Demand for natural gas grew modestly in 2015 after the NDRC downgraded its consumption target in the previous year. While this can be attributed to the overall economic slowdown, insufficient infrastructure and distortionary pricing mechanisms also limit consumption. Especially troublesome are the long-term LNG contracts China locked in at rates preceding the oil crash in 2014. The NDRC has combatted the sector’s slack performance by introducing pricing reform, cutting domestic gas prices in an attempt to reflect the downturn in global gas prices worldwide. Even with these measures, the country faces an oversupply in natural gas, and total overhaul of the industry is needed to realize its full potential.

This should be a sobering message to Gazprom, even more so in light of the falling “Asian premium” for LNG. While the lion’s share of natural gas is consumed by the industrial sector, the sector experiencing the highest growth in demand is residential. This is linked to China’s urbanization drive, aimed primarily eastward at cities in the Pearl and Yangtze River Delta regions. Pipeline gas is cheaper, and though the disagreements over the routing of Russian gas to China appear to have been resolved, the financing of the Power of Siberia is unclear. Even less clear is how Gazprom intends to extract gas from the fields in Eastern Siberia under the current sanctions regime. In addition, the Central Asian gas pipeline trunks from Turkmenistan and Kazakhstan fulfill demand at a cheaper price than Gazprom’s, and more importantly, are already delivering. 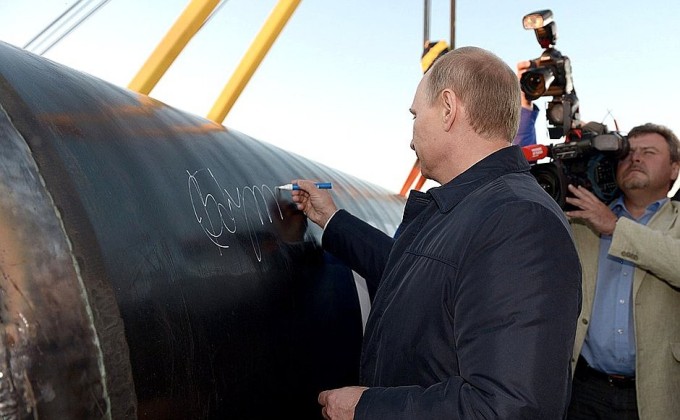 Vladimir Putin signs the first section of the Power of Siberia pipeline at a September 2014 ceremony attended by Chinese Vice-Premier of the State Council Zhang Gaoli. Photo credit: Kremlin.ru.

Central Asia poses a site of potential cooperation for optimists, with China’s “One Belt, One Road” (OBOR) initiative officially endorsed by the Kremlin after initial misgivings. But this should not be mistaken for deep reliance or trust on behalf of China, which demonstrates a delicate diplomatic awareness of indulging Putin’s vision of great-power status. Crucial to securing Kremlin support is the reassurance that Russia is considered a critical partner to the modern Silk Road initiative, even as China’s oil and gas investments in Central Asia essentially deleverage Russia’s position on its own contracts with the former Soviet states.

The region itself is not without risks—while relatively stable in the last decade, a history of ethnic clashes, riots, and civil war are emblematic of an uncertain future and mutual distrust. As recently as 18 March the Kyrgyz Republic lodged a formal protest against the stationing of Uzbek forces on its border. OBOR clearly poses risks by increased involvement in the absence of a comprehensive objective, and aligning with Russia may not provide the most stable outcome.

Certainly the speedy interjection and subsequent extrication in the Syrian crisis reassured no global partners. The intervention was widely understood to be directed at Putin’s domestic audience just as much as the international community, but this strategy’s efficacy may be waning. A Levada poll placed Putin’s approval rating at 10 percent less than last year. The leader may be forced to take increasingly drastic measures to ensure support of his administration, which by and large provides little benefits to its constituents. Slashing military spending and pension allowances to achieve the needed budgetary cuts jeopardizes political support.

A shaky but strategic partnership

It has been two years since Putin’s annexation of Crimea. What was once deemed a humanitarian intervention to protect Russian-speaking citizens abroad has now been openly declared a response to North Atlantic Treaty Organization (NATO) aggression. Overtures about renewed camaraderie following the deals inked with China in 2013 and 2014 have been supplemented with affirmations of commitments to European gas markets. The erratic movements and self-interested calculations of Putin’s Russia only reinforce his lack of strategic vision and allegiance. If a move appears advantageous one moment and irresponsible the next, little appears to get in the way of endlessly shifting priorities. Increased erratic behavior could jeopardize a partnership with China.

Especially in the context of China’s shifting economic growth model, Russian natural gas has the potential to play a key role in reducing carbon emissions in the short term and relieving electricity production from its reliance on coal. In recent years, however, fruitful outcomes have been thwarted due to Russia’s lack of firm commitment to the partnership. Now that gas markets are oversupplied, the ruble is one of the worst-performing currencies two years running, Moscow’s budgets are squeezed, and true allies are few in number. For China, such a partner on a global stage is risky and unflattering.

Raya Yampolsky is a dual degree Master’s candidate in International Energy and International Relations at Sciences Po and Peking University.