On October 17th, YCW San Francisco hosted an invigorating round table discussion led by Professor Syaru Shirley Lin of the Chinese University of Hong Kong and Professor Harry Harding of the University of Virginia on the challenges facing China, the U.S., and Taiwan in managing their complex triangular relationship, especially given the emergence of a distinctive/consolidated Taiwanese national identity over the past two decades. 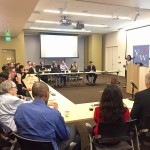 Syaru Shirley Lin
Professor Syaru Shirley Lin is a member of the founding faculty of the master’s program in global political economy at the Chinese University of Hong Kong and also teaches political science at the University of Virginia. Her book, Taiwan’s China Dilemma, was published by Stanford University Press in 2016. She graduated cum laude from Harvard College and earned her masters and Ph.D. from the University of Hong Kong. She retired as a partner at Goldman Sachs, where she led the Principal Investment Area for Asia ex-Japan and spearheaded the firm’s investments in many technology start-ups. Professor Lin’s present board service includes Goldman Sachs Asia Bank, Langham Hospitality Investments, and Mercuries Life Insurance and is a member of the Hong Kong Committee for Pacific Economic Cooperation.

Harry Harding
The founding dean of the Frank Batten School of Leadership and Public Policy, Professor Harry Harding is presently a University Professor at UVA and also Visiting Professor of Social Science at the Hong Kong University of Science and Technology, where he is helping develop a new Institute on Public Policy. He is a specialist on Asia and U.S.-Asian relations, whose major publications include “Organizing China: The Problem of Bureaucracy, 1949-1966”; “China’s Second Revolution: Reform after Mao”; “A Fragile Relationship: the United States and China since 1972”; and the chapter on the Cultural Revolution in the Cambridge History of China.