On September 5, 2018, YCW San Francisco hosted John Pomfret and Peter Schwartz for a dynamic conversation on both the history and future of US-China relations entitled “Understanding China through the History of US-China Relations since 1776.”

John Pomfret is a journalist and author who is considered one of America’s leading writers on US-China relations. His most recent book The Beautiful Country and the Middle Kingdom: America and China, 1776 to the Present (Holt, 2016) is an authoritative analysis of the US-China relationship that stretches back to the founding of the American republic. Mr. Pomfret was joined by Peter Schwartz, a noted futurist and strategist who serves as Senior Vice President of Strategic Planning at Salesforce.

The event was sponsored by Asiapacforce at Salesforce. 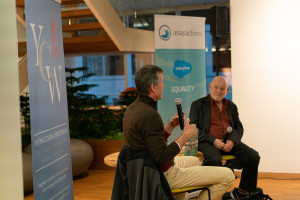