YCW will be hosting a panel discussion with Director Miao Wang after the San Francisco showing of Maineland, a critically acclaimed movie depicting the story of two mainland Chinese students attending a Maine boarding school.

The film showing will be at 7:00pm, October 2, Opera Plaza Cinema (601 Van Ness Avenue). The panel will immediately follow the movie at approximately 8:30pm.

A panel discussion featuring Director Miao Wang will follow the screening, with fellow panelists Ruby Ming, 1900 Institute, and Karin Fischer, The Chronicle of Higher Education. The discussion will be moderated by Fred Tsai, Head of YCW of San Francisco. 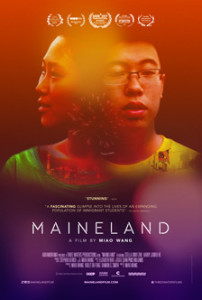 Over 370,000 students from Mainland China are enrolled in American high schools and universities – six times more than a decade ago – with $11.4 billion contributed to the American economy. Visually striking and thematically complex, MAINELAND captures the coming-of-age transformations of two affluent Chinese teenagers with big American dreams as they settle into a boarding school in small-town Maine, sharing poignant discourses on alienation, personal identity, and cross-cultural dialogue.

Maineland has received wide critical acclaim. The film won the Special Jury Prize at SXSW and the Independent Film Festival of Boston, is a NYTimes Critic’s Pick and was reviewed in the New Yorker. The film has been featured on NPR’s Here and Now, PRI The World, Fast Company, and the Boston Globe.

Miao Wang (Director / Producer / Co-Editor) is an award-winning filmmaker who focuses on creative and cinematic documentaries that inspire cultural understanding and a humanist perspective of the world. Her critically-acclaimed documentary films Beijing Taxi (feature-length) and Yellow Ox Mountain have screened at over 70 international festivals and institutions such as SXSW and the Guggenheim Museum, with U.S. theatrical release, and broadcast nation-wide. Beijing Taxi is digitally distributed by Sundance Artist Services. She directed Made by China in America, a documentary short in Morgan Spurlock’s acclaimed We the Economy series. Wang is a recipient of grants and fellowships from the Sundance Institute, the Jerome Foundation, New York State Council on the Arts, the Tribeca Film Institute, Tribeca All Access, IFP Filmmaker’s Lab, Independent Film Week, Women Make Movies, and the Flaherty Film Seminar. Maineland is her second feature-length documentary, winning Special Jury Awards at SXSW and the Independent Film Festival of Boston.