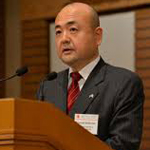 Dr. Kazuyuki Katayama is the Consul-General of Japan in Shanghai (August 2015-). He obtained Bachelor of Law from Kyoto University, Master of Arts from Harvard University and PhD from University of Malaya. He also studied in the Chinese University of HK, Beijing Language Institute, Peking University and Stanford University. As a career diplomat, he served in Hong Kong, Beijing, Washington DC, Kuala Lumpur and Brussels. He was Consul-General in Detroit before coming to Shanghai. Within the Ministry of Foreign Affairs, he was at the China Desk twice, and served as Director of Energy Resources Division and as Director of Cultural Affairs.

Dr. Katayama reviews the 43 year relationship between Japan and China since their normalization which took place in 1972. In his lecture, Consul-General Katayama will propose how to manage their relationship so that both countries can create a win-win rapport as eternal neighbors.

Relations between China and Japan have been fraught with tensions that have waxed and waned since economic opening, even as economic ties and tourism have grown between the two neighbors. China’s increasing international and economic clout has started to shift the balance of power in Asia-Pacific, and the future of this development is still uncertain. Consul General of Japan to Shanghai, Dr Kazuyuki Katayama discussed the changing nature of Sino-Japan relations, given the shifting dynamics between China and its neighbors. He discussed the obstacles as well as the bridges that bring these two countries tied by history and geography closer together or further apart.