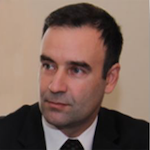 Dr. Alessandro Arduino is the co-director of the Security & Crisis Management program at the Shanghai Academy of Social Science (SASS-UNITO) and external associate at YCW Partner Lau China Institute, King’s College London. Arduino’s two decades of experience in China encompasses security analysis and crisis management. His main research interests include China’s political economy, Sino-Central Asia relations, sovereign wealth funds, private military/security companies, China’s security and foreign policy. He is the author of several books and has published papers and commentaries in various journals in Italian, English and Chinese languages. He has been appointed Knight of the Order of the Italian Star by the President of the Italian Republic. His most recent book is “China’s Private Army: Protecting the New Silk Road” (Palgrave, 2018).

Young China Watchers (YCW): How did you become interested in the role of private security companies (PSCs) in China’s Belt and Road Initiative (BRI)?

Dr Alessandro Arduino (AA): I have been interested in the broad range of risks and threats that Chinese companies may face as a consequence of their foreign investments. Since 2013 my research has been focused on the socioeconomic impact of the BRI on local communities, particularly in Central Asia. I was aware that international energy companies tend to employ international private security firms in order to protect their personnel and infrastructure. So I asked myself ,“Is China going to employ Blackwater-style PSCs or will China develop PSCs with ‘Chinese characteristics’?”

“China’s Private Army: Protecting the New Silk Road” (Palgrave, 2018) presents the evolution of  Chinese PSCs from local security companies operating at the municipal level in China to international companies that are able to operate abroad in high-risk areas. This process is evolving and the Chinese market for force—both demand and supply—along the BRI is quite different from the one that we were used to seeing during the Iraq and Afghanistan conflicts.

YCW: Where are the hotspots in the BRI countries for security contracting? Do you expect those locations to change in the next year?

AA: Confrontations between the local population and Chinese workers are not new in Africa or in Central and South Asia as disputes over working conditions and environmental degradation issues resulting from China’s foreign direct investment (FDI) are a growing concern. One oversight that must be addressed is that the BRI requires a wide range of security considerations along both maritime and land routes. Afghanistan, Pakistan, Mali and Sudan are dangerous hotspots, but local problems in different areas could ignite greater risks.

During the economic and security impact analysis of a BRI project, there is a dangerous lack of attention given to local communities—yet it is essential to monitor the ongoing effects of the influx of Chinese money and workers on those communities. In the near future, areas such as the Ogaden basin in Ethiopia could pose severe threats to Chinese FDI if the concerns of indigenous tribes and other local groups are not taken seriously. Also, during the last few decades kidnapping for ransom from Africa to South America has become a lucrative business, targeting foreign CEOs and specialized foreign workers. The risk to Chinese personnel operating abroad is increasing exponentially, but the companies involved in the BRI have not yet taken these threats seriously.

YCW: Why do Chinese state-owned enterprises (SOEs) engaged in BRI projects often underestimate the political risks they will face abroad?

AA: Overall, SOEs operating in the energy sector have already achieved a high level of professionalism in dealing with crisis prevention and mitigation. Chinese enterprises acknowledge that the risks associated with FDI in emerging economies include a high failure rate due to intertwined factors ranging from economic crises to civil unrest. At the same time, due to their public nature, the Chinese SOEs have the tendency to blur the lines between commercial and political interests. Consequently, they tend to rely too optimistically on Beijing’s support in the event of a crisis. Terrorism, separatism, and insurgency are primary variables in the risk assessment equation, but their value is often overestimated by the central government and the SOEs. Without adequate precautions the Chinese FDIs could disrupt the local dynamics of power and wealth, which creates a new breed of winners and losers that may provoke anti-Chinese sentiment.

One problem is also related to the SOEs’ lack of willingness to invest in the research and analysis required to understand and prepare for the high-cost risks associated with some overseas projects. The lack of proper filters in the security bidding system, which is currently solely based on pricing requirements and informal contacts, is constraining the professional development of the market for force.

YCW:  In your book you’ve argued that Beijing prefers to use PSCs over the People’s Liberation Army (PLA) or People’s Armed Police (PAP) to resolve BRI-related disputes in other countries. Why is that?

AA: In my view, there are different rules of engagement depending on the region or nature of the threat. With reference to the evacuation of Chinese nationals in war zones, which occurred in Libya in 2011 and more recently in Yemen, the PLA Navy (PLAN) has already showcased a high level of professionalism and capabilities when operating far from the Chinese coast.

In contrast, when a small crisis erupts and there are few individuals involved or the local government does not request the intervention of PLA and PAP, it is more cost-effective, efficient, and timely to deploy professional PSCs. In this respect, by purging corrupt officials from the PLA, President Xi Jinping has accomplished a long-standing reform to detach the PLA from the entrepreneurial side of China’s economic development. Chinese PSCs are involved in the privatization of some aspects of the state’s monopoly of violence, while the army has a clear role separate from the commercial side.

YCW: There has been considerable criticism that BRI projects only use ethnic Chinese workers. Do Chinese SOEs generally prefer to hire ethnic Chinese PSCs, and do you think that as Chinese SOEs gain more international experience and become more confident, they will be open to hiring non-Chinese PSCs or might they internalize the security function?

AA: Up until now, the situation is quite the opposite. Chinese PSCs are aware of their lack of international exposure, and thus tend to hire international and local contractors or even partner with well-established international PSCs. In my view, after the Chinese PSCs feel more confident in their capabilities, they will try to operate alone outside China.

At the same time, some Chinese SOEs are interested in employing Chinese PSCs for several reasons. Price, language, cultural affinity, and informal networks are some of the factors. In addition, and most important, is the perception that Chinese SOEs are able to preserve the secrecy of the SOEs’ data and business strategies. In this respect, Russian PSCs that are starting to look at the Chinese market for force are advertising that their services: a) are more competitive on the costs side; b) offer language capabilities in several areas of the BRI, such as areas of Central Asia where the Russian language is the preferred medium; and c) can screen the SOEs’ need for secrecy from the Western counterparts.

YCW: The non-interference principle has been one of the pillars of China’s foreign policy. Is this at odds with PLA and PLAN reforms that protect China’s interests abroad? How will this principle combine with peacekeeping efforts and PSC programmes to form a cohesive policy of Chinese security performance abroad?

In practical terms, the employment of Chinese PSCs could affect the Chinese non-interference principle in both positive and negative ways. China’s “Blue Helmet” presence is increasing both in size and professionalism, and there is a dire need for regulations and code of conducts in how PSCs, peacekeeping, and local security forces need to interact. In this respect, the evolution of China’s peacekeeping efforts and PSCs is narrowing the gap between Chinese economic diplomacy and security capabilities. A mature Chinese PSC, understanding the security environment complexity, will be able to detect and counter threats posed by non-state armed actors, as well as avoid and manage crises generated by negative spillovers from SOE investment. Therefore, it is imperative to involve China, at an early stage, in an international effort to promote transparency and accountability.