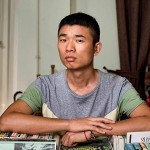 Fan Popo is an independent filmmaker and LGBT activist based in Beijing. He studied screenwriting at the Beijing Film Academy. After his graduation in 2007 he became a leading figure of China’s queer cinema scene. His documentaries on LGBT and gender issues have been screened at film festivals around the world. Fan Popo is also the author of Happy Together: A Complete Record of a Hundred Queer Films and a board member of the Beijing Queer Film Festival.

Fan Popo spoke at a Young China Watchers event at MERICS in Berlin in February 2017. This interview was conducted in cooperation with MERICS, a YCW Partner.

MERICS/YCW: What is the status of lesbian, gay, bisexual, and transgender (LGBT) rights in China?

Fan Popo (FPP): The government decriminalized homosexuality by abolishing the so-called “Hooligan Law” in 1997. In 2001, the Chinese Psychiatric Association removed homosexuality from its list of mental disorders. However, homosexuality is still considered a possible cause of mental illness if people feel that their sexual orientation is a disorder. There are therapists who are making good money offering treatments claiming to “cure” gays and convert gay men and women into heterosexuals.

LGBT people in China still face many legal challenges. For example LGBT groups are not allowed to register as NGOs. Some of these groups are registered as companies; others are not registered at all. In addition, the new charity law makes funding from abroad more difficult.

FPP: Let’s take the case of Jin Xing. Jin Xing is a transgender woman and former dancer in the People’s Liberation Army dance troupe who became a TV host and celebrity in China. She is one of several transgender people who succeeded in the entertainment industry. But we must not overlook the problems that transgender people in China face, such as employment discrimination, poverty and homelessness. Transgender people who are not as successful and attractive as Jin Xing and her peers do not only suffer defamation from mainstream society but also from within the LGBT groups.

MERICS/YCW: What about the depiction of homosexuality in mainstream media?

FPP: Most mainstream media are quite stereotypical on gender issues. Gay and lesbian films are banned in theatres and queer topics are not allowed to be the main theme in movies or TV series. If you shoot a gay movie, it will definitely not pass censorship authorities.

Social media make things easier. There is also censorship, but you can always repost content if it is taken down. That is why I post my movies online or show them in smaller screenings. Lately, the space on the Internet has also gotten narrower, though.

As for news and documentaries, there are journalists who are supportive of the LGBT community and report on LGBT topics. Chai Jing, a former CCTV anchor and investigative reporter, did a show on homosexuality a couple of years ago. It was supposed to be broadcast several times but the program was dropped after the first broadcast. Hunan TV also did a program on homosexuality in 2001, which was shut down as well.

MERICS/YCW: You’ve been particularly successful with your film “Mama Rainbow” (2011) portraying Chinese mothers who have learned to accept and support their lesbian or gay children. In 2016 you made a follow-up portraying six fathers and their relationships with their LGBT children. For LGBT people in China coming out to their parents is a big challenge. How has the situation evolved during the last couple of years?

FPP: I have seen a lot of progress over the last years. Organizations such as Parents, Families & Friends of Lesbians and Gays (PFLAG) are playing an important role in bringing together families of gays and lesbians from across China and raising societal acceptance. They are raising money through crowdfunding and have a big network now. When they were founded back in 2008, only two parents were involved. Today, they have more than 2,000 members.

Social media is playing an important role, too. What we’re seeing now is parents in rural areas using social media to reach out to communities outside their own. When I was filming in a small city in northwest China, a mother told us she felt bad when her daughter came out because she didn’t know any other families dealing with these issues. She then got in touch with other gay families from other parts of China via PFLAG.

MERICS/YCW: There are numerous platforms catering to LGBT in China and some talk about the rise of a so-called “pink economy” in China. Do you think that the image of LGBT will change when more entrepreneurs see them as an attractive target group for marketing and investment?

FPP: The “pink dollar” is a big topic in China in spite of censorship. Some people see a big hope for LGBT inclusion in Chinese society in the growing market for LGBT apps, such as Blued that attract millions of dollars in investment. It is a very positive development, but we need to be aware that there are a lot of people excluded from it: LGBT people with disabilities, migrant workers ,and poor people who cannot afford smartphones.

MERICS/YCW: Are attitudes towards LGBT changing? What will the situation be like, five, ten years from now?

FPP: There is reason for hope as the LGBT community is becoming more visible and better organized. But there are differences within the community. It is a lot harder to be lesbian than gay in China. Being a woman in Chinese society is already quite tough, and if you’re a woman and homosexual, then you have a “double burden.” Transgender people are less visible than the other groups, but the movement has become stronger. There are organizations that offer counseling on hormone therapy, career advice, or legal advocacy. Overall, I can say that mainstream society is becoming more accepting of the LGBT community. But I cannot say the same thing of the government.