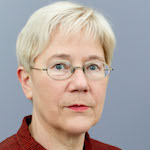 Dr. Gudrun Wacker is a Senior Fellow in the Asia Division at the German Institute for International and Security Affairs (SWP) in Berlin. Her research focuses on Chinese foreign and security policy, especially EU-China relations, and security cooperation in the Asia-Pacific. She is in charge of the annual “Berlin Conference on Asian Security” (BCAS) and co-organizes an annual EU-China Track II dialogue on cross-strait relations with the Shanghai Institutes for International Relations. She is currently a member of the Steering Committee of the Council for Security Cooperation in the Asia-Pacific (CSCAP) EU.

Young China Watchers (YCW): You started working on China issues many decades ago. How did you initially become interested in China at a time when Europe was still very preoccupied with the Cold War?

Gudrun Wacker (GW): I came into contact with China more or less by accident. When I was 16, I became very interested in Eastern philosophy, but mainly Japanese thinking. When I first started my studies at the Free University in Berlin in the 1970s, I was overwhelmed by courses in German literature because each had over 150 students. Somebody told me to try Sinology – “far fewer people there.” I did and I got stuck there. I was fascinated with the Chinese language. My parents were not very happy because they had hoped that I would become a school teacher and have a safe and normal life.

GW: Unlike in Europe, the United States established a system of bilateral alliances after World War II in East Asia, which to this day provides the backbone of hard security. Most countries in Southeast Asia were still colonies of Western powers at the time.

But I think the main reason for the absence of an overarching security structure like NATO in Asia is the enormous diversity we find between countries in the region in terms of their state of development, political systems, history, and religion. Countries or governments in Asia do not necessarily share a common threat perception. It’s true that the existing organizations and formats could be stronger: they overlap, are consensus-based and only weakly institutionalized, and have not solved any of the conflicts in the region. However, one can still argue that they have so far prevented rivalries and disputes from spiraling out of control. There is an unbelievable number of meetings taking place, bilaterally as well as multilaterally in varying constellations, with the latter providing opportunities to talk and exchange views even when various bilateral political relationships are tense.

There simply seems to be no appetite among political leaders for a more institutionalized security cooperation, at least not in the area of hard security.

YCW: On July 12, the arbitration tribunal in the South China Sea dispute between the Philippines and China released its verdict. Since the verdict, there has been much discussion but no decisive action. What do you expect to change with the decision? How does the ruling affect future conflict management in the South China Sea?

GW: First of all, I think that everybody, including the Philippines, was surprised about the tribunal’s final award. No one had expected it to rule in favor of Manila on basically every single issue. Notwithstanding the legally binding character of the ruling (which China has been denying from the start), there is no institution to enforce it. And since the award is not a decision on the question which country has sovereignty over which land feature in the South China Sea, it is also not clear what “enforcement” would entail. The ruling will therefore not bring a solution for the existing conflicts and competing territorial claims.

The clarity of the tribunal’s award makes it difficult to find a way forward that is both face-saving for the governments involved and domestically acceptable. It is now important that all sides – first and foremost China and the Philippines, but also the U.S. – do not act rashly and try to keep domestic reactions in check. Better conflict management can only be achieved if the present zero-sum logic is overcome. One way in this direction would be to start talking about how to jointly regulate fishery in the region. Some examples of successful cooperation in this area already exist, for example between China and Vietnam.

YCW: You are a member of the Steering Committee of the Council for Security Cooperation in the Asia-Pacific (CSCAP) EU and frequently write and comment on the role of Europe in Asian security. How can the EU usefully engage in Asian security?

GW: The EU is already engaged in Asian security in many ways. Some member states of the EU have a serious impact on the security situation by selling arms to countries in the region, unfortunately without any coordination or strategic considerations. The EU is a dialogue partner of ASEAN and a full member of the ASEAN Regional Forum. In recent years, Brussels has stepped up its activities in Asia, for example by holding training seminars on preventive diplomacy or on migration and border management. More could certainly be contributed in terms of capacity building, especially in the area of non-traditional security challenges. But most importantly, the EU and its member states have to build long-term relations with regional countries beyond economic issues and demonstrate their sustained interest. However, in light of the multiple internal and regional crises the EU is currently facing, it will not be easy to have more and regular high-level visits and devote the necessary level of attention to the region. It is not helpful to make big announcements and then fail to follow up on them.

YCW: Germany’s economic strength, political leadership, and technological expertise make it one of China’s strong European partners. Given China’s increasingly assertive foreign policy, can and should Germany leverage this relationship to pressure China to abandon its more aggressive policies?

GW: Despite its leading role in the EU and its “special relationship” with China, Germany alone does not have enough leverage to substantially influence China’s foreign policy, especially where Beijing sees its “national core interests” at stake. Germany – like the EU – has pursued a cooperative approach with China at all levels and in all areas. Even though China might not always like it, Germany and the EU have to speak up for what they consider their core interests and values, for example the rule of law, including in international affairs. Otherwise we will undermine our credibility.

YCW: Tell me about the community of China experts in Germany. How strong is the community today? Where would you like to see it in the future and how can forums like the Young China Watchers contribute to its development?

GW: If we look at the universities in Germany, China expertise is fragmented, not least due to the fact that universities fall under the authority of the federal states. But there are some academic institutions where China expertise is bundled and a broader perspective can be offered to students, such as the GIGA Institute of Asian Studies in Hamburg. In terms of think tanks, there are several ones in Germany doing research on China, one of them exclusively (MERICS). Some others, like ECFR or my own institute SWP, look at China in the broader context of international relations.

From my perspective, Young China Watchers is a wonderful initiative since it not only creates a network at the national level, but also internationally. By providing a permanent platform of exchange it can definitely contribute to overcoming the fragmentation and to building a real community of China watchers in Germany and beyond.

Speaker Interview – Gudrun Wacker: Security Cooperation in the Asia-Pacific – What Role for Europe?