Dr. Hans Steinmüller is a specialist in the anthropology of China at the London School of Economics, where he is convenor of the MSc program ‘China in Comparative Perspective’. He has conducted long-term fieldwork in the Enshi region of Hubei province, focusing on family, work, ritual, and the local state. His research addresses ethics, gambling, rural development, and Chinese geomancy (fengshui).  He is the author of Communities of Complicity: Everyday Ethics in Rural China (Berghahn, April 2013).

Young China Watchers (YCW): To begin, what initially drew you to study ethics, family, and morality in China?

Hans Steinmüller (HS): In a way, all of these topics came out of my experiences living in a village in central China. For my PhD fieldwork I stayed in a village in Hubei province for 18 months doing participant observation—that’s the requirement for a PhD in Social Anthropology, and it’s not so different from “eating, living, and working together with the peasants,” as an old Maoist slogan has it. Before I started fieldwork I wrote a research proposal about peasant identity. My idea was to research the transformations of rural identities, given the rapid changes in the countryside over the last few decades. The initial answers I received were quite disappointing: No matter whom I spoke to, everyone seemed to agree that being a peasant is the worst and most pitiful position in Chinese society, and everyone in the countryside who had the chance would try to settle in the city and find a job there. But there are also other senses of belonging in the countryside, which are less easily accessible because they are not continuously repeated in public. That’s what I found in family and kinship relations—in weddings and funerals, for instance—and more generally in what I call “everyday ethics.”

YCW: How have moral uncertainties for society shifted as they interact with China’s modernization, i.e. urbanization, social mobility, capitalist forces?

HS: I think that ordinary people in China face a dilemma between official discourse and everyday practice. That has to do with the Maoist past, in which many elements of traditional culture were banned as “feudal superstition.” Since the 1980s, there has been a huge revival of many traditions such as local temple associations, Daoist rituals and Chinese geomancy (fengshui). But there is still ambiguity about what counts as contemptuous superstition and what counts as laudable tradition. That is relevant for many things that are Confucian in the broadest sense, including practices of gift-giving. Contemporary developments that have to do with the market economy do not make those problems disappear, but often intensify them. So for instance, in the countryside, there has been a huge rise of presents and money gifts at family celebrations (especially weddings and funerals, but also birthdays and house inaugurations). Because of the social pressure to participate, this has become a significant burden to many ordinary families. And while the government tries to clamp down on this phenomenon, denouncing it as “feudal custom” and “extravagant waste,” many officials feel the need to participate in gift exchanges in order to maintain their social networks. That’s also a moral dilemma: Official discourse condemns gift-giving, but Confucian morality and local practice demand it.

YCW: Ethics have been a part of China’s political discourse through its Maoist and socialist stages, and now under Xi Jinping’s anti-graft drive and embrace of Confucianism. This can present dilemmas like the one you mentioned. What sort of currency do ethics hold for those in power? 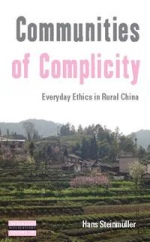 HS: Ethics and values are crucial to the legitimacy of government and to its soft power in the international arena. It seems to me that the current promotion of the China Dream corresponds to a realization of fundamental problems in both regards. Since the 1990s, many people have spoken about a “moral crisis” in Chinese society. Much of this talk hugely exaggerates the danger of moral decline, especially among young people, but Chinese society has certainly seen transformations of morals and values. On the whole these changes can be summarized as a movement towards a more diverse society that acknowledges different lifestyles, beliefs and expressions of individualism: a society in which consumerism plays a much more important role.

At the same time, political discourse is tightly managed and the rule of the party is justified by a clear ideological discourse. This is ultimately an ethical discourse; it tells you what is good and what is bad. The problem was that in Hu Jintao’s last years in office, no one seemed to believe in the party discourse any longer. Levels of trust were very low, especially after the downfall of Bo Xilai, the former party secretary of Chongqing. Xi Jinping’s campaigns, including the continuing crackdown on public-sector graft, respond to this situation with a new emphasis on moral government. The official discourse combines a number of elements, including references to Confucian ethics and a revival of Maoist discourse (such as the classical political practice of the “mass line,” for instance).

YCW: You recently chaired a panel discussion on the China Dream (中国梦) and the wide variety of aspirations and dreams in contemporary Chinese society. What was your overall takeaway; was there anything surprising or deserving of more academic attention?

HS: We had a very interesting discussion. I’m a huge fan of Chan Koonchung and I think his novel The Fat Years (a dystopian portrait of China set in 2011) beautifully caught the intellectual environment out of which the concept of the China Dream emerged. I think one thing the discussion showed is the typical difficulty that non-Chinese audiences have when trying to understand Chinese propaganda discourses—we talked for quite a while about the contradictions of government discourse and the different responses from intellectuals. At the end, I thought it might be worthwhile to focus more on the aspirations and dreams of ordinary Chinese people. Even though many dreams still have to do with wealth and security, I think today Chinese people also aspire to many other things.

YCW: The China Dream concept has taken the form of a military dream, an urban dream, a space dream, a rejuvenation dream, and a dream for all Chinese. Given your work in the everyday life of villages in China, how would you contextualize the China Dream?

HS: I think, first of all, we have to recognize that the China Dream is a propaganda concept, similar to the “harmonious society” or the “eight honours and shames.” In that sense, it is not much more than background noise that no one pays attention to, similar to the ubiquitous big-character posters you can see in every Chinese city. On another level, for many people the dream is about material prosperity for themselves and their families. Beyond that, there are also broader cultural and spiritual aspirations that are becoming increasingly common. In the 1980s and 1990s, most people were just concerned with material advancement. They still are, but now you also have a diversification of interests: people have more and more hobbies and interests. That includes all kinds of leisure activities, sports, and religion, amongst other things. And that is true not only in the cities, but also in China’s vast countryside.

YCW: Do you observe a growing interest in the field of anthropology in China both with Chinese and non-Chinese students? What advice would you give to those interested in Chinese anthropology and related fieldwork in China?

HS: The anthropology of China is a huge and thriving field. There are many exciting issues that remain underexplored, such as the emerging field of philanthropy and volunteering. But there are also traditional topics that still deserve our attention, including the transformations of kinship and rural development. Anthropology, with its method of participant observation, provides a unique perspective on society. Often people think that anthropology is about the trivialities of everyday life. That’s true—and other social science disciplines sometimes tend to neglect everyday life in favour of book knowledge. But while anthropology starts from a micro perspective, it always deals with the confluences of micro and macro perspectives. Basically, we start at small places, but we study big issues.

Regarding the anthropology of China, I think the biggest question for the future is what it can contribute to general social theory. China’s history and modern experience are unique in many ways. But very little general anthropological theory has emerged on the basis of Chinese data. Part of the challenge is that so much history, philosophy, and in the last hundreds years, sociology and anthropology, has been written in Chinese itself. For Chinese social science, I think the reverse challenge is how to integrate Chinese knowledge and Western anthropology, or how to” Sinify” Western social science. Ideally, both processes will lead towards a more informed theoretical contribution that Chinese anthropology can make to general social science.

Speaker Interview – Hans Steinmüller: The China Dream and Morality in a Modernizing China