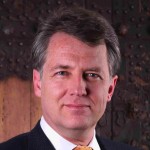 Jörg Wuttke is President of the European Chamber of Commerce in China, based in Beijing. He has held this role since 2014, previously serving as President from 2007 to 2010. He is also Chief Representative of BASF China, and has has worked in China since 1988.

Young China Watchers (YCW): When you first arrived in China in 1982, the country was not a focus of the European public or business community. What sparked your early interest?

Jörg Wuttke (JW): I wanted to run away from the German countryside I grew up in. I found it stifling as a young man. After I turned 50, I was attracted to the same village again, renovated my parents’ house, and will certainly retire there, so I will have come full-circle. China was so mysterious in the early 1980s; for me, the country was a must-see.

YCW: Given your background guiding European companies in China, how has the business environment for foreign firms changed over time? At what point were obstacles or risks at their highest?

JW: It has never been an easy ride. In the 1990s hardly any laws existed, which posed a major uncertainty for EU-based head offices. The good news was that European products did not face Chinese competition yet. Now Chinese products compete with ours everywhere in the world. With the exception of the two years following June 1989, it has always been a strong growth story. But now we are entering a phase of uncertainty. The low-hanging fruits of growth are plugged, and China has to avoid the middle income trap mentioned last year by Finance Minister Lou Jiwei. A challenge, but if the reform efforts pick up, the problems are surmountable.

JW: The new report explains how the central government’s efforts to address excessive production capacity have been ineffectual due to regional protectionism, weak regulatory enforcement, low resource pricing, misdirected investment, inadequate protection of intellectual property rights, and an emphasis on market share. The failure to adequately follow through on the commitments made over the last decade to address overcapacity has led to a deterioration of the problem. Without a sustained effort to address it immediately, overcapacity may seriously impede the effectiveness of China’s economic reform agenda.

The protracted Chinese economic slowdown has become the top business challenge. Pessimism about growth and profitability has forced European businesses to cut back significantly, particularly through headcount reduction: 39 percent are planning to cut costs—a large jump from less than just 24 percent in 2014—with most of them planning employee layoffs. China remains a key market and thus European companies want the “new normal,” much like China wants to move its economy up the value chain. However, the regulatory framework has yet to come into place. In particular, a better implementation of rule of law is seen as the top driver for China’s economic development going forward, according to the Business Confidence Survey 2015.

YCW: For more than 10 years you have been advising policymakers in the European Parliament and European Commission on the needs of European businesses in China. What are some policies that have benefited European firms in China? What should we expect ahead from European politics that may impact doing business in China?

JW: Primarily, EU business benefited from the obvious recognition by China that this great country was in need of technology and management skills. It was a market pull rather than a policy push. EU politicians facilitated that process, stepped in to demand market access, and defended EU companies in need of help in their fight against international property rights violations. Now we have reached a plateau and are eagerly awaiting the conclusion of the Bilateral Investment Agreement between China and the EU, which should be reached by 2017 latest. We are in need of a World Trade Organization 2.0 effect here.

YCW: What advice would you give to young China watchers seeking a career in the private sector in China?

JW: Read. Read a lot. Chinese history and novels, not just MBA material. Engage, be curious, and build up networks. This is a magnificent country, with an enriching culture and spectacular entrepreneurial people. Day-to-day encounters can be often so frustrating, while traffic and environment problems disguise the beauty of this nation. Hang in there and contribute ideas to this country. It is better to light a candle than to lament the darkness.