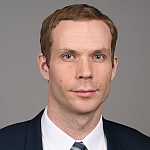 Lance Noble is a Senior Analyst at Gavekal Dragonomics where he produces research reports on major developments in China’s industrial policy, political economy and foreign policy of interest to international corporations, investors and governments. Previously he was Manager for Policy and Communications at The European Union Chamber of Commerce in China where he was the lead analyst for major publications on Chinese industrial policy as well as the Chamber’s media strategy. Prior to that, he was a China-focused analyst for the government of British Columbia, Canada and an independent consultant. Lance holds a PhD. in political science with a focus on Chinese politics and foreign policy from The George Washington University and a M.A. in political science from The University of British Columbia. He speaks and reads Mandarin Chinese fluently.

Young China Watchers (YCW): How effective has Made in China 2025 (MiC2025) been at upgrading China’s industry and fostering innovation among domestic companies so far?

Lance Noble (LN): MiC2025 is the first of a three-stage initiative to establish China as a global manufacturing power by 2049. While in the past, other Chinese industrial policy initiatives have fizzled with some of their components later reemerging under a new title, since MiC2025 was officially launched less than three years ago, it’s important to take a long view of what it aims to accomplish. If looked at in isolation, past Chinese industrial policy for the 3G and 4G telecommunications standards may appear to have been unsuccessful. State planners, however, probably viewed them as making incremental steps toward the position China now holds as a global co-leader in 5G, one of the fundamental building blocks of the fourth industrial revolution. This is not to say that MiC2025 will be this successful in all areas. It won’t, especially as the willingness of the U.S., the EU and Japan to respond to Chinese industrial policy has strengthened considerably. But neither should it be underestimated.

To date, the initiative is producing a range of outcomes. For example, extensive state support offered by multiple levels of government to the industrial robotics industry has produced significant overcapacity with minimal evidence of domestic firms strengthening their positions. As politically connected firms are the ones that are most likely to receive subsidies, state support can actually undercut the ability of China’s best private firms to compete, in part by preventing consolidation and the economies of scale that the best firms would gain if such a process were to go forward. This leaves them with fewer funds available to invest in research and development (R&D), something necessary to their long-term ability to move up the value chain. Last year the central government had to step in to raise standards for entry into the industry.

YCW: Compared to other national initiatives such as Germany’s Industry 4.0, MiC2025 adopts a rather top-down approach, with the government playing a larger role in funding projects. Can you outline some of the policy tools Beijing is using? Do they represent the primacy of policy over commercial incentives?

LN: Restrictions on access to the Chinese market for foreign-invested enterprises (FIEs), including for government procurement contracts, have been maintained in industries that are priorities for development. Chinese government-backed investment funds are being used to both consolidate domestic industries as well as to make technology-seeking acquisitions abroad; state-owned enterprises (SOEs) have been merged in a number of fields. While their subsidiaries are often made to continue to compete with each other for business in the Chinese market, the merged firms compete for business abroad as one entity in order to avoid having Chinese firms undercutting each other in international markets. Financial policy is also being used to direct funds controlled by state-owned banks toward targeted industries.

None of these tools are based on the market as it is understood in the West. The Chinese authorities instead currently talk of ‘top-level design.’ With this approach, the government sets the direction and goals with the market then used as a tool for achieving them.

None of these tools are based on the market as it is understood in the West. The Chinese authorities instead currently talk of ‘top-level design.’

YCW: How should foreign companies respond to MiC2025?

LN: First, they should start by appreciating that there is a long-term Chinese strategy in place that can be expected to lead to a narrowing of market access for FIEs if domestic firms are able to catch up. Consider the industry segments where overcapacity is most likely to emerge as a result of state support and plan accordingly. If possible, expand investments in R&D in order to maintain your competitive edge. Monitor international acquisitions by Chinese companies in your industry and consider how they will impact your competitive position in the Chinese and other markets. Last, try to get ahead of the curve by reviewing how policy tools being used in other industries covered by MiC2025 could be applied to your own.

In the near- and mid-term, the initiative will drive an expansion of demand for key components, technologies, and services that Chinese firms aren’t currently able to produce themselves. Evaluate the direction that policy support is likely to drive the market and position your firm to capture growth.

YCW: To what extent do you think foreign companies’ concerns about forced technology transfers and eventually being squeezed out of certain markets are justified? Which industries will be particularly contentious in this respect?

LN: Sino-foreign joint ventures and other market entry requirements that lead to the transfer of some knowhow and intellectual property are longstanding parts of the tradeoff international firms have accepted for access to industries like automotive, aerospace, high-speed rail, semiconductors and cloud computing. Going forward this can be expected to continue in industries and technologies that the Chinese authorities deem sensitive for state security, which they tend to define more broadly than their Western counterparts.

While international firms in one of these industries could choose not to set up shop in China, it is extremely difficult to resist in areas where it is a key driver of global demand and growth. Nor would a firm necessarily benefit if it held back and declined to participate while its international competitors chose to pay the current price of market entry. Technology transfers would likely still take place, the Chinese company gaining knowhow and technology may still become a future competitor in international markets and, at least in the near- and mid-term, business won by the international firm that did enter the market could allow it to cut its prices or invest more in R&D, thereby rendering it a stronger competitor in other markets as well. It’s not an easy choice to make.

YCW: How realistic are the localization targets outlined by the Ministry of Industry and Information Technology (MIIT)? What are the potential adverse effects, such as forcing Chinese companies to use inferior domestically produced industrial inputs to meet policy goals?

LN: It is not unusual for ambitious targets to be set in industrial policy initiatives; setting modest ones isn’t politically palatable. Flexibility has also been built into them by way of the ambiguity regarding whether China-based production by FIEs counts toward their fulfillment. My view is that MIIT and the Chinese Academy of Engineering would be happy to see the targets reached without counting production by FIEs toward them, but the approach taken makes it possible to claim success regardless. No one wants to fail to hit their key performance indicators!

Chinese firms that want to innovate and compete in international markets benefit from being able to source the components and services which provide them with the best combination of quality and price. Denying them the ability to do so can limit their competitiveness outside of the more protected Chinese market. When they’re producing industrial goods, this also means that their customers in China can end up unable to use the option best aligned with their own needs. At the same time, due to the scale of China’s market, in industries where it isn’t splintered by local protectionism, support for infant industries through measures like preferential market access as well as joint venture requirements placed on foreign companies can allow Chinese firms to significantly strengthen their competitiveness before they’re made to directly compete with international ones.

The Belt and Road Initiative is also in part an attempt to gain business for Chinese firms in international markets, which are seen as more likely than the US, Europe and Japan to be open to purchasing Chinese products further up the value chain. Targeted industries include telecommunications equipment, cloud computing, cross-border e-commerce, and services related to smart cities. If successful, the resulting profits would enable firms to further strengthen their competitiveness with expanded investments in R&D.

The Belt and Road Initiative is also in part an attempt to gain business for Chinese firms in international markets.

YCW: Innovation in areas like AI and big data are enabling an unprecedented level of information collection in China, what has the impact been on the economy and business operations there?

LN: The enormous amounts of data being collected by a handful of Chinese firms have enabled them to move forward with the development of big data and artificial intelligence (AI) applications. While the Chinese government also controls large datasets that it states will become more accessible to the public, this appears to still be very much a work in progress. Regardless, there’s a clear desire on the part of both Chinese technology companies and the authorities to strengthen China’s position in both fields, in no small part due to their importance to upgrading the country’s position in a wide range of other industries.

The limited restrictions that are currently in place in China mean that data can be used very flexibly and easily accessed by firms that want to purchase it for their own use, including AI startups. While this has clearly facilitated rapid development in the field of facial recognition technology, in areas like gene-editing it raises important ethical questions. In the West and Japan, regulatory systems are generally put in place before industries are permitted to develop. In contrast, China has often displayed a higher level of openness to allowing industries to move forward while relevant regulations are still in the process of being established, often in response to developments in the market. There are pros and cons to each approach: If government oversight is too stringent, industries may develop slowly or only to a limited scale; if oversight is instead minimal, they may develop in directions that create social problems, including a lack of trust in how personal data is used. The Chinese authorities are no doubt aware of this and are in the process of developing rules and regulations regarding how the privacy of personal data should be handled, but the final result is not yet clear.