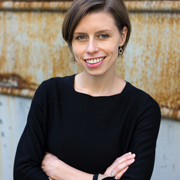 Mara Hvistendahl is the author of “Unnatural Selection: Choosing Boys Over Girls, and the Consequences of a World Full of Men,” a finalist for the Pulitzer Prize. She is a contributing editor to Science magazine and a founding member of Deca, a cooperative of award-winning writers telling global stories. She studied comparative literature and Chinese at Swarthmore College and earned her master’s degree at Columbia University’s Graduate School of Journalism. She spoke for YCW Shanghai in June 2014.

Young China Watchers (YCW): You moved to Shanghai at the age of 24 to work as a freelance writer. What was your China-related experience prior to that move, and what drew you to Shanghai?

Mara Hvistendahl (MH): My mother spent part of her childhood in Taiwan as a missionary’s daughter and later returned to the U.S. to study Chinese history and language. When I was six years old, she and my father divorced, and she was left with a mortgage to pay off and not much money. She took in a Chinese friend as a roommate. It turned out to the beginning of a lifelong friendship (we still celebrate many holidays together) and led to me studying Mandarin.

I minored in Chinese in university and studied abroad in Beijing. After I got my journalism degree and started working as a freelancer in New York, an editor told me that it would be foolish of me not to move to China. A few months later, in October 2014, I flew to Shanghai. 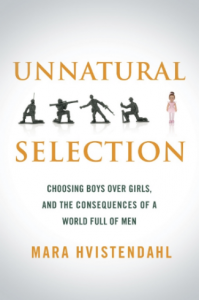 YCW: Your 2011 book, “Unnatural Selection” explored the global phenomenon of sex selection. Just last month, the Communist Party announced an end to the one-child policy that has stood for 35 years. Will this be the end of “choosing boys over girls” in China? What are the long-term consequences of China’s current gender imbalance?

MH: I doubt it. Loosening the policy could have some effect, but it will likely be small. In 2010, the last year in which a census was conducted, 118 boys were born for every 100 girls—far above the natural sex ratio of birth of 105 boys per 100 girls. The government claims that the sex ratio at birth is declining, but we won’t have the data to show that for certain until 2020. More importantly, even if the sex ratio at birth were to normalize tomorrow, demographers say China will still be left with an enormous imbalance among adult males, with the effects rippling out even in 2050. In a society with a stable fertility rate, men might marry younger women to offset the gender imbalance—but the birth rate is currently so low there are fewer and fewer young women coming into the marriage market. Ultimately, as I showed in my book, the imbalance leads to bride-buying, increased use of sex workers (which in turn leads to increased transmission of HIV), and a rise in crime and instability.

YCW: As a science journalist in China, you’ve covered both discoveries and scandals. You’ve covered controversial research, the smuggling of stolen US-patented corn, and in 2013, you led an undercover investigation into “a thriving academic black market in China involving shady agencies, corrupt scientists, and compromised editors.” Has the anti-corruption drive under President Xi Jinping made an impact on China’s scientific community?

MH: Definitely. A number of science officials have been sacked for corruption. I actually undertook a second major investigation for Science magazine in 2014 into foreign scientists’ allegations that their universities didn’t reveal key details about government grants the scientists had received while in China.

YCW: Since 2007, China has trailed only the United States in scientific publications, and state funding for research has expanded dramatically in recent years. However, as you have covered, the country has struggled to maintain scientific credibility and to attract and retain top scientists. What challenges do scientists in China face today, in terms of politics, reputation, or other factors?

MH: Good question! The main issue that researchers cite—especially by scientists who have spent years building up their careers overseas—is the need to spend precious time cultivating guanxi in order to get ahead. Academic appointments in the west entail a degree of networking, to be sure, but exceptional work stands on its own there more than in China, or so I hear. The other issue scientists mention is the lack of tenure. Some universities are experimenting with tenure-like systems, but they are the exception, not the rule. That’s one of the main reasons it’s hard for China to retain top-notch scientists on a full-time basis. 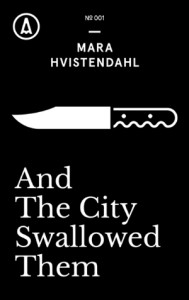 YCW: Your most recent book, “And The City Swallowed Them,” tells the true story of a young Canadian model’s murder in Shanghai, presumably by a migrant worker from Anhui Province. You use the incident to examine the human costs of China’s rapid urbanization and its evolving criminal justice system. What drew you to this particular crime, and how did the discoveries you made in the reporting process illuminate these more complex issues?

MH: I lived not too far from where Diana O’Brien was murdered on Zhaohua Lu. I was living alone in an unguarded gongfang, and I’d never thought of Shanghai as dangerous. The news was both shocking and confusing. The murder wasn’t reported in China until a few days after it happened, and the model agency Diana worked for promptly closed. By the end of the week, the police announced that a migrant worker had committed the crime. This all happened a month before the 2008 Olympics, and people suspected a cover-up.

As I looked deeper, it became clear that migration would play a significant role in the piece. Both Diana and her accused murderer, who may or may not have actually committed the crime, were outsiders in a strange city. Their lives had interesting parallels. The case against Diana’s alleged killer also opened up little-known information about the application of the death penalty in China.

YCW: What advice can you offer young writers and journalists who aspire to uncover surprising, important stories in China today?

MH: Don’t avoid a story just because everyone else has covered it. If you can come at it from a new and innovative angle, or if you have a hunch that much of the coverage is wrong, then go for it. Both the gender imbalance and the murder at the heart of “And The City Swallowed Them” had been extensively covered by the time I began my investigation. But in both cases the coverage left me with more questions than it answered—and many others probably had the same feeling.