Qian is the Deputy Director and the first Chinese analyst to join The Economist Group’s research arm—The Economist Intelligence Unit (EIU). Under her leadership, the EIU’s Access China service has expanded into a global team of analysts covering China’s 31 provinces and 287 key prefectures.

Qian Liu (QL): From a statistical point of view, there is no such thing as “leftover women” in China. Interestingly, this phenomenon does exist globally in big cities. Lena Edlund published an Economic paper called “Sex and the City”, and it finds that there are more women than men in urban areas globally. Her argument is that women go to urban areas searching for both a better labour market and a better marriage market. However, in China the sex ratio is so skewed towards men that even if many more women were to move to cities, that would only dilute the surplus pool of available men. According to the 2010 China Census, the gender ratio of newborn babies is 1.19. That is, for every 100 girls born, there are 119 boys. If you do the math, every 5 women has a marriage pool of 6 men, and one out of every six men are not able to find a wife. That’s pretty shocking.

I focus on people between 20-39 years of age in urban areas, as this cohort has both a stable labour market and a stable marriage market. For all the prefecture-level cities in China, in metropolitan areas, the male-to-female sex ratio is on average 1.05, which means that there are still more men than women in this age cohort. Cities such as Nantong and Haikou have a balanced sex ratio of 1, but in Erdos, the renowned ghost-city, the ratio is a staggering 1.42. The city of Wuhan in the province of Hubei has the lowest ratio of 0.83. As for Beijing, Shanghai and Guangzhou, the ratio is 1.09, 1.07 and 1.11, respectively. Even when one looks at families with at least a college degree, the sex ratio is 1.06, even larger than the 1.05 average.

That said, while quantity-wise there are more men than women, the census does confirm that, as one’s education level increases, his or her marriage rate declines. All of this data tells us that the so-called “leftover women” phenomenon is not a number story but rather a matching problem. 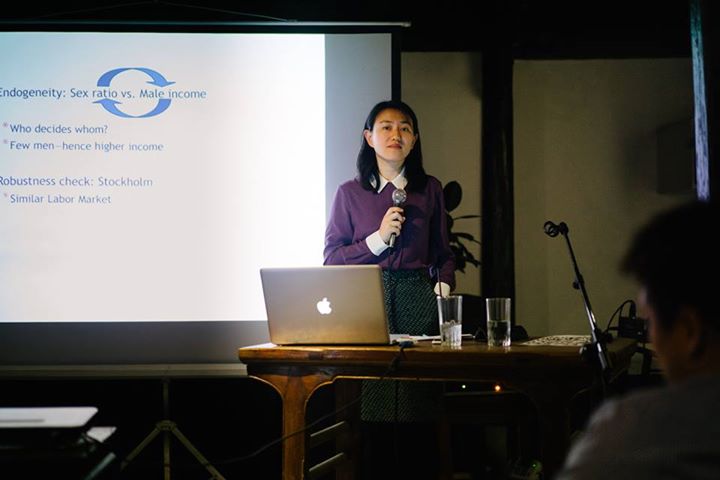 YCW: What do you mean when you say the “leftover women” phenomenon is more of a matching problem than a number story?

QL: Economists like to talk about supply and demand, so let me borrow the labour market’s theory and apply it to the marriage market. Take supply for instance. Family economics, pioneered by Gary Becker, argues that when female education and employment conditions improve and they develop better opportunities and income, their traditional attractiveness from a marriage perspective decreases. This leads to a lower supply to the marriage market. At the same time, people say women can be increasingly picky and have double standards, which can also be true. But it is equally true that men have double standards. A paper by Jennie Hwang argues that men cannot accept educated working women who outsource their housework. When the type of women men wish to marry is very different from what modern women seek to be, there exists the mismatch. Both men and women could have double standards, and their expectations for marriages should adjust accordingly. I am not saying that one should alter his or her expectations for a happy marriage, but what I emphasize is that one should base expectations in reality.

YCW: In the 1950s, Chairman Mao Zedong proclaimed, “women hold up half the sky”. This year is the 20th Anniversary of the Beijing Declaration and Platform for Action, a United Nations agreement made in Beijing 1995 on gender equality and empowerment for women. How would you summarise the empowerment of women in China from the founding of the People’s Republic to now? What has changed?

QL: The “women hold up half the sky” generation benefited greatly and made significant strides. I am sad to say that gender equality has moved backwards in recent years. Some economic literature argues this has to do with rapid economic development and increased income inequality. When you hear the Chinese joke, “there are 3 types of people in the world: men, women and women with Ph.Ds”, you laugh at first, but then you are taken aback. What kind of message does this send to young women? This message tells them that an academic or professional woman is not accepted and that successful women could be punished for their professional success. This is fundamentally unfair and prevents women from participating in or contributing to China’s social and economic development.

YCW: There has been a preference for sons in China for many years, a trait commonly found in traditional societies. This has resulted in one of the most serious global gender imbalances among the Chinese population. How will this imbalance affect Chinese men? Is there a solution?

QL: To start with, a preference for sons is in no way limited to China or other emerging economies. Serious academic literature has found that this trend can also be found in developed countries. But yes, you are right. This is very serious. While my talk focuses on “leftover women” in China, I do in fact believe we should pay more attention to leftover men. Ebenstein and Sharygin estimate that, for Chinese born between 1980 and 2000 (15-35 years old in 2015), men outnumber women by 22 million; furthermore, 10.4% of them will be unable to find a wife. While the “leftover women” tend to be more highly educated and better-paid, many leftover men live in poor rural regions and have only a marginal opportunity to find their significant others. The catch is that urban men can and do often marry rural women, but what about rural men? In rural areas the sex ratio is even more skewed. Some rural men are driven to purchase wives, for instance, from Vietnam. But not all of them can afford this luxury. A skewed gender ratio is associated with higher crime rates, and what happens to these men when they grow old? Chinese leftover men are now joining other countries’ leftover men and competing for the available women.

To improve one’s odds, a man can adjust their expectations, strive to be more attractive, or change locations. Also, a relaxation of the “One Child” policy is called for more than ever – we need to make changes today in order to effect tomorrow.

YCW: In April 2014, a group of university students campaigned topless for women’s rights in Guangzhou. This has since been followed by a spate of other eye-catching stunts. How sensitive is this issue?

QL: Demonstrations are not always well-received in China. The good news is that there is now a critical mass of women who embrace life with passion, independence and critical thinking. Together we will make a difference, so we need to keep lobbying for gender equality.

YCW: You have built a successful career as an economist on China. What has been the biggest obstacle for you in your career so far and how did you overcome it?

QL: Overall, I have much enjoyed my work to decode and demystify China’s economy, especially as a Chinese person based in China. I genuinely hope to see a better understanding of what the Chinese economy really is. We cannot talk about China without talking about the different parts of it. That would be akin to talking about Europe without mentioning the differences between the Greeks, the French and the Germans. The lack of Chinese data transparency, the extremely fast pace of change in the economy and in society, and the stereotypes people have in mind about China – these are the biggest obstacles for me. But I am pleased to see the progress so far, and I’m both curious and optimistic about what’s coming next.