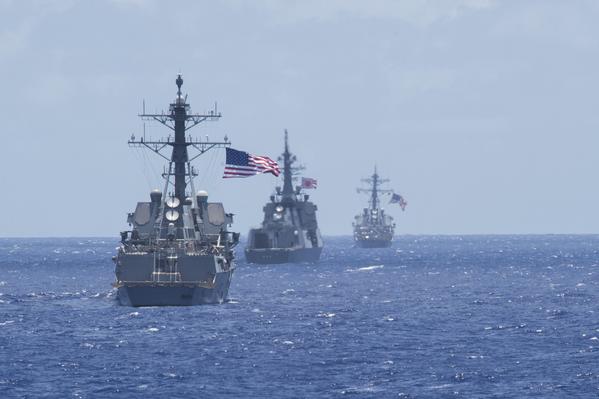 Last month, 70 years after the end of World War Two, protests outside Japan’s Diet and quarrels within its walls unfolded over the passage of legislation aimed at expanding the role of Japan’s Self-Defense Forces (SDF). The new security law, pushed through by Prime Minister Shinzo Abe’s governing coalition, allows the military to engage in overseas conflict in response to a security threat to Japan or its allies.

Some in the Japanese public and political opposition argue the law violates the Japanese constitution (Article 9 renounces war), destroys its image as a pacifist country, and risks pulling Japan into “American wars.” Meanwhile, supporters of the law, which comes into effect by May 2016, claim that Japan is taking a natural step towards modernizing its military.

The implications reach beyond Japan’s domestic affairs. The ramifications are especially clear in how Chinese and U.S. leaders have responded to the shift in Japan’s security policy.

The new guidelines provoked a negative reaction from Beijing. State news agency Xinhua described the change as a “dark stain for Japan,” asserting that Abe is blotting out 70 years of pacifism for the chance to remilitarize. Chinese officials often refer to the long history of hostility between Japan and China to lend weight to this rhetoric. Conflict between the two countries is centuries-old, intensifying with Japan’s victory in the first Sino-Japanese War (1894-1895) and enduring after Japan lost all of its mainland gains in 1945, at the end of the second Sino-Japanese War.

This past stirs up contention in the Pacific, particularly concerning the Diaoyu/Senkaku islands in the East China Sea. China justifies its growing presence in this disputed territory by stating that it is simply defending the territorial claims it has held for centuries. However, its emergence as a maritime power in the Pacific troubles not only its neighbors, but also the United States­. Friction between U.S. and Chinese maritime forces poses a threat to U.S. naval dominance in the Pacific.

In this context, the U.S. has embraced the expanded role of Japan’s SDF to boost American power in the region. With involvement in conflicts in Afghanistan Iraq, and Syria, the emergence of armed non-state actors, and Washington’s commitment to patrolling the high seas, U.S. military forces are overextended. Japan, as a key ally in the Pacific, could help mitigate this problem by giving its military more “muscle” with the passage of the security legislation. A high-ranking Japanese Defense Ministry official reported that a U.S.-Japan joint action plan for defending the Senkaku/Diaoyu Islands is already under consideration.

Beijing views Japan’s new legislation through the lens of distrust, rooted in a history of confrontation and contempt. A more powerful Japanese SDF threatens China’s rising territorial claims and maritime power. On the other hand, Washington welcomes the legislation because it bolsters current U.S. naval strategy in the Pacific.

Yet, both the U.S. and China want to improve bilateral relations, especially in regards to military interactions. At the end of President Xi Jinping’s state visit to the U.S. in September this year, he joined President Barack Obama in affirming a series of confidence-building measures intended to decrease friction between their countries’ military forces. As the U.S. and China endeavor to build trust and transparency in their relationship, changes to Japan’s military policy inevitably complicate the security dilemma in the Pacific. Improving relations with China while supporting an alliance with Japan will require a carefully managed juggling act by Washington.