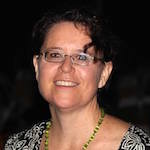 Sarah Schneewind holds degrees from Cornell University, Yale University, and Columbia University. She has studied the relations between state and society during the Ming era (1368-1644) in three books. “Community Schools and the State in Ming China” shows change over time in the local implementation of one policy, arguing that the center did not determine the policy’s course. “A Tale of Two Melons” traces the way the first Ming emperor, his advisors, and people at the local level interpreted one lucky omen. “Shrines to Living Men in the Ming Political Cosmos” argues that shrines to living officials (生祠) constituted, among many other things, a legitimate way for commoners to participate in politics under the autocratic, bureaucratic Ming monarchy. Schneewind teaches courses on Chinese, Japanese, and Korean history at UC San Diego. She has been President of the Society for Ming Studies, and runs a website called “The Ming History English Translation Project.” She has also developed a digital tool called The Late Imperial Primer Literacy Sieve.

Young China Watchers (YCW): How did you first become interested in Chinese history and the Ming Dynasty specifically?

Sarah Schneewind (SS): When I was a teenager I wandered around New York City a lot, and the signs in Chinatown intrigued me. I took a high school course in Comparative Religion in which we read the Analects of Confucius and the Dao De Jing, and I thought I could sense how lovely the Analects would be in a classical language. So I started taking Chinese in the evenings at Hunter College in order to read the Analects. Now I get to teach that book, and I still love it.

A person’s interests, I think, are like falling in love—there’s no real rhyme or reason to it.While working in China after college graduation I got interested in the life of the countryside, so I did an MA at Yale taking courses in political science and sociology, with one course on women’s history taught by Emily Honig. Then I worked at the National Endowment of Democracy (NED), during a very interesting time: November 1988 to summer of 1990! The NED was deeply involved in all the movements of 1989 so I translated for Wu’er Kaixi when he came into our office, met Hu Ping, and followed the developments in Eastern Europe very closely. When I went to Columbia for a PhD in History, Qing seemed too crowded—too many people studying the period—so I moved back to Ming.

YCW: How did you choose your focus in the field?

SS: When I started studying Ming, the dominant idea in the field was the tremendous impact the Ming founder, Zhu Yuanzhang, had on all aspects of Ming life. The fall of the Ming after 276 years was even blamed on decisions he had made in the late 14th century! That didn’t make any sense to me, because I had learned in graduate school that even Mao, with much greater technological resources, had not been able to control state and society and people’s thoughts; they read the Little Red Book, for instance, and interpreted it in all kinds of different ways.

So I decided to tackle the idea that Zhu Yuanzhang’s decisions were the determining factor in Ming history. First I located as many of his village-level policies as I could, and it turned out that he changed them repeatedly, because people resisted them. Then I selected one policy, the call for village level “community schools,” and my dissertation tracked the implementation of that policy. It showed that Taizu’s edicts, and the imperial will later in the dynasty, were not the key factors in policy about the schools. Rather, different cohorts of officials, and eventually local people, came together to decide whether to have local schools and what they should teach.

YCW: Your new book “Shrines to Living Men in the Ming Political Cosmos” talks about the role living shrines played in providing a political voice for common people. What made the shrines a mode of expressing public opinion that was acceptable to the government?

SS: When a magistrate left a county where he had been serving, in Ming times it was legal for people to honor him by setting up an inscription on stone (stele) describing what he had done and/or to set up a shrine with his image (painted or sculpted) or name tablet in it. The first such living shrines occurred in Han times, and the way they were used went through various changes in Tang, Song, and Yuan. Because the man was still alive, scholars have assumed that these shrines and steles were nothing but flattery by local gentry who were hoping for favors as he moved up in the bureaucracy. But in fact, many shrines and steles honored men who were unlikely to move up (for instance, they did not hold a metropolitan examination degree) or who were retiring. They lauded one man, but they also criticized others—those who had preceded him in office, or even those who succeeded him in office.

The honor and the blame focused on policies: not on whether a fellow was a good guy, but on whether he had lowered taxes, protected people from central government demands, carried out justice in a fair and merciful way, dealt with security threats but understood that local bandits were often people who had run out of other options, built bridges to facilitate commerce, etc. That meant that the steles laid out a program of what policies locals liked. And the specific audience was officials who came later. On their initial visits to the major shrines of the area, they could be taken to the living shrines of their predecessors and shown exactly what actions had earned such honors from locals.

Crucially, because the danger of flattery was obvious to all, in order to be proper living shrines had to be sponsored by a broad segment of the local population, especially commoners (people without any examination degree, but who might still be quite wealthy or powerful). Typically scholars have said that commoners did not have a legitimate political voice in Ming times, and could only riot, or protest, or petition, but not create or participate in politics institutionally. But in this way, living shrines offered an institutionalized way for locals, including commoners, to participate in Ming politics. The Mandate of Heaven ideology meant that government was supposed to care for the people’s livelihood, and people in Ming times expanded this to mean that the government should actually listen to what they had to say.

“While some of the Ming founder’s propaganda had to do with kicking out foreigners, that was propaganda, and it was useful when in late Qing people wanted to oppose the Qing dynasty by emphasizing that its ruling group also came from the north and had created an ethnic identity as “Manchus.” And it is still useful today to those who want to argue that “Han” ethnic identity is something real, with a pure and unchanging history. In fact, many different groups have coalesced and split apart repeatedly in a complex dance of power and social relations in which “ethnic” claims are part of the talk that goes on.”

YCW: What do you think is the greatest significance of the Ming Dynasty being the last dynasty in power ruled by Han Chinese?

SS: Ethnic labels are never straightforward facts, but are only ever claims: political claims made on the basis of some kind of group identity without clear borders or a firm shape. It is true that the Mongol Yuan dynasty had refused to allow southern Chinese to take the civil service exams and hold office, but along with Muslims of various nationalities they did employ Northern Chinese. On the other hand, there were lots of Mongols still living in Ming China and serving in the Ming army. Ming adopted many government institutions that developed under Mongol rule, including the provinces more or less as they still exist today, the registration of households in hereditary categories (Ming had many fewer categories), reliance on the Four Books and Zhu Xi’s commentaries as the core of orthodox education for the exams, and community schools.

As David Robinson has shown, many elements of the Yuan style of rulership, especially in its foreign relations, also continued for the first half of Ming or so. Imperial commitment to Tibetan Buddhism is one example. The third Ming emperor, Yongle (the one who sent out the Zheng He expeditions) was half-Mongol himself.

So while some of the Ming founder’s propaganda had to do with kicking out foreigners, that was propaganda, and it was useful when in late Qing people wanted to oppose the Qing dynasty by emphasizing that its ruling group also came from the north and had created an ethnic identity as “Manchus.” And it is still useful today to those who want to argue that “Han” ethnic identity is something real, with a pure and unchanging history. In fact, many different groups have coalesced and split apart repeatedly in a complex dance of power and social relations in which “ethnic” claims are part of the talk that goes on.

YCW: What are some of the most lasting effects of imperial China and its systems of governance?

SS: The Qin and Han government and political theory, and those of Song, Ming, and Qing, have had a dramatic impact on governments around the world. Key ideas and institutions center on a system of public government. The emperor held the throne with a duty to assure the people’s livelihood, not by divine right. Officials held office based on their competence and performance, not based on their birth into a particular family. Each official held a given office for only a certain period, and could not just hire all his relatives to work for him. Public funds were separate from private estates, and officials worked for salaries; an official who hired his relatives or used public funds could be impeached as corrupt. This was all very different from the aristocratic systems of Zhou times, Tang times, the Hei’an period in Japan, or Europe for many centuries, and these ideas, transmitted from China by translations, were important in helping the new Enlightenment-era middle class in England and Europe to articulate a critique of aristocracy.

And there’s more: Under bureaucratic imperial government, taxpayers had the right to petition the government for redress of wrongs, and to bring civil and criminal lawsuits to be settled by a public court. Above the village level there was no mechanism for electing officials, but at the same time, officials were also not merely chosen by the emperor; there was a whole machinery of fitting them to offices to which they were well-suited, assessing performance, and then promoting or demoting them on that basis. We hear dramatic stories about men who spoke up and were punished by tyrannical emperors, but those were the exception and went against the theory of the system—much as there are abuses of power even in the U.S. today.

The civil service examination system was of course stacked in favor of those who got a good classical education at home, just as children from college-educated and wealthy households in the U.S. today have an advantage; but just like our system, it did mean that boys from low-ranking families could hold government office. It was the model for educational systems in Enlightenment France (where the college system was called ‘le system chinoise’) and for the civil service system in the U.S. and UK.

The requirement that government assure a stable livelihood, if only to maintain its tax base, led to state granaries that released grain onto the market to lower prices in times of shortage, and these “ever-normal granaries” were adopted by Henry Wallace in the Roosevelt administration. The term “laissez-faire” was coined by a Frenchman, Du Quesnay (known as the French Confucius), to translate the Daoist term “wu-wei” or non-intervention and promote trade policies more like those of the Chinese government to counter mercantilism.