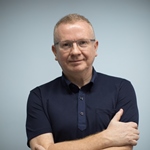 Colum Murphy is the Editorial Director of Sixth Tone, an English-language digital publication based in Shanghai. Sixth Tone, which went live in April 2016, belongs to the state-funded Shanghai United Media Group, and is the sister publication of The Paper (澎湃). Colum was previously a transportation correspondent for The Wall Street Journal in China, and is a former deputy editor of regional publication the Far Eastern Economic Review.

Young China Watchers (YCW): How did Sixth Tone get started? Who were the main players and how did you come to be involved with his project?

Colum Murphy: The actual decision to set up Sixth Tone predates me. I joined the project team, which at the time was nameless in January 2016. Our sister publication The Paper (澎湃) was already one of the leading digital platforms among Chinese-language media outlets. Management pursued innovation on a number of levels and one idea was to move into to the digital space for English-language news about China.

Before joining Sixth Tone I worked as an automotive reporter for The Wall Street Journal in Shanghai for three years. When my contract finished, I wasn’t ready to leave China or the media industry. I felt that I had barely scratched the surface. I was doing mostly corporate reporting, covering the likes of BMW, GM or Toyota in China. It was an important and fascinating segment of the China story but by no means the only one. I wanted to stay and learn more about China. I was alerted to the project by a journalist friend in Shanghai. When I met the then editor-in-chief, I knew immediately that this was something I just had to do.

“We are interested in human-centric stories but we don’t want to go down the road of sentimentality. We just want to tell the stories of real people and real situations in China. By China, we mean the whole country and not just Beijing, Shanghai and Guangzhou.”

CM: To me, there are four main categories in this space with their own characteristics, target audiences, and constraints. There’s the foreign media such as the Wall Street Journal, New York Times, Washington Post and Reuters. These publications do an amazing job covering geopolitical and macroeconomic stories. Issues like China and the United States for a U.S.-based publication, for example, would always need to address home-country issues. What is China doing that might affect car workers in Michigan? At the same time, their resources in China are not endless.

Another category is the established Chinese media outlets like Shanghai Daily and People’s Daily. While they are well resourced, they are limited in the range of storytelling they can do as they are there to present the official China view of the world.

Then there are the emerging global digital platforms such as Quartz and Buzzfeed. We could even include newsletters such as SupChina and Bill Bishop’s Sinocism. These platforms are usually reporting from outside Mainland China. They are a step removed from what’s going on in China so there’s sometimes a sense of delay.

Finally, there are the English-language publications that cater to the foreign community living in China such as That’s Shanghai or Time Out. Their stories are meant to help foreign residents get to know China.

Sixth Tone is somewhere in the middle of all these categories. We are Chinese-owned but we’re a purely digital, English-language publication. It’s not just a question of one’s space in the digital landscape or the media landscape, we also need to ask, “How are we going to do something different?” Our tagline is “Fresh voices from today’s China.” We are interested in human-centric stories but we don’t want to go down the road of sentimentality. We just want to tell the stories of real people and real situations in China. By China, we mean the whole country and not just Beijing, Shanghai and Guangzhou. We invest time and resources to go to places that would not normally be visited by the English-language media.

Another thing that differentiates us are the tools we used to tell stories, tools that other China-focused digital publications either don’t have or don’t fully embrace. That’s not to say that we’re perfect, but we’re learning quickly and we want to use a variety of storytelling tools. That means we aim to produce video, text, photo, audio and interactive HTML5 content.

YCW: Sixth Tone covers many niche issues that might otherwise be ignored by traditional English-language media outlets. How do the editors and writers go about choosing what topics and stories to pursue? As part of the Shanghai United Media Group (SUMG), is there a sense that Sixth Tone is there to provide a more balanced view of China (讲好中国故事)? Has the connection to SUMG helped or hindered Sixth Tone’s editorial mission?

CM: It’s been more than a year since we started so we now have a sense of what a Sixth Tone story is. As I had mentioned, our stories are human-centric. One thing we’re also looking to do is to continuously update and modify that definition of what makes a Sixth Tone story. We don’t want to become formulaic. We don’t want to abandon areas of strengths, we want to build new ones.

When we launched, we had coverage from the likes of the New York Times and Foreign Policy. They were very skeptical about Sixth Tone, which was interesting and frustrating because all I could say to people was, “Come back to us in six months or a year and judge us then.” We don’t come into the office every day and ask, “How can we provide a more balanced view of China?” We think about how we can tell amazing stories. What we do ask is how we can write a story that either covers a topic that has not been highlighted, at least in English, before, or if it has, how we can do it in a better way, in a way that moves the discussion forward, challenges stereotypes and shows the situation as it is.

We are Chinese-owned and part of SUMG. Operating in media in China is fraught with sensitivities and obstacles. It’s not an easy landscape in which to operate. There are moments when a story that we’ve worked on doesn’t get published for whatever reason. These are the sensitivities and constraints of working in China. I think it would be wrong for me to say that they don’t exist and that they don’t affect us. Yet, we have in the past year and a half written stories that you probably would not see in publications such as China Daily. A lot of people, including us, have been surprised by this.

The connection with SUMG has helped in that they are the backers. Most media startups face the pressure of becoming profitable quickly. I can say that having that backing does relieve a little bit of those pressures so we can focus on telling great stories. We are also fortunate to have The Paper as a sister publication; it’s much larger and has stronger news-gathering abilities than we have. Still, we don’t consider ourselves to be an English-language version of The Paper.

YCW: It’s been more than a year since Sixth Tone was launched, to what extent has the website turned out as expected? Have there been any challenges that neither you nor your colleagues expected?

CM: I would say without a doubt it has turned out much better than we expected. We’ve received a lot of positive feedback. In June, we won five Society of Publishers in Asia Awards, including two for editorial excellence. I tell my team that was just the first year. Slap on the back, great job—but now we have to really take it to the next level.

I remember the weeks leading up to launch when we spent hours fine-tuning our stories. It’s kind of amusing to recall that we only had a stock of about 20 stories and nothing after that. We’ve progressed from that situation to now where we are constantly publishing stories and have a great pipeline.

There have also been challenges. Getting 50 people from different backgrounds, cultures and professional experiences to work in tandem took a while, but we’ve come a long way in a short period of time. The vast majority of the team has picked up very quickly and things have developed much more rapidly than I had expected. Ultimately, the most surprising thing was the range of stories, some heartbreaking, others inspiring. It’s been a privilege to tell and to share them on our platform.

YCW: How do your previous experiences as a journalist compare with your current role at Sixth Tone?

CM: Even though I am Irish, I have a strong background in American journalism, first at graduate school at Columbia, and later at the Far Eastern Economic Review and Wall Street Journal. It’s been my mission to bring international standards and ethics to Sixth Tone. Reporting in China presents a lot of challenges that one would perhaps not encounter in the U.S. On a day-to-day basis, implementing that has definitely been challenging and very much a learning experience for everybody. Not a week goes by without me referring someone to our guidelines on ethics and standards. Usually it concerns sourcing—many people in China are reluctant to give their names in interviews, something that we almost always require. I‘m working with the writers to make sure that we explain to the people involved why we need to have their full names and to try as much as possible to get their cooperation. We are very keen to show our readers we go out of our way to make sure that we bring reliable insights.

YCW: What earlier stories or experiences most shape your view of China today? Have you recently changed your mind about an issue, idea or theme in China?

CM: I’ve learned the most about China working at Sixth Tone because I’m surrounded by Chinese colleagues and we are in the same building as The Paper. If you want to talk about immersion, that’s it! I only got to experience less well-known parts of China after joining Sixth Tone. One of my first stories was about the largest hospital in China, which required me to go to Zhengzhou, the capital of Henan. That province fascinates me because it’s hardly ever mentioned in foreign media, but it has an enormous population.

Most recently, I was part of the team that traveled across China as part of the Hu Line series. Along the way we only stopped in one major Chinese city: Chengdu. In previous visits to Chengdu, I’d always felt a sense of excitement about visiting this town, which in my eyes was on the western frontier of China and somewhat exotic. But after being on the road in rural China for weeks, I felt my perspective had changed while approaching Chengdu. It looked like many other cities in eastern China and the prospect of having our clothes laundered and sneaking a drink at Starbucks was something we were all looking forward to! It was almost as if I was entering China through another door. It’s a small thing, but it also helped me to learn how different people in different parts of the country look at issues differently. In terms of the east-west divide that the Hu Line highlights, one person’s “development” is another’s “encroaching urbanization.”