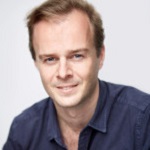 Dinny McMahon spent 10 years as a financial journalist in China, including six years in Beijing at The Wall Street Journal and four years with Dow Jones Newswires in Shanghai, where he also contributed to the Far Eastern Economic Review. In 2015, he left China to take up a fellowship at the Woodrow Wilson International Center for Scholars, a think tank in Washington, DC, where he wrote “China’s Great Wall of Debt.” Dinny is an Australian who currently lives in Chicago, where he works at MacroPolo, a think tank focused on Chinese
economic issues.

Young China Watchers (YCW): Your new book, “China’s Great Wall of Debt,” thoroughly explores the issue of debt in China. How did you come to focus specifically on debt as a serious problem for China?

Dinny McMahon (DM): There was no one moment. It was more of a creeping realization, albeit one that started from the very start of my time at The Wall Street Journal (WSJ). The second story that I wrote for WSJ was about how Chinese banks were using trust companies to hide loans off-balance sheet. This was at a time that the term ‘shadow banking’ had yet to be applied to China and, coming in the immediate wake of the global financial crisis, China’s financial system seemed among the most robust in the world.

“China’s Great Wall of Debt” isn’t supposed to be a book about debt; it’s a book about the mechanics of China’s political economy, and how they come together to allow the rapid accumulation of debt to go unchecked for so long.

Over the ensuing years, keeping track of China’s ballooning debt and the ways banks tried to hide it became an important part of my coverage. But I also became interested just how that debt was being used, and why it was possible for the borrowing to continue increasing so rapidly seemingly without any consequences. And so, to fill in the picture I started reporting on local government finances, ghost cities, industrial overcapacity, and asset bubbles. Gradually it became clear to me that debt was the thread through which I could tell the story of the Chinese economy. “China’s Great Wall of Debt” isn’t supposed to be a book about debt; it’s a book about the mechanics of China’s political economy, and how they come together to allow the rapid accumulation of debt to go unchecked for so long.

YCW: How do different contingents view debt in China? How do the views of central bankers, local Party leaders, Western economists, corporate leaders, or others diverge?

DM: These days, I don’t think there is any divergence on the question of whether the debt poses a real risk to economic stability. Chinese officials and academics warn that if debt isn’t brought under control it could result in financial contagion. A number of foreign central bankers and multilateral institutions like the International Monetary Fund and the Bank for International Settlements have been making similar warnings as well.

I’m of the opinion that while, yes, China’s authorities have more tools than most governments for managing financial sector risk, foreign observers tend to assume that Beijing can apply those tools however they see fit.

Where opinions diverge is over whether China’s leadership is capable of managing those risks in a way that allows fast growth to continue without any disruption, whether that be a financial crisis, a recession, a precipitous slowdown, or something else. Some people argue that the degree of state control Beijing exerts over the economy gives it a much broader set of options for dealing with financial risk, and so there is nothing to worry about. Others believe that the economic forces arrayed against China are too great to simply be regulated or administered away.

I’m of the opinion that while, yes, China’s authorities have more tools than most governments for managing financial sector risk, foreign observers tend to assume that Beijing can apply those tools however they see fit. My concern is that the complexity of China’s internal political dynamics—between levels of government, between branches of the bureaucracy, and between industry and the state—massively undermines the ability of well-intentioned technocrats to impose the right solution, at the right time, and in a way that will ensure success.

YCW: Some economists question the seriousness of China’s debt problem because external debt is low and most debt is government-owned. How do you respond to that viewpoint?

DM: Unquestionably, those factors mean that China is safe from some of the forces that have wrought havoc in other emerging market economies. However, that doesn’t mean China doesn’t face other challenges. For example, the advantage of China having most of its debt denominated in Yuan is that bad debts and associated liquidity problems can always be papered over by the central bank printing more money—something that economies with significant foreign currency exposures can’t resort to. And that’s what the People’s Bank of China (PBOC) has been doing. Of course, printing money should result in currency depreciation, something that the PBOC guards against by preventing money from leaving the country freely. But that results in asset bubbles as all the newly created money tries to find somewhere that will generate a return.

This great ball of money is constantly rolling around the economy inflating stock, property, bond, and commodity prices in turn. When those bubble deflate, the central bank provides more liquidity to ensure there’s no significant financial disruption. The question is: How long can this cycle continue? It’s clearly not healthy and economic history would suggest it’s unsustainable. Hence the open question is: How does it end?

YCW: China has recently committed to opening its domestic markets to the world with an emphasis on the financial sector. How seriously do you take these commitments? How do you see it affecting China’s issues with debt?

DM: We can only wait and see. Under the terms of China’s accession to the World Trade Organization (WTO), foreign financial companies expected to be given far more freedom to compete in China’s financial markets than they were subsequently granted. The way Beijing crafted its financial regulations complied with the letter of the WTO laws, but not so much the spirit.

However, things are significantly different now. China’s inexperienced and underdeveloped banks and insurance companies would have struggled to compete against more sophisticated foreign firms 15 years ago, but today China’s banks and insurers are among the biggest in the world. Foreign banks account for less than 2% of total assets in China’s banking system, and it’s hard to imagine that, given more freedom, they would be able to shift the balance significantly. Foreign financial institutions don’t pose a threat to the dominance of their Chinese rivals which makes this an opportune moment for Beijing to earnestly open the door to foreign competition. At the same time, the business environment for foreign companies operating in China has been getting more difficult in recent years, and under President Xi Jinping the role of both the state and Party in the economy has been on the rise. Given these competing forces, it’s too early to say whether China will meaningfully open its financial markets to foreign firms. We just have to wait and see.

YCW: Your book discusses at length the opacity of the China’s economic system. What advice do you have for those trying to keep track of China’s debt issues and the progress of its deleveraging process? What specific statistics or information sources do you find essential?

DM: Keeping track of China’s debt level is so difficult because the key things to watch keep changing. Starting from 2009, the defining characteristic of China’s financial system was that in response to each of Beijing’s efforts to rein in excessive risk taking, financial institutions would come up with creative new ways to get around the rules. Over the last 18 months or so the dynamic has changed. Xi has thrown his authority behind efforts to rein in financial risk and the regulators have notched up some wins. That doesn’t mean that money no longer flows around the economy in new and unexpected ways.

In my experience it always pays to be wary when you hear people declaring that the authorities have managed to bring some aspect of the financial system under control. It usually takes about a year before it starts to become clear how the financial system has evolved to adapt to its new circumstances.

YCW: This is your first book after many years as a journalist in China. What did you learn while writing the book, whether through conversations or your trips throughout China, that you wouldn’t have learned as a reporter?

DM: Let me answer that this way: Newspaper journalists are constantly working on new stories. Most of those stories are fairly short and are in response to the news of the day. When we get the chance to write a long, deeply reported feature, we’re typically limited to less than 2,000 words, which constrains the scope of reporting and the breadth of argument.

When I left WSJ to work on the book, I had a general sense of how the various feature stories I’d worked on linked together, but I had never had the time to do the research necessary to help me pull the various strands together such that a bunch of disparate stories could form something like a coherent whole. Much of the time spent on the book was spent reading and thinking in order to fill in the gaps in my understanding of how China works. Put another way, writing the book gave me the time to make sense of much of what I’d seen as a journalist.