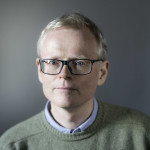 Bio: Ian Johnson is a Pulitzer-Prize winning writer focusing on society, religion, and history. He currently writes for the The New York Times, The New York Review of Books and other publications. He is the author of multiple books on China including “Wild Grass” (2004) and “The Souls of China: The Return of Religion After Mao” (2017).

Young China Watchers (YCW): How did you come to develop an interest in China? What drew you towards studying religion in China?

I grew up in a fairly religious household as Protestant Christian. When I came to China in 1984 as part of a language-exchange program in college, I was interested in what Chinese people believed. At the time, it felt like that there was no belief! One of the first places I went to was the White Cloud Temple (白云观 ) because I wanted to explore China’s indigenous religion which is Taoism. When I went there in 1984, it was really small, much smaller than it is today. This was of course just eight years after the Cultural Revolution and many temples, churches and mosques had been destroyed. There seemed to be little visible religious life.

I realized that that I had misunderstood the situation when I came back to China in the 1990s. There was a big movement throughout the 1990s called the Qigong Fever (气功热). People were searching for something. The main religions in China were handicapped and not allowed to proselytize, but Qigong was defined as a kind of Wushu (武术) and so it was allowed to proselytize. People went to parks and they handed out material and there were many groups that did this in the 1990s. There was a huge, vibrant spiritual life going on.

“I think what really moves a person is this search for values. In this sense, China is part of a global conversation that we’re having about what our societies are made up of.”

YCW: When you started your new book, “The Souls of China: The Return of Religion After Mao”, what were you aiming to achieve? Any particular reasons why you chose to explore religion in post-Mao China?

IJ: This debate about religion in society has been going on in China for a century. People in the late Qing dynasty thought of religion as backwards, and in 1898 there was a movement to get rid of temples and turn them into schools. That was the backstory of what’s happening in contemporary Chinese society.

A key takeaway from my book is that religion and the search for values are moving back to the center of a national discussion in China. We tend to view China in stereotypical forms like as the “factory of the world” or perhaps through its political dissidents and the fight for freedom of speech. However, I think what really moves a person is this search for values. In this sense, China is part of a global conversation that we’re having about what our societies are made up of. Over the past 30 or 40 years, economic development has been viewed as a priority but I think we see that in many countries around the world, this is not enough.

“In a way, you can say that the return of religion in the 80’s, 90’s and early 2000s was a return to normal religiosity that you would find in any country. But I think the special thing about China is that there was a premium on economic development.”

There are many examples in education. Many Chinese parents are dissatisfied with the public education system. They feel it’s too hierarchical, too test-oriented and that it doesn’t impart values on its students so they send their children to alternative education systems. Some of these alternatives are very traditional and run along Confucian lines. Some are also Western systems like Montessori or Waldorf. Yet all of them have a shared idea that you have to teach children values.

Many Chinese people are spending time finding their personal masters or shifu (师父). Some of it is explicitly religious like going to a temple and finding a Taoist or Buddhist master to study under. Some of it is not explicitly religious, but involves activities with a spiritual component like calligraphy. Another example would be the human rights (维权) lawyers, who are disproportionately influenced by religion. Not everyone becomes a human rights lawyer because they join a religious group, but it is maybe one extreme example that is influenced by the social conscience of religion.

YCW: In recent years, the idea that a “moral vacuum” has developed in China has taken hold. Do you agree? Do you think this idea came about primarily because of an intense focus on economic development or a fear of organized religion challenging the government?

IJ: There was some sort of a spiritual vacuum. In a way, you can say that the return of religion in the 80’s, 90’s and early 2000s was a return to normal religiosity that you would find in any country. But I think the special thing about China is that there was a premium on economic development. China wanted to solve the basic problems that all people face in housing, food, and clothing. Once you’ve solved those problems then you’re faced with the eternal questions that all societies face: Why are we here? What makes us human? What makes us special? What do we believe in? I think those questions have come to the fore.

Chinese society, historically, has been defined by these questions. Philosophers like Confucius have always defined society as a moral society. The legalist might argue that you just need laws and to enforce them and that would be enough. But figures like Confucius have maintained that you need moral values as well. People are searching for that and it has become an important trend in society.

YCW: At the risk of over-simplifying an extremely complex issue, how would you characterize China’s policy towards religion given the obvious contradictions with Marxism?

IJ: There is a small minority of people in China who are still Marxist. I think the Communist Party overall is communist in name primarily; it is fairly pragmatic. Xi Jinping has gone to Qufu (曲阜) to the home of Confucius, picked up the analects of Confucius and said that this was something that he could learn a lot from. At UNESCO in Paris he spoke very favorably of Buddhism and he has met many Buddhist leaders. In my upcoming book, I look back at Xi’s history and, over the years, he has clearly had a favorable view of religion. I don’t mean that he himself is religious, but that he views it as a part of society that is acceptable and maybe even helpful to the Communist Party. His first posting after the Cultural Revolution in 1982 was to a small town in Hebei province called Zhengding (正定). In Zhengding, Xi struck an alliance with a Buddhist monk who was running a temple and he supported it quite strongly. He has probably been sympathetic to religion for quite some time. His father (Xi Zhongxun) was also quite sympathetic to religious groups. He wrote the obituary to the Panchen Lama and he was in charge of religious affairs after the Cultural Revolution.

It’s hard to say what comes next and my book is not very predictive. There are some changes that you can see happening now. Economic growth used to be the Communist Party’s main claim to legitimization. Now, although China is not becoming poorer, it is not becoming wealthier as quickly. Religion, traditional values and traditional culture are part of an effort to appease people. They give people something else to believe in besides economic growth. One potential outcome is the use where leaders in Chinas embrace religion as a way to legitimize their rule. This approach is similar to Vladimir Putin’s in Russia. However, comparing the situation in Russia to China is flawed for two reasons. First, the Russian government is in a much weaker position so it needs religion to legitimize itself. Second, handling religious diversity in Russia is relatively easy since you mainly have the Orthodox Church and Islam. China, by contrast, has more religious diversity. The Communist Party feels more comfortable with the traditional religions of Buddhism and Taoism, and less comfortable with Christianity and Islam. That could lead to tensions in the future if they bias one religion over the other.

YCW: How does the role of religion in society in China compare to that of its neighbors, such as Japan and Korea?

IJ: There’s an interesting comparison with Taiwan: After the civil war, Chiang Kai-shek was very pro-American and gave complete freedom to missionaries to proselytize Christianity. Yet only 3-5 percent of Taiwanese are Christian. The traditional religious landscape had remained intact; temples were not destroyed because there was no Cultural Revolution. People could keep their faith. The same could be said of Japan. In China, Christianity is growing faster because of the destruction of the Cultural Revolution.

I think the main difference is that Japan and Korea did not go through a huge anti-religious campaign over the past century. In China, “modernization” over the past century was really a traumatic experience. It has caused people to be skeptical of traditional religions. In Japan, they created a traditional religion called Shinto, which didn’t really exist under that name before. Modernization was more on its own terms through the Meiji Restoration in the 19th century; there was less of an attack on traditional Japanese culture and religion. In China, there was a sense of insecurity and being attacked by the world. Therefore the whole cultural system became suspect and this included religion. It’s changing now, but this has been a century of very traumatic experiences for the Chinese people.

Tagged on: Religion    The Souls of China    Voices on China