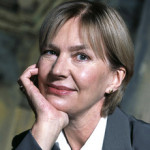 Isabel Hilton is a international journalist and broadcaster. She is the author of several books and is founder and editor of chinadialogue.net, a non-profit, bilingual online publication on the environment and climate change. She studied at Beijing Foreign Language and Culture University and at Fudan University in Shanghai, before taking up a career in written and broadcast journalism working for The Sunday Times, The Independent, The Guardian, The New Yorker, and the BBC. Hilton holds two honorary doctorates and was awarded the OBE for her work in raising environmental awareness in China.

Young China Watchers (YCW): You started out studying Chinese language and literature and travelled to China for the first time in the early 1970s. Can you tell us about your first experiences in China?

Isabel Hilton (IH): To those who know Beijing today, it’s quite hard to convey what it was like in those days. Essentially, it all closed down at 8 o’ clock. It was much smaller; there were no high-rise buildings, and it was extremely quiet. There were no private cars and no telephones. A lot of it was about what wasn’t there: no restaurants, no cafes, no bars at all—and almost no foreigners. There was enormous curiosity when people saw any foreigner on the street or on a bike or doing anything remotely normal. Large crowds would gather very quickly to look at you and comment about what you were wearing and what you looked like. Most people were afraid to speak to you because this was still the Cultural Revolution and it was pretty dangerous to be seen to have a relationship with foreigners.

I was studying literature, but very little was available. We studied model opera, Jiang Qing’s (江青) literary theory, and Lu Xun (鲁迅). That was pretty much all that was allowed. It was very politicized. On the upside, we got out of the classroom and worked in factories, communes, and state farms. If you know a later China, it is very hard to understand how restricted life was for both foreigners and Chinese.

YCW: From this experience and your career in journalism, including serving as a correspondent in Latin America, what sparked the shift to the environment and sustainability?

IH: I spent most of my career covering international politics in various forms and in various places: Latin America in the 1980s; the fall of the Berlin Wall and the end of the Soviet domination of Central and Eastern Europe; and South Asia, India, Pakistan, and Kashmir. All of that work was extremely compelling but I wasn’t working a lot on China and China was changing very quickly. I only returned regularly starting in1989, just after Tiananmen. Through the reform period it began to be possible to tell different stories about China. Previously, journalists were very restricted and had to guess what was inside the black box. As China opened up to the world, all kinds of things became possible.

Chinadialogue came together with the combination of China’s reform period and the arrival of the digital age. Suddenly ordinary people could communicate more easily. I started looking at the existing barriers to communication: language, inexperience, and a lack of understanding on both sides. Many people’s lives outside of China were being affected by China in ways that they didn’t know about or understand; at that point, Chinese people still didn’t travel very much. I was looking for a conversation that we could all have about something that really mattered and mattered equally to everybody. For example, climate change and China’s environmental crisis have profound impacts on China but also on the rest of the world. We wanted to build a dialogue around these topics, engage in knowledge-sharing, and help people understand things to which they had no other access. The aim was to get people interested in very complex long-wave events that also demand immediate action. So then I had to learn about climate change. The more I learned, the more important it seemed to me. It’s still important to me.

YCW: Chinadialogue started in 2006, pioneering web-based environmental information. How has the use of such news platforms changed over the last 10 years in China and abroad?

IH: When we began in 2006, people outside China were eager to better understand China and Chinese were eager for access to information that was difficult to find or that wasn’t in Chinese. The official attitude in Beijing was to develop first and clean up later. The environment was a fringe concern. Government policy now acknowledges the mistakes of the first 30 years because the consequences are inescapable and unavoidable. People have more access to all kinds of information. But as we know, this is a tug-of-war with the government and the Party. Positive developments include regulation of access to information and openness about basic data, including air pollution. But at the same time the government has, particularly in the last two years, returned to the idea of guiding public opinion and controlling the message. How people access information is partly determined by what the government allows and how they can get around restrictions. Suspicion about information from other sources has probably increased and positions on both sides are a little harder than before, but it is still perfectly possible to have a reasonable conversation.

YCW: Chinadialogue is the only completely bilingual website on environmental issues, engaging users through comment sections which are also translated. How has your audience changed since the site’s inception? What kind of impact have these online conversations had offline?

IH: We have noticed a development in the way that people use online information. When we began, people would have their conversations on the website. But these days we have as many readers off the website—in fact more readers do not go directly to the website, partly because of syndication and networking. The arrival of social media changed things quite radically. People now both read and comment on social media. The conversations we used to have on the website are now taking place elsewhere.

We survey our readers every year because it is very hard to measure our impact offline. We ask our readers if we are being useful in that regard and get very strong feedback. A high proportion of readers report that Chinadiaolgue has changed the way they think or that they have used what they’ve learned on Chinadialogue to persuade others. We hope that also applies to policymakers and to other journalists. Another key influence we’ve had is on other media. We have helped shape and define the environment as a very important issue for China. Certainly, when we started it wasn’t that way.

YCW: The environment is receiving increased attention by the Chinese government. Air pollution and disasters such as the chemical warehouse explosion in Tianjin last year or the oil pipeline explosion in Qingdao in 2013 are in the global eye. What are the environmental issues facing China that have not yet sparked public interest?

IH: Environmental concerns have moved from the fringe and are now mainstream in China. The government is aware of high-level public concern, but there is also an opening for new opportunities. China’s model of development is unsustainable. As it enters the next phase of development, it seeks higher technology opportunities such as low-carbon development and electric vehicles. High proportions of the technologies supported in the 12th and 13th Five Year Plans relate to building a more sustainable society.

There are, however, outstanding issues that are very difficult to resolve. I would highlight water scarcity and soil pollution. Both will require greater access, greater accountability, and greater transparency on data, results, and methodologies. Three years ago soil pollution was essentially a state secret and large, important parts of that data are still secret. Soil pollution has implications for China’s food security and food safety, which again are hot-button topics in China. Equally as contentious are water issues—the developments in the massive urbanization in north China and the competition between energy, food, and urban demand for water is bringing China’s water supplies to the breaking point. A lot could be done: using less water, rationally allocating water to different sectors, or cutting back on coal, which uses a disproportionate amount of water. But these are quite big decisions and given the urgency, I am not sure that what we are seeing right now is as much as we should be seeing.

YCW: Over the course of your career, you have built up vast expertise and are regularly asked to comment on current Chinese affairs in international media. What advice can you give to young China watchers that are trying to establish themselves as opinion-shapers in their communities?

IH: The thing about China is that in a way, no one is an expert. You never stop learning and China never stops surprising. The key bits of advice are to never stop learning and never stop listening. Opinions, views, and understanding are always more robust if they are open to challenge. We tend to huddle in our tribes, particularly in this digital age, and we should always be prepared to take on people who disagree or who want to argue. That is very healthy, particularly with societies and politics as complex as those in China. One can go on an entire lifetime and continue to learn the entire time. So stay flexible, stay interested, keep enjoying it, and remember that listening is as important as talking—that is how dialogue happens.

Voices on China – Isabel Hilton: Founder and Editor of chinadialogue