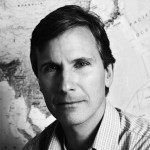 John Pomfret is an award-winning journalist who spent two decades as a foreign correspondent for the Washington Post. He was bureau chief in Beijing and a senior diplomatic correspondent in Washington. He is also an author, whose books include Chinese Lessons: Five Classmates and the Story of the New China and The Beautiful Country and the Middle Kingdom: America and China, 1776 to the Present. Pomfret is fluent in Mandarin, and was awarded the 2003 Osborne Elliot Award for the best coverage of Asia by the Asia Society, the 2007 Shorenstein Award from Harvard and Stanford universities for lifetime coverage of Asia, and the 2010 Edward Weintal Prize from Georgetown University for Diplomatic Reporting.

Young China Watchers (YCW): Congratulations on your new book, The Beautiful Country and the Middle Kingdom: America and China, 1776 to the Present. I imagine it took many years to perform the research, translate documents and distill insight for a mainstream audience. Can you tell us about the impetus for writing the book, and your thoughts on releasing it at a moment of potential turbulence in the Sino-U.S. relationship?

John Pomfret (JP): The timing of the book’s release was purely coincidental. I would have loved to have gotten it done a year, even two years earlier. But the research and the writing took a really long time—six years in all. So, it’s kind of lucky that it came out a what looks to be an inflection point in U.S.-China relations. My initial impetus for writing the book was pretty simple: I felt the U.S. public (and the Chinese public as well) had been ill-served by the story we told ourselves about the relationship—from the early days, through the latter part of the 19th century, and WWII onto the present-day. The American side of the story was often somewhat apologetic while the Chinese (read: state-run) view of U.S.-China relations was overly negative about America’s influence on China, in contrast to the view of average Chinese which was generally quite positive.

YCW: One of the most surprising revelations is the depth of Sino-U.S. relations prior to China’s 改革开放 (reform and opening up) project from 1978 to mid-2000s. Many of these connections were forged by U.S. missionaries and entrepreneurs and Chinese foreign students. How would you characterize the civilian links between China and the U.S. today?

JP: Some of the trends that were started in the 19th century continue today, such as the enormously rich scientific cooperation between Americans and Chinese and the role Chinese immigrants continue to play in the building of the United States. Others, such as the involvement of Americans in efforts to reform China’s political system have weakened, as a result of increased vigilance against such influence by the authorities in China.

YCW: If you were to put your book in the hands of a Chinese historian, what might that person find surprising, challenging or even downright untrue inside the book?

In addition, I think Chinese readers would be surprised at the extent of China’s influence on the U.S., that the first American fortunes were made in the China trade and that Chinese were involved in some of the most important 19th-century civil rights court cases in U.S. history that laid the foundation for a series of civil rights-related court cases in the 1950s and 1960s.

YCW: We recently experienced a moment of stark juxtaposition: While U.S. President Donald Trump extolled his “America first” plan at his inauguration ceremony in Washington, DC, Chinese President Xi Jinping promoted “economic globalization” as an unstoppable force in Davos. In your view, how much of their respective policies are political rhetoric, and how much will they translate into real policy outcomes?

JP: We’re still at a very early stage in the Trump administration’s China policy, however, it’s already clear that China is seeking to profit from the apparent inward turning of a Trump presidency. Xi Jinping’s speech in Davos was clearly timed to highlight the stark contrast between his vision and that of Trump’s. However, it was somewhat cynical considering China has pursued a highly mercantilist policy for years. As for where Trump is going to take U.S.-China relations, it’s still very unclear. But, like many of his predecessors in the White House, he is already pivoting away from his campaign pledges—to slap tariffs on Chinese goods and to label China a currency manipulator.

YCW: You spent 20 years as a Washington Post journalist, many of which were spent covering China. How have you seen Chinese perceptions of America and US power in the world change over the course of your career? Based on your historical research, what time period do you think most closely resembles what we are seeing now between China and the U.S.?

JP: When Chinese first came to the U.S. in the 1970s and 1980s they were amazed by America’s modernization. Chinese poets on cross-country plane rides waxed rhapsodic about all the lights below. America moved in cars, they noted, while the Chinese walked. Obviously all that has changed in the half-century during which America and China have rediscovered each other. Now, Chinese come to America and note that it moves far more slowly than China. When the 2nd Avenue subway line opened in NYC, it was greeted with the digital version of a Bronx cheer in China. For the price of that line, and the time it took to build it, Chinese netizens noted, China had built full subway lines in a dozen cities.

Still, Chinese continue to express respect for the U.S.; their focus these days is on American values, more than American stuff. I don’t think there’s actually been a time period in U.S.-China relations that quite parallels that of today, partially because China is much stronger than before and partially because the world is so much more deeply interconnected.

YCW: Many of us in the young generation of China-watchers have been told that the Sino-U.S. relationship is the most important bilateral relationship to shape international relations to come. Do you believe this holds true? Are there more creative ways to steer this relationship in positive directions beyond track-two dialogues?

JP: The Sino-U.S. relationship is the most important bilateral relationship, however, it often gets short shrift because of all the other immediate crises (the Middle East, Russia, U.S. domestic issues) that demand policymakers’ attention. Track-two dialogues are actually really important. But people-to-people contacts are, too. The challenge is to create a safe space where Americans and Chinese can work and speak together honestly; that has been enormously difficult in part mostly because of paranoia on China’s side but also because Americans sometimes enter the dialogue with an unwarranted sense of superiority.

Voices on China – John Pomfret: Journalist and Author of The Beautiful Country and the Middle Kingdom