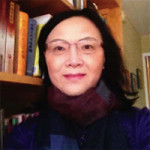 Li-Hua Ying directs the Chinese Program and teaches a wide range of courses on Chinese language, literature, and culture (including Chinese calligraphy) at Bard College in New York. Among her publications are “Negotiating with the Past: The Art of Calligraphy in Post-Mao China,” “Vital Margins: Frontier Poetics and Landscape of Ethnic Identity,” and “Historical Dictionary of Modern Chinese Literature.” She served for many years as the Executive Director of American Society of Shufa Calligraphy Education, promoting the teaching of Chinese Calligraphy in the U.S.

Young China Watchers (YCW): Calligraphy is an art form in cultures throughout the world. What makes Chinese calligraphy unique? More specifically, what distinguishes it from other forms of calligraphy in East Asia?

YCW: Was Mao a good calligrapher? What do you think of his work?

LHY: Mao indeed was noted for his calligraphic artistry. It’s hard to objectively judge a person’s calligraphy and say whether a certain piece is worth $10,000 or worth nothing. It’s very subjective. We have enough eccentric calligraphers that are exceptionally famous and their works are treasured—but for a time their work might not have been. Mao had a style of his own—but is it universally praised? Probably not.

In President Xi Jinping’s anti-corruption campaign, some calligraphers who held top positions at the various levels of calligraphers’ associations have been found to be corrupt. The structure of the organizations is similar to that of the government and since corruption was rampant in government, calligraphers’ associations were no exception. If a calligrapher became chairman of an association, he could sell his work at a good price. The position could be converted to money. But does that mean that every chairman of an association is an excellent calligrapher? Often not. If one’s obviously poor calligraphy fetches a high price, simply because of one’s official title, that’s corruption. That is also why calligraphy by politicians and celebrities is sought after. Emperor Qianlong left his “ink treasure,” that is his calligraphy, everywhere he went, Mao Zedong’s is ubiquitous, Jiang Zemin’s can be easily spotted, etc. So if you are a high-ranking official, you would most likely practice calligraphy so that you are asked to leave some “ink treasures” behind, they would be presentable, not becoming a laughingstock. But if you are a disgraced politician, your calligraphy that was once proudly displayed on a university’s front entrance would be taken down the minute you fell from your high pedestal, even if your calligraphy ranked among the best. If you go to China and you see Mao’s calligraphy all over the country, then you know for sure that Mao’s position is not shaken and that he still “rules”.
YCW: During his rule, Mao upended Chinese art and culture. How was Chinese art, including calligraphy, affected during that period?

LHY: During the Mao era, calligraphy was so closely connected to political propaganda, largely because of the big character posters and slogans written on walls everywhere. Even though people still practiced calligraphy and good handwriting still earned respect, it was less about personal fulfillment. There were no calligraphy contests to encourage competition, and no emphasis placed on learning about the history behind the mater calligraphers whose work was used as samples for copying and practicing.

But in the post-Mao era, the focus has shifted to individuals and their interactions with art and history. It has become more inward-looking: “I do it because I like it, it makes me calm. It gives me a sense of accomplishment.” With economic development and people retiring early, people have lots of free time, so what do they do? They look for pastimes like public square dancing, traditional musical instruments like guzhen or guqin, tea ceremony, painting, calligraphy, and similar activities. When all the attention was on class struggle (as it was during the Mao era), it was hard—if not impossible—to nourish your own artistic needs. While guzheng and guqin are also very popular today, it’s a lot harder to learn to play an instrument than it is to learn to write calligraphy. And it’s also an inexpensive hobby- calligraphy tools don’t cost a lot. All this makes calligraphy more accessible, which increases its popularity.
YCW: China’s culture often encapsulates a pride in the nation’s history and a commitment to future development. How would you say the modern practice of calligraphy is or is not an example of this tension?

LHY: The popularity of calligraphy is part of the revival of culture as a movement. As you practice your calligraphy you’re reviewing your national history. When you’re copying ancient masters, you look at their lives, their backgrounds, and their writing—prose and poetry. History has given us a lot of great masters and masterpieces. At present, the tug-of-war between the past and the future is most evident in the debates about the direction (or even the definition) of calligraphy. On the one hand, the modern or avant-garde calligraphers—often teachers and students in art institutions—promote innovation and revolution in their attempts to move calligraphy beyond its ancient roots. Besides these “art calligraphers,” there are many other “experimentalists”; the most outrageous among them masquerade themselves as calligraphers by “writing” with cleavers, their beards and hair, etc. On the other hand, the traditionalists, who are found in every corner of the country, insist on adhering to ancient practices. I’m more of a traditionalist than a modernist, believing in limiting the definition of calligraphy to the age-old practice of brush writing. I’m aware that calligraphy faces many challenges and its future is uncertain. But one thing I’m sure of is that it will not disappear. It may not be popular but it will not die. It’s in the Chinese DNA. The calligraphic lines are like umbilical cord linking the past, present, and future of Chinese civilization.
YCW: In the past decade the Chinese government has been going back and forth between looking forward and looking back—the re-introduction of Tomb Sweeping Day as a national holiday in 2008 and the controversy over the statue of Confucius in Tiananmen Square in 2011 are two examples. How have attitudes about and practices of calligraphy changed during the last ten years? Has it been co-opted for political purposes, or does it largely remain an artistic pursuit?

LHY: Calligraphy itself is non-political. It only becomes political when people use it for political purposes. Most practitioners treat it as a hobby or a method of self-cultivation. Its popularity may have something to do with the economic gains achieved since the reform. People are no longer starving; they have time and means to pursue their hobbies. People are still young when they retire (usually between 55–60) and are full of energy. Everyone knows how to write characters, so calligraphy is not hard to learn. It’s also relatively inexpensive. The bar to enter is low, as I said earlier.

LHY: In the past, when brush writing was routine and writing a good hand was expected of all who were educated, nearly every political statement was written with brush and ink. But in modern times, calligraphy is no longer used for daily communication. When calligraphy is divorced from daily use and becomes a form of art, its practical function is limited commercial advertising and to political propaganda or protests. In the latter situations, the focus is on the message conveyed in the writing, not the writing itself. It is used because impressive calligraphy is more likely to attract attention.

In more recent history, calligraphy played an important role in politics during the so-called April Fifth Movement. After the death of Premier Zhou Enlai on January 8, 1976, a political protest erupted and people risked their lives to congregate in Tian’anmen Square in Beijing. Starting March 30, they began to place memorial wreaths and poems in the square, and the crowd swelled on April 4, which happened to be Qingming Festival—a day for remembering the dead. People used the occasion to vent their frustration over how the country was run by Mao’s political cronies. Big posters bearing poems with veiled political messages written in calligraphy were on display, viewed, copied, and later distributed all over the country.

Today, characters written with brush appear in street protests and demonstrations, but they are often poorly written with apparently no aesthetic considerations. The difference, of course, has to do with the nature of these protests and the composition of the participants. While the 1976 movement involved intellectuals, the more recent protests are often organized by people at the bottom of the socioeconomic ladder.