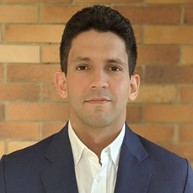 Parsifal D’Sola Alvarado is the founder and CEO of the Andrés Bello Foundation, a non-profit organization that studies China’s influence in Latin America and the Caribbean. Since 2019, he has also served as a foreign policy advisor for Venezuelan opposition leader Juan Guaidó. He earned a bachelor’s degree in telecommunications engineering from the Universidad Católica Andrés Bello and master’s degrees in East Asian studies from Columbia University and in international politics from London University.

Parsifal D’Sola Alvarado (PDA): When you see Latin America and Africa, you have a lot of similarities in problems that plague both regions in terms of economics, politics, and social issues. But when we’re talking about the Global South, people tend to put all the countries or all the different regions into the same package. In Latin America, even though there is a lot of diversity, it’s a more unified region in terms of language, culture, and political history than Africa, and that does play a role in the relations that both regions have with China. Talking about China’s approach to both regions in terms of investment and public diplomacy, you have access to natural resources, access and development of new markets, and support for Chinese policies in international forums. Those are the three basic tenets of China’s relationship with the countries of both regions.

In both regions, you see large investments in the extraction industry, in the development of infrastructure, particularly the kind of infrastructure that facilitates access to or exploitation of natural resources. What China seeks in exchange in political terms tends to be support for Chinese policies in international forums, not only support for policies, but also an avoidance of criticism of Chinese policies that tend to be criticized, for instance the cases of Hong Kong, Taiwan, the South China Sea, the internment camps of Uyghurs in Xinjiang, etc.

Disparities have to do mostly with the way that China deals with each particular government in Africa and Latin America. China in Latin America has tended to push for state-to-state personal relationships, like Hu Jintao and now Xi Jinping created with Hugo Chávez and his successor Nicolás Maduro in Venezuela. It has tried to push for the same kind of relationship with other countries, seeking close relationships with certain political figures in elite political circles in the different countries. Given that Latin America is much more stable politically and economically — in comparison with Africa, where there are a lot more dictators and state-driven policies — it’s much easier for China to deal with different countries in Africa. This is because they can deal directly with authorities instead of having to go through, let’s say, a national congress or parliament for approval for investment, like in a lot of cases in Latin America.

YCW: A Brookings report notes that before 2016 the Chinese strategy for investment in Latin America focused on countries rich in resources, disregarding the risks of weak governance. The author believes that issuing loans without apprehension to creditworthiness came from relative institutional inexperience. He then argues that China’s approach to foreign direct investment has changed as a result of the failure of projects in Venezuela and is now moving toward alignment with international lending standards. Do you agree with the Brookings evaluation of Chinese investment strategy in Latin America?

PDA: I know the paper you’re referring to. I totally agree. I think given the great failure the Venezuelan case study presented for China, it was an important lesson for China in terms of how to deal with countries in the region. Not only in the region, but I think globally as well because, basically, they have nothing to show after 20 years of close relations with Venezuela. After the boom of the late 2000s, particularly with Chávez and the oil boom in the political equation, you see that loans to the region from China decreased dramatically after 2015.

“While China has commented on Venezuela’s current crisis, they have tried to stay as far away as possible from it… They don’t want Chinese policies toward Venezuela to be blamed for the current evolving crisis.”

You also see in international forums that while China has commented on Venezuela’s current crisis, they have tried to stay as far away from it as possible. That tells you that they know for a fact that this was a failed experiment. They don’t want Chinese policies toward Venezuela to be blamed for the current evolving crisis.

You do see China trying to push for engagement through regional institutions, like the Latin American Development Bank (CAF). They tried to promote development projects through the local banking industries. For example, in 2019 CAF gave $3 million to fund the feasibility study of a transoceanic optic fiber project that eventually was slashed due to political reasons. Those are formal channels that China hadn’t tried before, and they are greatly engaging through these multilateral actors.

YCW: Since the 2006 China-Africa Summit, large-scale Chinese-funded and -built infrastructure projects began to emerge. With over $143 billion in loans to Africa since 2000, the continent has welcomed millions of Chinese immigrants as laborers. Chinese is increasingly being taught as a foreign language in schools, for example in Kenya, South Africa, and Uganda. There are now approximately 48 Confucius Institutes located in Africa. Do you believe an increased Chinese language and cultural presence will also appear in Latin America?

PDA: You’re starting to see an increase in Chinese programs to the region. This probably took off two or three years ago, especially through Confucius Institutes, events, programs, and seminars promoted by the Chinese embassy in different countries. In Colombia’s case for example, during 2020 the Chinese embassy has organized tons of events. Maybe I’m exaggerating a bit, but at least once a month [they hold an event]. I participated in one a couple of weeks ago, and it was organized by the Colombia-China Chamber of Commerce, which has a direct relationship with the Chinese embassy. The Confucius Institute also participated, commemorating 40 years of relations between China and Colombia.

You see these kinds of events popping up around the region. They still do not have as far of a reach as they do in Africa. [The amount of people studying] Chinese in Latin America still remains quite low. However, the numbers are growing, primarily through Chinese government grants and scholarships for Latin American students to go to China, not only to learn Chinese, but also to study at a higher level, such as through a master’s degree or doctoral studies.

YCW: How has Guaidó’s approach to China differed from the traditional Venezuelan government perspective?

PDA: First of all, just a quick disclosure. All of the opinions here are my own. They do not represent the Guaidó administration’s policies toward China.

Inside the Venezuelan National Assembly, the legitimate National Assembly elected in 2015, you do see different positions [on China]. There’s a Taiwan Friendship coalition in parliament that promotes closer relations with Taiwan. Given everything that’s happened in 2020, such as the pandemic and all the donations China has been promoting throughout the region, you saw a pushback from these members of parliament, even at the UN. They submitted a public letter criticizing China’s position vis-à-vis Taiwan and Hong Kong, and saying that the Venezuelan people, from their point of view, stood with democratically-free Taiwan.

It’s not about blaming China for what’s going on, even though there’s an underlying subtext saying that they didn’t contribute to Venezuela’s development, because they didn’t take into account the internal politics and economic groundwork; That if they had been paying attention, they probably wouldn’t have gotten into the mess they got into in the first place. It’s very different to what happened with Russia or Cuba, which are countries that are much more involved and have an important presence inside of Venezuela. The Chinese have mostly stuck to economic relations and stayed away from the political side of the relationship.

YCW: You mentioned that the Guaidó administration has focused on documenting Sino-Venezuelan projects undertaken during the Maduro and Chávez administrations. Would you mind clarifying that process?

PDA: The main obstacle is the lack of transparency. Many of the agreements signed first by Chávez and then by Maduro were never made public. They never went through the National Assembly. These documents are sealed from any outside view, so it is very difficult to know the clauses and responsibilities on the Chinese and Venezuelan sides. That’s proved to be a massive hurdle in terms of verifying everything that has been going on. That said, the projects (or the failed projects) are there, and the announcements were mostly headlines noting that a certain amount of dollars was taken from a Sino-Venezuelan fund for a certain project. The amounts that were supposed to be spent on these different projects are downloaded from the public domain, so you cross-reference those amounts with the results of all these projects and make the comparisons.

“Many of the agreements signed first by Chávez and then by Maduro were never made public. It is very difficult to know the clauses and responsibilities on the Chinese and Venezuelan sides.”

As an example, in 2012 there was this $1.4 billion plant in the outskirts of Caracas, which was inaugurated by Chávez. That plant was supposed to serve the entire Venezuelan market in domestic electronic appliances. To date, it has not produced one electronic appliance. The main reason is because the plant had no electricity to back it up. Eventually, the Venezuelan government owed the contractor around $700 million, and never paid them, so they left the country.

It is these kinds of case studies that you can use as a basis for analysis in terms of the amounts of money invested and the results obtained. [The research] is mostly done by journalists that go to the site and interview workers. The workers are mostly Venezuelans, but there are also a lot of Chinese that became disillusioned with these projects after having high hopes for what they were doing in Venezuela.

YCW: Are there any books, reports, or websites you recommend to learn more about Chinese investment and public diplomacy in Latin America?

PDA: Well, not to toot my own horn, but the Andrés Bello Foundation is a good place to start. That being said, there are two Latin American networks of academics. Red China Latinoamérica (China-Latin American Network) produces content in both English and Spanish. They are based in Santiago and Mexico City. Through them, you can access articles that have been published from academics in the Latin American networks. China Dialogue also publishes in both English and Spanish. Finally, the Andrés Bello Foundation recently developed an unofficial partnership with SupChina, beginning in January 2021, to publish original Spanish-language content.