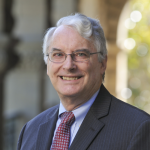 Thomas Fingar is a Shorenstein APARC Distinguished Fellow in the Freeman Spogli Institute for International Studies, Stanford University. From May 2005 to December 2008, he served as the U.S. Deputy Director of National Intelligence for Analysis and, concurrently, as chairman of the National Intelligence Council. His previous positions include assistant secretary of the State Department’s Bureau of Intelligence and Research (2004–2005), director of the Bureau’s Office of Analysis for East Asia and the Pacific (1989–1994) and chief of the China Division (1986–1989). Fingar attained his bachelor’s degree at Cornell University and a doctoral degree in political science at Stanford University.

His most recent book, “The New Great Game: China and South and Central Asia in the Era of Reform,” was published this March by Stanford University Press.

Young China Watchers (YCW): What was the angle or incident that initially drew you to study China’s international relations?

Thomas Fingar (TF): The initial spark for my interest in China’s international relations was a lecture on China’s engagement in the Korean and Vietnam wars when I was an undergraduate student at Cornell. The lecturer, John W. Lewis, who later became my thesis advisor and colleague at Stanford, was so obviously excited about his subject that I wanted to learn more.

I began to study China seriously at the beginning of the Cultural Revolution in 1966, when China’s involvement on the world stage was, to put it mildly, very different from that of other countries or textbook descriptions of international relations. In the decades since, my motivation for studying China changed from curiosity about China’s “unusual” behavior to fascination with the relationship between its quest for development and economic growth and its relations with other countries. In recent years, I have become increasingly interested in how China’s participation in the international system has transformed China and the global order.

YCW: How has China’s skill in diplomacy and statecraft evolved over the years, and how has that affected its relationships with its neighbors?

TF: I confess to being less enamored of China’s statecraft and diplomacy than are many others. The decades since 1949 have seen more minor tactical victories than significant strategic accomplishments, and it is simply a fact that China today has close, trusting relationships with no countries. The most significant strategic achievement, and it is an important one, was rapprochement and normalization of relations with the United States. Beijing has often had to play a weak hand, but one must question the wisdom of decisions that alienated the Soviet Union in the 1950s and 1960s without winning support or cooperation from the U.S.-led “free world” until the 1970s, produced sometimes fraught relations with all of China’s neighbors and major trading partners, and identified North Korea and Pakistan as the country’s closest friends.

Until the past few decades, China had very limited contact with and knowledge of countries and cultures outside of Northeast Asia and Vietnam, few incentives to develop other close ties, and viewed other countries through imperial or ideological lenses. This has changed dramatically and China is increasingly willing and able to play constructive roles in the international system. The problem, now as in the past, is that China’s diplomacy is often employed to pursue goals incompatible with the interests of other nations.

YCW: You’ve looked at how the relationships between China and the U.S., Pakistan, India, and Russia/USSR have shifted from the 1950s to today. Is it fair to characterize these players as allies or adversaries of China, or have international relations outgrown these labels?

TF: The world has changed dramatically since World War II and, especially since the end of the Cold War, it is misleading to characterize countries simply as “friends” or “enemies.” The hybrid term “frenemies” is an attempt to capture the complex and dynamic character of relations between states that are increasingly interdependent, have both shared and competing interests, and interact as uneasy partners.

During the 1950s, China was a formal ally of the Soviet Union and viewed India as a partner in the effort to shape the post-colonial international order. China viewed the U.S. as its principal enemy, and the U.S. had a formal, anti-communist alliance with Pakistan and sought closer relations with India. In the 1960s, China and India fought a border war, and U.S.-India relations became strained because the US curtailed arms sales after India’s 1965 war with Pakistan. India aligned more closely with the Soviet Union in the 1970s and 1980s, and China aligned with Pakistan because supporting Islamabad complicated India’s strategic situation. China “leaned” toward the U.S. to counterbalance the Soviet Union and to further its quest for export-led growth. In the 1980s, China cooperated with Pakistan and the U.S. to support groups fighting the Soviet occupation of Afghanistan. When the Cold War ended, China viewed India as less threatening because it was no longer tacitly allied with Moscow. China’s economic success and the demise of the Soviet “model” prompted India to undertake reforms; this both diminished China’s “need” for Pakistan as a counterbalance to Russia and India and increased Beijing’s concern that India might align more closely with Washington.

As the international situation and the domestic character of countries have changed, so too have perceptions, priorities, and foreign policies. No simple description can adequately capture the dynamism and multifaceted character of the 21st century. 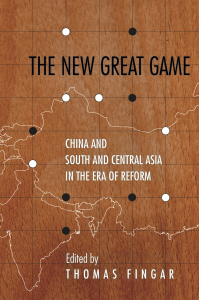 YCW: What is the role of the common Chinese citizen in affecting regional goals? Is it all top-down, or do citizens have a larger role than most observers imagine?

TF: Public opinion matters more than ever, even in authoritarian states. Prosperity, better education, urbanization, mass communication, and social media increase awareness of how government actions can affect the interests of groups and individuals, even beyond the domestic arena. For three decades, the political legitimacy of Communist Party rule in China has rested primarily on its ability to deliver benefits of growth and development made possible by its participation in the U.S.-led international system. As growth slows and the downsides of China’s developmental model (e.g., corruption and environmental degradation) become more apparent and less acceptable to the Chinese people, officials are leaning more heavily on the “nationalist” pillar of legitimacy. Doing so makes it harder for Beijing to compromise on matters that can be construed as a challenge to China’s sovereignty.

Bottom-up public influence on China’s foreign policy is increasingly diverse and significant. Chinese firms and individuals seek opportunity abroad; their actions tend to be viewed as the actions of “China.” To date, the net result is a mixed picture of gratitude for Chinese engagement and ire at China for the actions of its people.

YCW: How has China’s economic opening affected its domestic population in border areas, particularly in Central and South Asia?

TF: People in the densely populated and accessible coastal regions of China benefited first and more than the largely non-Han populations in China’s vast frontier regions. Thanks to modern communications, those left behind largely for reasons of geography have become more alienated and, in Beijing’s view, a greater threat to internal stability. Beijing has sought to extend the benefits of development to people living in the western and southwestern regions since the 1980s, but achieved relatively little until the demise of the Soviet Union changed China’s security situation. Since the 1990s, China has viewed its borders less as barriers to keep out troublesome people and ideas than as bridges to economic opportunities for people in frontier regions. This policy shift and investments in infrastructure did increase opportunities, but subsequent displacement of local minorities by better-connected and better-funded Han businessmen resulted in even greater alienation. Beijing has compounded the problem by imposing coercive controls intended to preserve order but actually increasing discontent.

YCW: In your book, you note that China has a stake in maintaining stability both domestically and internationally. However, we see provocations that are seen by others as destabilizing (e.g. South China Sea and border disputes with India). How is Beijing deciding on the balance between “standing up” and “pushing out?”

TF: Beijing regularly—and accurately—asserts the importance of peace and stability to the success of China’s quest for wealth, power, and influence through participation in the global economy. Until roughly 2009 to 2010, China’s foreign policy and actions in the region were consistent with that assertion. In recent years, however, China has acted in ways that seem inconsistent with Beijing’s declared strategy. Beijing insists—as it always has—that China is merely responding to more aggressive actions by other countries, but its explanations are not persuasive. I think that the principal reasons are internal: regime insecurity related to slowing growth and increasing public discontent.

More is involved than merely the effort of leaders to deflect attention from internal problems to putative external threats to China’s territorial integrity, however. Roughly two-thirds of the Chinese people have no memory of what China was like before the “reform and opening” and are justifiably proud of China’s achievements. They have also been imbued with the regime’s narrative on how the Party rescued China from its “century of humiliation.” Their expectations make it difficult for leaders to defuse or solve disputes with other nations.

YCW: Based on your background in the field of intelligence, what do world leaders get wrong about China?

TF: I am repeatedly surprised by the extent to which statements by pundits, media, academics, and some non-U.S. officials treat China’s GDP as the sole indicator of national power. Even more surprising—and dismaying— is the frequency of projections that China will soon “overtake” the U.S. as a global leader because it will “soon” have a larger GDP. This leads to erroneous speculation about the “decline” of the U.S. and Washington’s inability to honor its security commitments or defend the rules-based liberal international order, and to assertions that other nations must “rebalance” their relationships to tilt toward China. This, in my opinion, is silly.

China has accomplished much, but it still has a long way to go—as leaders are quite willing to admit. It has a large GDP, and it will become even larger, as befits a country with more people than any other. During the decades of China’s sustained growth, it has added more workers than the total population of the U.S., but per capita GDP and productivity remain low. Stated another way, China’s share of global GDP is almost exactly the same as its share of world population—just under 20 percent. By contrast, the U.S. produces slightly more than 20 percent of world GDP with 4.5% of the world’s population. If one factors in the relative decline of the U.S. population, the per capita U.S. share of global GDP is actually larger than it was before China joined the world economy in 1979.

China’s strategy of doing the “easy” things first has created a situation in which the only things left to do are “hard.” That is one of the reasons that reform has stalled for the past decade. Illustrative of the challenges this entails is the fact that no country has ever made the transition from “middle income” imitator to “high income” innovator without far more political liberalization than China has been willing to consider. The question of whether China can develop to that degree without fundamental political reform remains to be answered. All precedents suggest that it cannot do so.