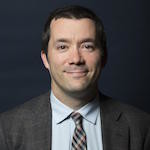 Thomas S. Mullaney is Associate Professor of Chinese History at Stanford University and Curator of the international exhibition “Radical Machines: Chinese in the Information Age.” The exhibit debuted at the San Diego Chinese Historical Museum and will travel on to the SFO Airport Museum in San Francisco, the Museum of Chinese in America in New York, and the Chinese University of Hong Kong, and elsewhere this year. Thomas is the author of Coming to Terms with the Nation: Ethnic Classification in Modern China and principal editor of Critical Han Studies: The History, Representation and Identity of China’s Majority. His forthcoming book, The Chinese Typewriter: A History, examines China’s development of a modern, non-alphabetic information infrastructure encompassing telegraphy, typewriting, word processing, and computing. This project has received three major awards and fellowships, including the 2013 Usher Prize, a three-year National Science Foundation fellowship, and a Hellman Faculty Fellowship.

YCW: What drew you to the technological developments that came out of the history of Chinese typewriters?

TM: The question itself is the most fascinating part. The inventors of typewriter keyboards in the early 19th century were predominantly inventing for the English language and were plugged into a Roman alphabet linguistic environment. From an engineering standpoint, the idea of a Chinese typewriter is mind-blowing given the absence of an alphabet or syllabic system. Western companies failed to fit the Chinese language into their technology, even if they did succeed with other languages like Arabic and Hebrew. They did not blame themselves or the typewriter for this failure; instead they turned all of this “responsibility” over to the Chinese script itself and declared it fundamentally incompatible with modernity. This was an unsatisfactory answer to Chinese linguists, engineers, and businessmen, who understood that you cannot just take a Remington typewriter and retrofit it the way you can or have for Hebrew. In this process, they ended up being as much typewriter reformers as language reformers.

YCW: So how does one put tens of thousands of characters onto one machine?

TM: The answer is that you don’t. These Chinese reformers were equally critical of the Chinese language, but were willing to subject it to all sorts of profound re-imaginations. One approach was to explode Chinese characters into pieces, related to what we know as “radicals.” But it was more complicated than simply combining different radicals from the total set of 214 from the Kangxi Dictionary, because radicals show up in many different shapes and positions. This required a painstaking review of all Chinese characters to examine how many different ways a radical can show up, in which variations, and in what combinations. After several years, a French printer in the early 19th century arrived at about 1,600–2,000 pieces, out of which they determined that it was possible to print all characters. This system, later termed “pinxing” (shape spelling), became one potential way to build such a machine. In the age of computing and graphics, this method has even come back. Only now we’re not exploding characters into radicals, but into pixels and bitmaps.

The other approach was to determine the statistical frequency of every character in the Chinese language, and then to include only the most frequent ones. This is basically the pre-history of Chinese digital humanities, like building a word cloud. After a multi-year, painstaking process, engineers and earlier scholars determined that we only need around 5,000 characters of common usage for most printing jobs and for teaching Chinese to foreign learners. This model was also applied to the question of Chinese typewriting, in the form of the “common usage” Chinese typewriter. This approach became the basis of all mass-manufactured Chinese typewriters into the early 1990s.

Each approach has its own implications and “politics.” The pinxing approach has serious implications for aesthetics, while the common usage approach required constant redefinition of the boundaries between what to include and what to leave out. For example, “common usage” varies widely, depending upon the professions of the typists. Even now, there is no single system in computing in which all Chinese characters are included, and both these approaches are still drawn upon.

“Two typesetters working to efficiently print Maoist texts would create two character racks that were entirely different. Different typists would customize their machines in entirely idiosyncratic ways, based on their own preferences for the placement of characters. Their machines and their tray beds were individualized as was their practice—hence, heteropraxy—even though the documents they produced were increasingly rote and repetitive.”

YCW: In your article on predictive text you discuss how the technolinguistic experimentations of Mao-era machines helped facilitate personal connections to the rhetorical apparatus of Maoism. What is one of your key findings?

TM: I have found an unexpected relationship between orthodoxy and heteropraxy during the Maoist period in China. Mao-era slogans and language have a repetitive element to them, as do Cultural Revolution posters and propaganda materials. When observers see this, they tend to imagine that the behind-the-scenes practices that give rise to such orthodoxy must also be uniform—i.e., that rote, repetitive speech must be evidence of rote, repetitive thought and action that produced it. But I found that the case of Mao-era typists and printers is exactly the opposite. Two typesetters working to efficiently print Maoist texts would create two character racks that were entirely different. Different typists would customize their machines in entirely idiosyncratic ways, based on their own preferences for the placement of characters. Their machines and their tray beds were individualized as was their practice—hence, heteropraxy—even though the documents they produced were increasingly rote and repetitive. This got me thinking: If we see two people standing aside one another, wearing the same uniforms, shouting the same slogans—are they the same? Or do they have their own highly individualized styles, or ways of arriving at the same slogan?

If we just examine the final output of the typist’s and typesetter’s work, all we see is sameness. It looks like total homogeneity. But if we examine the production of the sameness—how those characters got onto the page—what we find is, counter-intuitively, a situation that was far more idiosyncratic and democratically decided than the layout of the QWERTY keyboard or the arrangement of movable type in a printer’s case in the West.

YCW: Throughout this project you and your team have amassed some great support over the internet and at Stanford with the typewriter museum exhibition and the Kickstarter campaign. Did you always intend to turn this into a public project? What about this project has attracted so much interest from the public?

TM: I started this project ten years ago and the museum aspect was the furthest thing from my mind. First of all, I had no collection to share with others at that time. Around year four or five I began to collect machines, and started working through second-hand booksellers to build an archive for myself. I tried to get my hands on old computer manuals, old typing manuals—the kinds of things people just throw away.

When the new East Asia library at Stanford opened, the idea of an exhibition was raised by Zhaohui Xue. Then, Becky Fischbach, my colleague at the library, took me under her wing and taught me the basics of the fascinating but complicated processes of exhibition design. The Kickstarter idea came about when I began to consider bringing the show on tour. I spent about a month and a half coming up with the video, the prizes, and delineated very clearly what we’d need for the tour, right down to the crates for transporting the machines. The launch was a huge success—I truly could not imagine it would generate as much media interest as it did, which translated into more museums being interested. So it really developed from there.

As for the exhibit itself, even if you’re not interested in the history of modern Chinese and East Asian IT, it is simply wonderful to be in the presence of these intricate three-dimensional devices. If I discussed the project exclusively by way of academic lectures, I would not have been able to have the kinds of conversations and meet the individuals who came out to the show. The opening at the San Diego Chinese Historical Museum this past Spring was tremendous, for example. Museums are uniquely situated at the interface of research and academia, while at the same time engaging with culture, history, and politics. Libraries, too, are untapped spaces for public engagement; they are selfless, inspiring venues.

YCW: What kind of input methods or devices come next in our current world of smartphones, phonetic input systems, dictation, and predictive text?

TM: There is absolutely no linearity when it comes to the history of technological development; it cannot be predicted. But whatever the future holds, it’s likely that it won’t come from where we think it’s going to come from. For example, the text messaging revolution was an East Asian and Western European phenomenon before the United States, even if the technology wasn’t invented in those places. Secondly, many of the technologies we interact with on a daily basis were initially formulated in contexts that have nothing to do with those in which they later became popular. We see this in so-called disability technologies (technologies developed for individuals with sight impairment, different physical abilities, etc.), which were later migrated into markets for sighted, hearing-abled environments.

Finally, it’s safe to say that, in some cases, predictions come true and yet go unrecognized at first glance. In our present-day, we do not fly around in hover-cars and (most of us) don’t have chips in our heads. But algorithms have the capacity to determine who we date, who we marry, which neighborhoods we avoid. So no, we’re not talking about Terminator and Skynet, but that doesn’t mean the predictions failed in principle. The 19th- and early 20th-century engineers at Remington were brilliant, but when it came to Chinese typewriting, they were unable to think outside of an existing framework, in no small part because that framework had been so lucrative. Inventors should not be caught up in the superficiality of things, lest they be unable to keep a truly open mind.