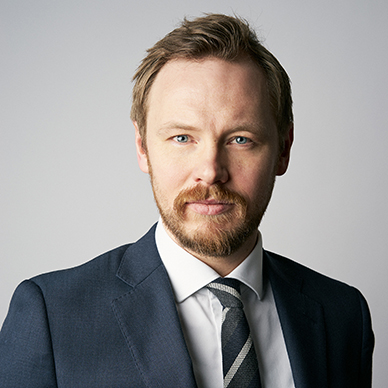 Björn Jerdén is the Director of Sweden’s National China Center. He was previously the head of the Asia Program for The Swedish Institute for International Affairs (Utrikespolitiska institutet). Jerdén’s research focuses on the international relations of China, Japan and the United States. Jerdén has a doctorate in political science from Stockholm University. He has been a visiting fellow at National Chengchi University, National Taiwan University, National Chengkung University and Harvard University. Jerdén participates in the European Think-tank Network on China and is a member of the steering group of the Stockholm Observatory for Global China. He speaks Japanese and Chinese.

Young China Watchers (YCW): In September 2019, the Swedish government issued a communication titled “Approach to matters relating to China.” The strategy is Sweden’s first comprehensive, country-specific policy paper and it marks the first time Sweden has articulated a policy on China. Can you tell me what led to the parliamentarian debate in the first place — was foreign policy at the center of the debate or were there domestic reasons as well?

Björn Jerdén (BJ): There are a number of relevant background factors. One is that our relationship with China has developed a lot over the years. From the perspective of the government, it’s not only the foreign ministry that deals with matters related to China, but basically the entire government office in one way or another, as well as numerous national agencies, government agencies, but also on the local level within our municipalities and regions, civil society, the private sector and so on. This developed an understanding within the government that there is China expertise, but it tends to be concentrated, especially within the foreign ministry, and the expertise is not sufficient to meet the needs of the wider government.

Another factor has to do with the parliamentary dynamics within Sweden. The main opposition party, the Moderate Party, got a new party leader in 2017. His name is Ulf Kristersson and he has been interested in China for many years, partly due to personal reasons. When he became the Moderate Party leader, I think that made the opposition party highlight China-relevant policy issues to a greater extent.

It also has to do with more recent developments in the relationship between Sweden and China. Swedish citizen Gui Minhai, who was based in Hong Kong, was kidnapped from Thailand in 2015 and detained in China. This led to a period of tension in the relationship and in 2018 the Chinese foreign ministry, spearheaded by its embassy here in Stockholm, began a campaign to very actively participate in Swedish public debate, often with quite a critical tone. This caught a lot of attention and put China-related issues high on the agenda.

There is a fourth reason that has to do with the wider international environment, both within the European Union, as well as between the United States and China. This international dimension put more focus on China within Sweden. All of these issues contributed to the China strategy and the need to increase our knowledge about China in the long term, in order to be able to handle these relations in a good way. The China center that just started now is one concrete result of that ambition.

YCW: The issue of U.S.-China relations is an inescapable part of the debate in every European member state. The European Council on Foreign Relations published an opinion poll that surveyed how citizens of member states would prefer their country to align in a possible confrontation between the U.S. and China. For Sweden, 24 percent of people stated that they would want Sweden to stand behind the U.S., while five percent preferred China. The remaining 71 percent would prefer for the country to be neutral. How do you see this translating in the Swedish policy debate in terms of engagement versus containment vis-à-vis China?

BJ: I think in the Swedish case, those terms are not really commonly used to capture the situation that Sweden faces. What politicians like to talk about instead is to look at relations with China in terms of opportunities and challenges. This might seem very obvious because in every state-to-state relationship you have opportunities and challenges. But I think this sort of captures Swedish general thinking. I think what this means is that a containment or decoupling policy is not on the table at the moment since the government believes that we also have many opportunities in this relationship.

One thing that has changed in Sweden — as well as in many other European countries in recent years — is that issues that previously tended to be seen only in terms of opportunities are now also seen as containing challenges; Chinese investments in Sweden, for example. Having this kind of strategic thinking requires knowledge because you always have to be able to see the opportunities and challenges within a particular area and how to balance them.

YCW: Can you tell us more about the focus of the center and how you intend to improve knowledge and existing expertise on China?

BJ: When it comes to the overall theme of the center, the work will be research-based and policy-relevant. We will focus on issue areas of special relevance to Swedish interests. The Swedish China strategy from 2019 provides a starting point as it lists Sweden’s relations with China under a number of headings. It contains security and defense, trade and economy, climate and the environment, human rights, China as a multilateral actor and a development aid provider, technology and innovation, research and higher education, and culture and media.

This is a broad mandate, so it’s important to find synergies and opportunities for collaboration with other institutes and universities in Sweden. The idea is to hire staff that is responsible for different wider-issue areas. You need people who know a lot about China and ideally know Chinese, but who also have expertise in specific areas.

Even though we have a national mandate, we work in a global environment of knowledge production, so we won’t only be interacting with Swedes. We will work very actively in international networks in China and Asia, in America, and particularly in Europe, since the EU angle is such a cornerstone of the Swedish China policy. No matter if you work on climate or security the EU angle will be there, so the entire center will be very much involved in European networks and discussions.

YCW: What do you make of the knowledge capabilities on China in the various EU member states? Do you think every country needs a China-specific institution?

BJ: I would say that it’s necessary for every EU country to build up a strong domestic China knowledge base. This is necessary in order to arrive at a common European understanding, which from a Swedish perspective is crucial to forging a common EU policy regarding China. Having said that, I don’t think there’s one model that fits for every country; The situation looks quite different in each country — both within the government and between the government and universities, think tanks, and private foundations. Different countries need to arrive at what works for them.

I’m happy to see that there are conversations happening in other countries — as well as in Brussels — on strengthening domestic China expertise or common European initiatives. Both of those are necessary. You can’t strengthen a common European expertise without having the local expertise as well; You need that to build on.

YCW: Do you believe there are lessons to take from the way the EU handled trade and investment when it comes to climate change negotiations?

BJ: I think those policy areas differ to some extent in regards to relations with China, but they also have some similarities. The common view in Europe for many years has been that China is such an important economic actor — with such a big market and many successful multinational companies — that it’s necessary to deal closely with China. In that sense climate policy resembles that, since there is an awareness in Europe that it’s not only necessary to get China on board for meeting the climate challenge, but also to make China take on a proactive and responsible leadership role.