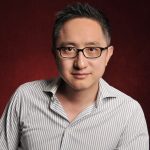 Hao Wu is an award-winning documentary filmmaker. Born and raised in China, he now resides in the U.S. Wu is the co-director of “76 Days,” a film documenting the 76 days of Wuhan’s lockdown at four of the city’s hospitals. The film shows the human impact of the virus through the stories of healthcare workers, patients, and their families, captured on film by co-directors Weixi Chen (Esquire China) and a second reporter who wished to remain anonymous, both of whom covered the initial outbreak in Wuhan.

Before making “76 Days,” Wu won the 2018 Grand Jury Award at SXSW for his feature documentary “People’s Republic of Desire,” about China’s live-streaming phenomenon. His latest short, “All in My Family,” is a Netflix Original documentary and launched globally in May 2019.

From 2008 to 2011, Hao Wu was a fellow at New America, a Washington D.C.-based think tank. His writing has appeared on Time.com, Slate.com, Marketplace Radio, Straits Times, China Newsweek, and China Daily. He is a member of the Documentary branch of the Academy of Motion Picture Arts and Sciences.

Young China Watchers (YCW): While reviewing the footage, did you see a visible change in attitudes toward medical professionals during Wuhan’s outbreak and, if so, when did this occur?

Hao Wu (HW): In the early days of the lockdown, the situation in hospitals was absolute chaos and some people were being turned away. Obviously, there was anger among those desperate to be admitted. However, in general, people were very grateful that doctors were willing to treat them despite the risks of transmission. They also felt relieved that hospitals offered a safe place to stay to prevent infecting family members.

The virus affected the growing tensions between patients and medical workers in China’s healthcare system. There had been growing resentment about higher healthcare costs and the quality of care. This was reflected in attitudes toward healthcare staff in normal times. However, a sense of goodwill emerged during the outbreak as medical workers cared tirelessly for patients and due to the government’s decision to provide free treatment for COVID-19. [For more on this issue, also see Yangyang Cheng’s piece for our partners at SupChina.] 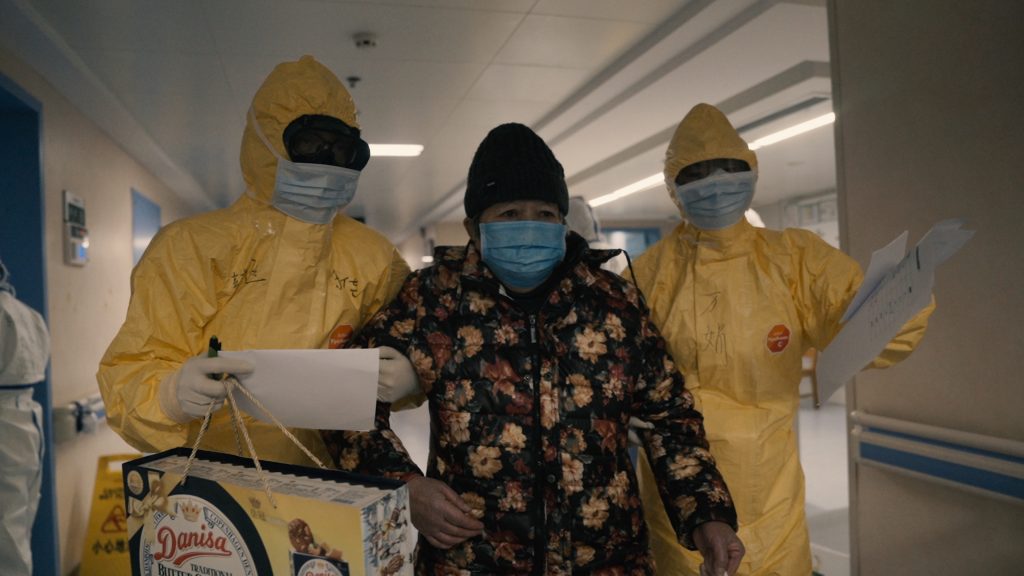 Elderly female patient of COVID-19 accompanied by two nurses after being admitted to a hospital in Wuhan, China. As seen in “76 Days,” directed by Hao Wu, Weixi Chen and Anonymous. Image courtesy of MTV Documentary Films.

YCW: “76 Days” has no mention of the government’s handling of COVID-19 or politics more generally. Why did you choose to take this angle?

HW: I was extremely fortunate to have found my two collaborators who captured such powerful human moments and stories from the frontline. We experimented with cutting in news commentary and interviews which we had conducted with two whistleblower doctors and a dissident, but they didn’t connect well together. The inclusion of interviews distracted from the emotional power of the footage and removed the viewers from the very claustrophobic environment of the hospitals. Instead, we chose to focus on raw stories from the frontline, which grant the audience an uncolored view of the behavior and actions of the characters.

“We chose to focus on raw stories from the frontline, which grant the audience an uncolored view of the behavior and actions of the characters.”

YCW: What lessons did you want your audience to draw from Wuhan’s experience?

HW: There are still political divisions about the best way for societies to respond to COVID-19 in many countries. In the short term, I wanted people to witness the horrors of the virus and show that it can destroy individuals and families. An infectious disease like COVID-19 kills regardless of geopolitical differences, so I also wanted to highlight the importance of working together as a community to overcome the virus.

In regard to the long-term impact of “76 Days,” I wanted to create visual evidence for people to look back on in order to understand and remember the pandemic. When I was researching the Spanish Flu, the last truly global pandemic, I felt a sense of sadness that there were few visual recordings or personal stories to revisit the event. Human beings have a tendency to forget trauma, yet our encroachment on wildlife habitat means that another pandemic is bound to happen. I hope the film helps people learn from this experience so we can better manage our response next time round.

“I wanted to create visual evidence for people to look back on in order to understand and remember the pandemic.”

YCW: Did the initial reaction of the two co-directors you worked with cause you to focus on targeting an international audience or was that your intention from the outset?

HW: Targeting an international audience was my plan from the very beginning, as I was approached by a U.S. network before joining this project. Later on the network dropped out, but I knew early on that COVID-19 was an extremely political topic. I didn’t want to deal with China’s censorship system to get the film released there, so I remained focused on the international market. What happened in Wuhan is of global interest and the more I worked on the film, the more I realized how universal this story truly is and how relatable the emotions on screen are.

YCW: The recent news that “76 Days” has qualified for an Oscar nomination has gained huge coverage on Chinese social media sites, although it has also prompted criticism from netizens about your loyalty to China. Does this domestic attention make you reconsider releasing the film in China?

HW: There are two reasons for the reaction on social media: The increased coverage of the Oscar campaign in English-language media has been picked up there; Also, the one-year anniversary of Wuhan’s lockdown on January 23 made this a sensitive topic.

Many Chinese people have a complicated relationship with external recognition, such as the Oscars. On the one hand, some feel proud and appreciate the power of the film’s recognition as people outside of China watch and understand what truly happened in Wuhan. Others don’t care how the film, or the event, is perceived, but just want to be able to watch “76 Days” and keep the footage as a historical record for Chinese people. There are also netizens who have tried to come after me with personal attacks for not being patriotic enough.

“Many Chinese people have a complicated relationship with external recognition, such as the Oscars.”

There is a deep scar on the psyche of most Chinese people and some who watched the pirated version said that they cried non-stop. The social media comments reflect genuine emotion and the hurt that is still felt. Among these feelings, people are looking for some kind of comfort.

I’m still waiting to see what plays out in the coming weeks, but I would love to get the film distributed in China because the story is so important to the people of China. However, this depends on whether we can find a distributor, how the censors will react to it, and whether they will demand changes. Right now, “76 Days” is apolitical and I don’t want to change the tone or how the film portrays tragedy.

YCW: Most international viewers will watch “76 Days” via a virtual film festival at home or socially distanced in a cinema wearing masks. How do you think this will affect the experience of viewers?

HW: It’s difficult to tell how viewers will react, having never been in a live audience. The only indicator I have are messages or tweets, but these are not necessarily representative of the average viewer.

The feedback I have received has shown that many people were moved by the film because they felt that they had experienced the same story in their respective countries. I’ve also had people saying how well China has managed the virus, in contrast with the U.S. Some have responded in surprise about the modernity and size of Wuhan, which they had imagined to be a rundown wet market.

When we were making the film, we wanted to pay tribute to the resilience of the frontline workers and the patients who had passed. We weren’t considering how people would compare and contrast the story with their own political or healthcare systems. My goal as a storyteller was to make the story relatable and to resonate with people from across the world, so this reaction has been a pleasant surprise.